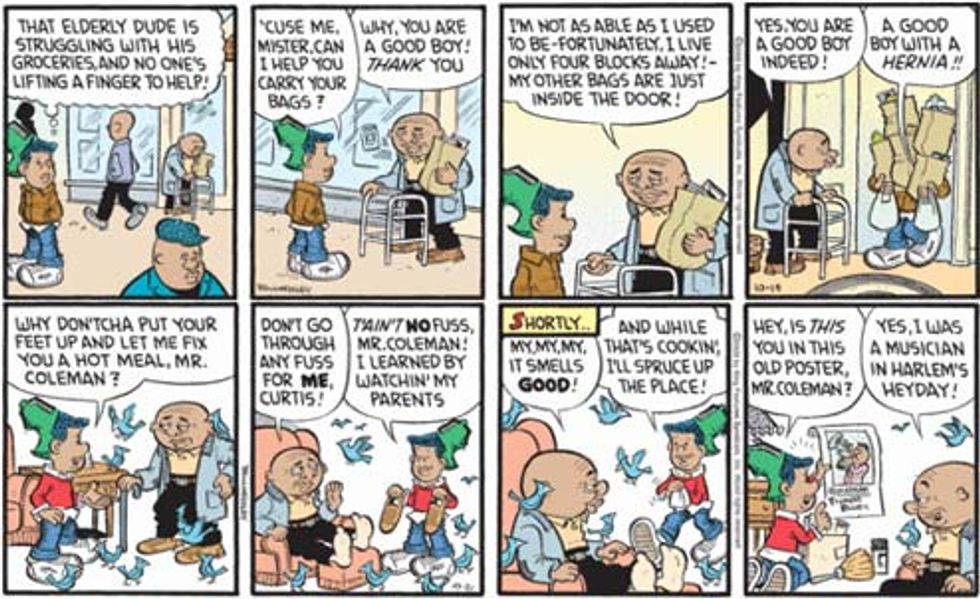 By the Comics Curmudgeon
Hello, readers, and welcome to a very special Carton Violence, in which we will turn our eyes away from the foul nightmare that is the editorial pages, and to the innocent, carefree comics pages, which are probably in the back of the section with the TV listings in your local paper! (Ha ha, just kidding, I realize none of you actually read the "paper".) Do you know that this Saturday is National Make A Difference Day, when you're supposed to, like, volunteer or something? Of course you don't, and here's why: because the White House apparently decided that the best way to publicize this to the masses was to encourage the writers of newspaper comic strips to plant pro-volunteering propaganda in their word-and-picture boxes. Do they think that it's 1955? Isn't this the same group of people who won a presidential election entirely by using Twitter? Anyway, the results, as you'll see after the jump, are mostly laughable and terrible, when they aren't actively offensive.

Luann, a wacky comic strip about teenage girls, is the only strip that will say aloud the dreaded name of the cruel overlord forcing teenagers to "volunteer" to work in socialist re-education camps. Delta, the character on the left, is title teen Luann's "black friend"; all "black friends" must by law either be sassy or saintly, and Delta has chosen the saintly route, inspiring everyone with her bout with cancer and generally forcing the other girls to do goody-goody things when they'd rather stay home and listlessly consume pop culture.

There was also this story last year where Delta had an impromptu encounter with Obama while looking for a bathroom on a DC field trip. Was this meant to echo Larry Craig's amorous activities? Who knows! But the fact that she's talking to the president in erotically charged terms (“turned two teens on," hmmm?) while her friends engage in filthy sex banter (“Big O," HMMMM?) can only mean one thing: this whole "volunteer" thing is a front for Obama's plot to lure teenage girls into white slavery (or, in Delta's case, black slavery).

Only one cartoon dares to tell the truth about this situation: that volunteering, when gently and ineptly encouraged by the government, is the equivalent of slavery. This realization delights the Obama stand-in, the King of Id, widely known and hated by his subjects as The Fink. Does the president glare down from us from his ivory tower, alternately disgusted by our selfless willingness to help others and cackling with glee at how easily this do-gooding streak in American culture can be exploited for his sinister ends? Almost certainly!

Is there anything that can save the world from Obama's terrible army of volunteer sex slaves? There is, in fact, one last hope, and that is America's spectacular incompetence, as demonstrated by the lovable Archie gang! Seriously, Americans can't even to do something like cleaning and painting a school cafeteria -- which many foreigners find so easy that they'll do it for less than minimum wage, even while risking arrest -- without completely fucking it up. So how do we expect volunteers to do any of the things that Obama demands of them -- ending homelessness, cleaning up trash, convincing old people to commit suicide so their desiccated remains can be processed into a concentrated high-protein foodstuff -- if they're just going to make a terrible botch job of it?

Obviously, we need to attract the best and brightest of America's young people by making the process appealing, as in these two installments of Curtis. These strips actually making volunteering look like something nice you might do for somebody, rather than an organized do-gooder activity! They also imply that, if you offer to help an elderly total stranger with something, he'll invite you to his apartment, which is full of stray birds that he's lured in and trapped there, and regale you with tales of his career has a Harlem jazzman! Because what young people want as an encouragement is the prospect of listening to some old dude ramble on about a musical genre that they hate while birds shit on them.

No, only one strip knows what will get the kids today interested in volunteering. Shockingly, that strip in B.C. You might remember that B.C.'s creator got all Jesus-y later in his life and created a baffling world of Christian cavemen; sadly, he died a few years ago, and the strip is now in the hands of his heirs, who have retooled it into a sort of slightly forced wackiness. So while Johnny Hart would have no doubt approached this week by showing President Antichrist giving each dead-eyed volunteer the Mark to wear on their foreheads, the current scribes instead give us dogs handing out bones, a rabbit apparently harnessing a turtle as a beast of burden for agricultural purposes, and some dude running screaming to the hills for no readily apparently reason, which all adds up to one thing: Kids, if you go down and volunteer, they will give you the good drugs, we promise!

So on my own blog, I have this little running gag about how Marmaduke is a flesh-eating hellhound, so I made a joke about how Marmaduke is helping this serial killer dig graves. Ha ha! Nothing could be further from the truth! In fact, Marmaduke has just left an unspeakably large turd on this poor guy's lawn. He "volunteered" it, out of his anus.