Catholic League Declares Itself To Have Broken Jon Stewart's Spirit 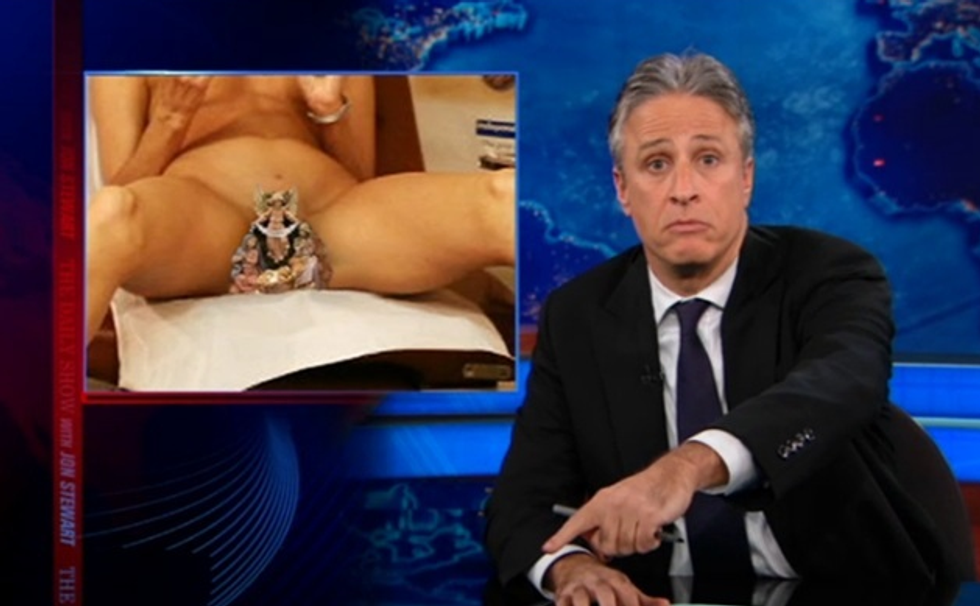 Here is the original manger joke, from the April 16 episode, which as you can probably gather stemmed from life-size leprechaun and Rick Santorum supporter Foster Friess's comments that "gals" in his "day" used to put an aspirin between the knees to prevent pregnancy/even having sex.

Well, the Christmas lovers weren't too psyched! Via Yahoo! News, we have these two statements that Catholic League president Bill Donohue released last week. In them, Donohue basically gets mad that the liberal media wrote stories about Stewart's Monday show but declined to even mention the manger joke. The nerve! So that led to the most wonderfully procrastinatory, vague and huffy statement the Catholic League could muster:

The cover-up is revealing. This episode of “The Daily Show” was done to protest Fox’s alleged indifference to the “war on women,” and in doing so Stewart not only made a vulgar attack on Christians, he objectified women. We are asking Stewart to apologize. If he does not, we will mobilize Protestants, Jews, Mormons and Muslims to join us in a boycott of his sponsors. Moreover, we will not stop with a boycott; there are other things that can be done to register our outrage. We are prepared to spend the money it takes to make this a nationwide issue, and we are prepared to stay the course. Tomorrow we will have something definitive to say, one way or the other.

Hahaha, so what happened the next day? What did they have "definitively" to say??

Our effort against Stewart includes asking his most consistent sponsors to pull their advertising (if necessary, we are not ruling out a boycott of their products), and a lengthy public relations campaign. The goal? To get him to apologize. If that doesn’t work, we can guarantee that his reputation will never be the same.

Anyway, cut to the Clearwater event, in which Stewart is quoted by the Tampa Bay Times as saying:

I'm not going to censor myself to comfort your ignorance.

Nice to know the Catholic League is on Jon Stewart’s mind. Unfortunately for him, we’re going to hang around for weeks, contacting his sponsors and religious leaders from all the major religions. We’re sending them the “vagina manger” picture he is so proud of, asking everyone to pressure Comedy Central into getting Stewart to apologize.

We really don’t need to boycott anyone as the picture is so indefensible—putting a nativity scene ornament in between the legs of a naked woman—that no one save the maliciously sick would even try to defend it.

The good news is that Stewart lashed out at us in a serious moment—the e-mails that are pouring into Comedy Central are obviously getting to him. We’ll see who is branded as “ignorant” when our campaign is done.