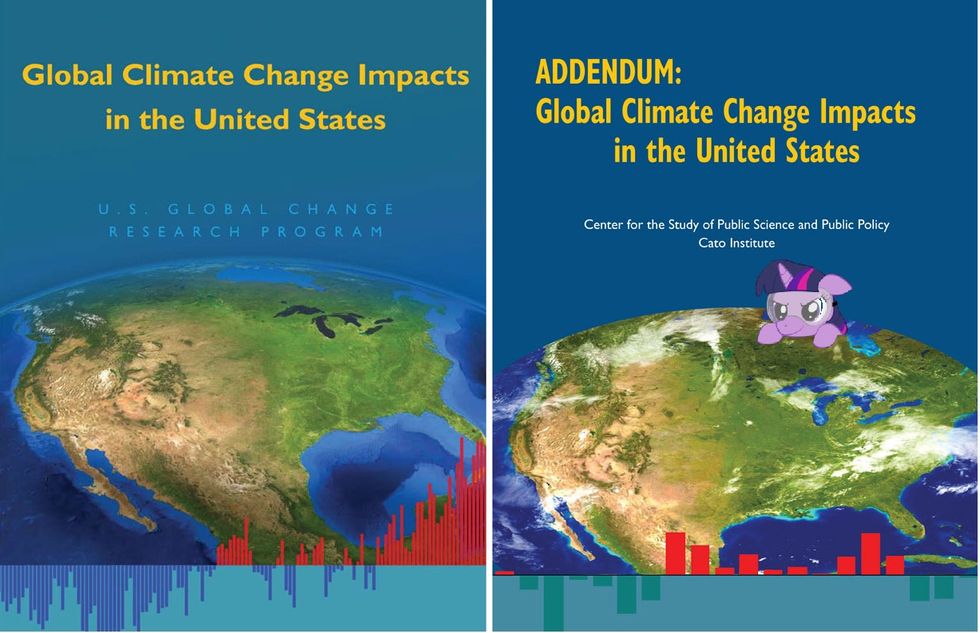 Remember a few months ago when hilariously titledfake ripoffs of bestsellers were all over Amazon's e-book store -- 35 Shades of Grey, or I am the Girl with the Dragon Tattoo, that sort of thing? The playful jokesters of the Cato Institute are using their Koch Industries Megabux to top that! They will soon release a delightful "spoof" of a 2009 US Government report on climate change, except that where the real report looks at real science, the fake "Addendum" contains the reassuring news that climate change is no big deal, hooray!

The shrill Marxists at Scientific American have the story:

The addendum matches the layout and design of the original, published by the U.S. Global Change Research Program: Cover art, "key message" sections, table of contents are all virtually identical, down to the chapter heads, fonts and footnotes....

"It's not an addendum. It's a counterfeit," said John Abraham, an associate professor at the University of Saint Thomas in Minnesota who studies clean power sources. "It's a continued effort to kick the can down the road: A steady drip, drip, drip of fake reports by false scientists to create a false sense of debate."

The 2009 report, available online, was prepared for Congress as "the most comprehensive and authoritative report of its kind" by scientists at the U.S. Global Change Research Program, and its findings are regularly updated by that group (spoiler alert: They have not decided they were wrong).

Cato claims its "Addendum" was driven by "the recognition that the original document was lacking in scope and relevant scientific detail." For instance, the original report suggested that climate change was already having significant effects, and that we should maybe consider doing something about that, because c'mon, that can't be right. And they've had a fair degree of success getting that message out, as PBS's Frontline recently explored.

The unflattering imitations start right on the cover of the Cato version, which has the same font, color, and general design, including even a very scientific looking bar graph with global mean temperatures.

Of course, where the real report has a graph covering 108 years of data, showing a sharp rise over time, the Cato graph covers only the last 19 years, and reassuringly shows a random pattern, and not an upward trend. Stop worrying your little heads, you nervous nellies!

Climate Science Watch (the source of the illustration above, before our single improvement) details other subtle adjustments in the Cato presentation of climate science. Notably, not even the Cato Institute seems to feel it can get away with outright denial of global warming; now, it admits "Climate change is unequivocal and human activity plays some part in it,” so instead they mostly just downplay the extent and significance of climate change:

So, sure, maybe the Cato version deliberately apes the design, layout, and overall feel of a government report, but is anyone likely to be snowed by these deliberate similarities? One climate change denial blogger is quite certain that's impossible, because if readers "can’t read 'Cato Institute' clearly printed on the front and back cover, then they probably aren’t capable of reading and interpreting the original report either." We guess that settles it!

Scientific American also notes that this isn't the first attempt by deniers to pass off fake science by making it look like the real thing. In 1998, a petition questioning the science underlying the Kyoto treaty "copied the format and style of a peer-reviewed article" in the very real Proceedings of the National Academy of Sciences, and in 2009 the Heartland Institute (recently notorious for those "Derp derp the Unabomber believed in global warming" murder billboards) published a fake-science report by the "Nongovernmental International Panel on Climate Change" (NIPCC), a denialist group which just happens to sound a hell of a lot like the UN's real science comittee, the Intergovernmental Panel on Climate Change (IPCC).

Considering how much wingnuts hate evolutionary theory, this is a remarkable use of the classic evolutionary strategy of adaptive mimicry. (Even creationist Ray Comfort has tried this, releasing an abridged edition of On the Origin of Species with a largely-plagiarized 50-page introduction explaining how evolution is fake.)

Rather than simply pointing out and correcting these shams, though, we think it might be more effective to just join in the fun. We look forward to advertising on conservative websites the newest release from Wonkette Books: Adam Smith's The Wealth of Nations, revised and extended by K. Marx and F. Engels.