CBS Anchor Conducts The Thorough 'Pizzagate' Investigation No One Asked For 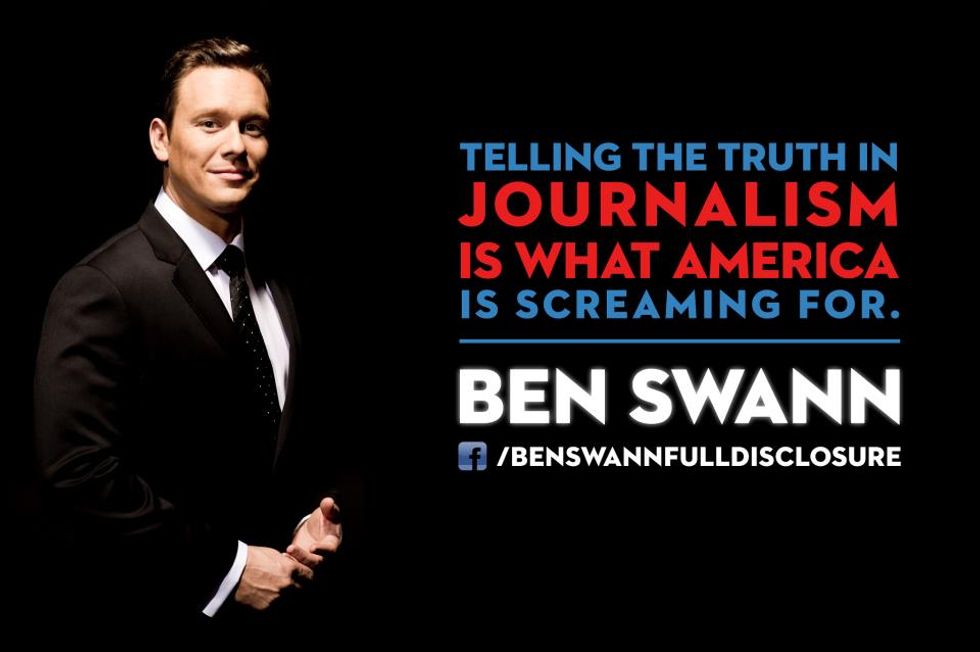 For the past several years, every so often, there is a thinkpiece lamenting the coming death of investigative journalism. Well! Lament no more, for CBS Atlanta anchor Ben Swann is bringing it back! Unfortunately, his method for doing so was not entirely unlike burying your cat in a certain Pet Sematary in Ludlow, Maine -- it came back, but it came back wrong.

In a six-minute segment airing Tuesday night, Swann investigated the idiotic 4chan conspiracy theory known as "Pizzagate." You know, the one where Hillary Clinton and John Podesta run a secret child sex ring out of two pizza places in Washington, D.C.? And are also involved in secret Satanic rituals of some kind? The one that is very, very stupid? Yes, he ran a very serious investigation on the "facts" of Pizzagate, with a straight face and everything.

Here it is for you to enjoy:

Swann used this time to point out a number of the "coincidences" that "internet investigators" (aka trolls and tin-foil hat aficionados) say prove that Comet Ping-Pong and Basta Pizza are somehow involved with child sex trafficking. Like the fact that the guy who owns Comet Ping Pong was listed on GQ's "50 Most Powerful People In Washington, D.C." list. You know, because the person putting that list together was like "OH, definitely gotta put James Alefantis on this list, because of that child sex slavery ring he runs!"

He also notes that Comet Ping Pong was mentioned, by name, in the Podesta emails, and also that there was some kind of handkerchief featuring pizza places of D.C, which is also "evidence" of some kind. I guess talking about pizza a lot is kind of weird if you are a person who hates delicious food? Or doesn't know any Italian people? I mean, sorry if I'm not terrifically shocked that an Italian dude is going around talking about pizza a lot, but I also just had a 20 minute conversation about meatballs and whether or not they'd be OK if I made them without veal.

Swann also notes the fact that the former logo for Basta pizza is a swirly triangle thing, which he says resembles the symbol for "boy lovers."

Either that or it is a pizza slice? Which also often comes in the form of a triangle? Oh, also Comet Ping Pong sometimes has bands, and some of the bands are "weird" and one of the bands has a video where there is ANOTHER TRIANGLE. Oh no! Not a triangle!

One of the greatest hallmarks of YouTube Conspiracy Videos is the obsession with secret symbols being placed everywhere that supposedly mean things. Usually, a triangle anywhere denotes some kind of allegiance to the Illuminati, but I guess in this case it is pedophilia? I wonder if they think there's someone whose job that is, to put secret symbols into music videos and pizza logos? Like, some guy from the Illuminati or the Pizzagate commission comes by and is like "Hey, you think we could get some more symbols up in here so that weirdos on the internet can point at them and go 'Conspiracy!'?" I honestly kind of hope so.

At the end of the segment, Swann notes:

“Keep in mind again, there is no proof here that there is a child sex ring being operated out of a D.C. pizza parlor. Investigators have already proven there is nothing to this story, right? Well, actually, no.”

He questions why police have not investigated this theory yet (probably because they are in on it as well!), and notes that it hasn't actually been "proven" false yet.

The thing is, there are 85,000 dumb ass conspiracy theories on the internet. Look! I just found a guy who thinks Elvis is alive and that he is his doctor!

And here's Randy Quaid expounding on his theory that the illuminati are murdering Hollywood celebrities, for reasons:

Why haven't the police investigated any of those claims? Because they are stupid! They are very, very stupid. I have watched myriad YouTube conspiracy videos, and nearly all of them include a ton of "coincidences" and symbols and other stupid things just like "Pizzagate" does. The police cannot possibly spend their time investigating every stupid thing someone on the internet comes up with.

This is, however, not Swann's first dip into tin-foil hat land. Here he is "investigating" the theory that the Sandy Hook and Aurora, Colorado shootings were not the work of "lone gunman."

The Daily Beast reports that Swann has previously done "work" for Russia Today, an international television station funded by the Russian government, where he did some other interesting things.

He was featured in segments in which he denied the Russian government shot down Malaysia Airlines Flight 17 and alleged that an RT anchor resigning in protest on-air was a “stunt coordinated with a Neo-Con Think-Tank and driven in part by Daily Beast writer James Kirchick.”

He is also currently "crowd-funding" a half-hour documentary through his Facebook page all about how the United States and a bunch of other countries intentionally created ISIS. For reasons. Of some kind.

Naturally, dude is also very tight with the Republican party, though he claims he also wants to dismantle the two-party system.

In 2013, Swann was a featured guest at the Republican Liberty Caucus national convention alongside Ted Cruz, Reince Priebus, and Rand Paul. He also hosted several events with local RLC chapters, including a $350-per-table “private lunch.”

When The Daily Beast contacted CBS 46 News Director Frank Volpicella, he stated that "I will say Ben was meticulous with his fact-finding and sourcing on his Reality Check segment."

Meticulous, sure. Facts? Not so much!

How do we come to terms with the fact that we are moving towards a society in which a large segment of the population would take the Weekly World News seriously if it were to come back into print? Where actual facts are met with more suspicion than bizarre speculations based on no evidence whatsoever? The people who believe in things like Pizzagate are supposed to be wearing sandwich boards and too many sweaters and hollering at you while you wait for the bus, not on the nightly news. But here we are!