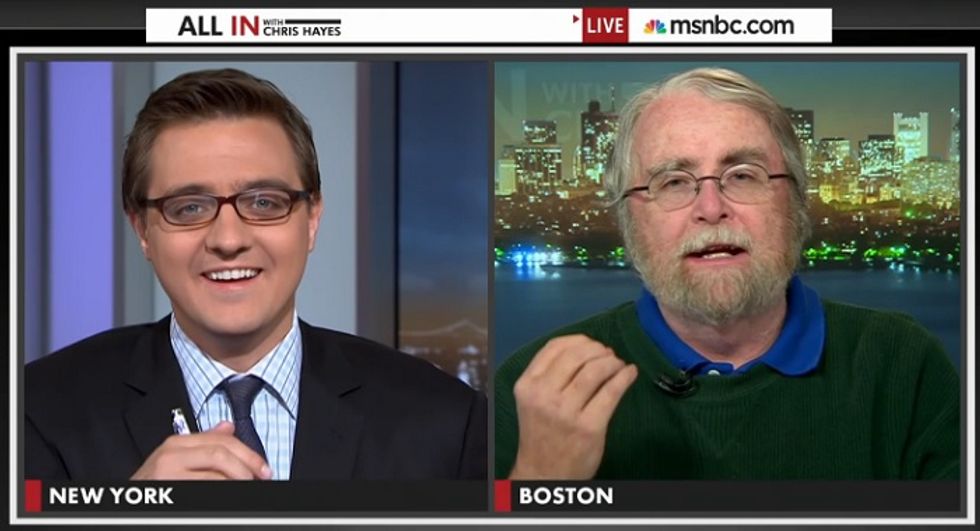 Conservative intellectual thought leader George Will made an ass of himself on Fox News Sunday this week, claiming "Some doctors say Ebola can be transmitted through the air by 'a sneeze or some cough.'" The alleged source of that "information," the University of Minnesota’s Center for Infectious Disease Research and Policy, was quick to say, "Nuh-uh, George you are very very WRONG, you dip."

The authors of the piece, Lisa Brosseau and Rachel Jones, both of the University of Illinois, told PolitiFact that they had recommended only that hospital workers caring for Ebola patients should wear respirators, not just surgical face masks, to eliminate the chance of a sick patient getting spit on them:

"We were concerned about aerosols generated by infected patients in the most severe stage of the disease," Brosseau said.

Will had mistakenly connected the pathway of infection in a hospital room with someone coughing or sneezing in public.

But hey, maybe an Ebola patient in the most severe phase of their sickness -- bleeding, vomiting, and having diarrhea everywhere -- just might sneeze on you at a cocktail party, so Will still could have a point. As the National Review happily acknowledged, Will's comments "[reopened the] settled science on airborne ebola."

Chris Hayes invited Charlie Pierce to share his thoughts on Ebola Panic. Pierce lamented that he missed the old, merely rightwing George Will, who "at some point in the last five years" seems to have been "taken over by the spirit of Alex Jones. His initial foray into crazyland was when he became a climate-change denialist. Now he's an Ebola truther. The FEMA camps are not far down the road, I'm telling you."

Pierce likened the current wave of Ebola nonsense (not that Ebola is nonsense, just that there's a lot of nonsense about Ebola) to the "NAFTA Superhighway," which somehow "existed as an issue even though the NAFTA Superhighway doesn't exist." On the bright side, Pierce and Hayes both noted that not too many people seem genuinely freaked out over Ebola, although of course that "depends on which particular closed loop of a media universe you happen to exist in."

Watch and enjoy. The focus on George Will and other people pounding on our fear reflexes begins around the 8-minute mark.