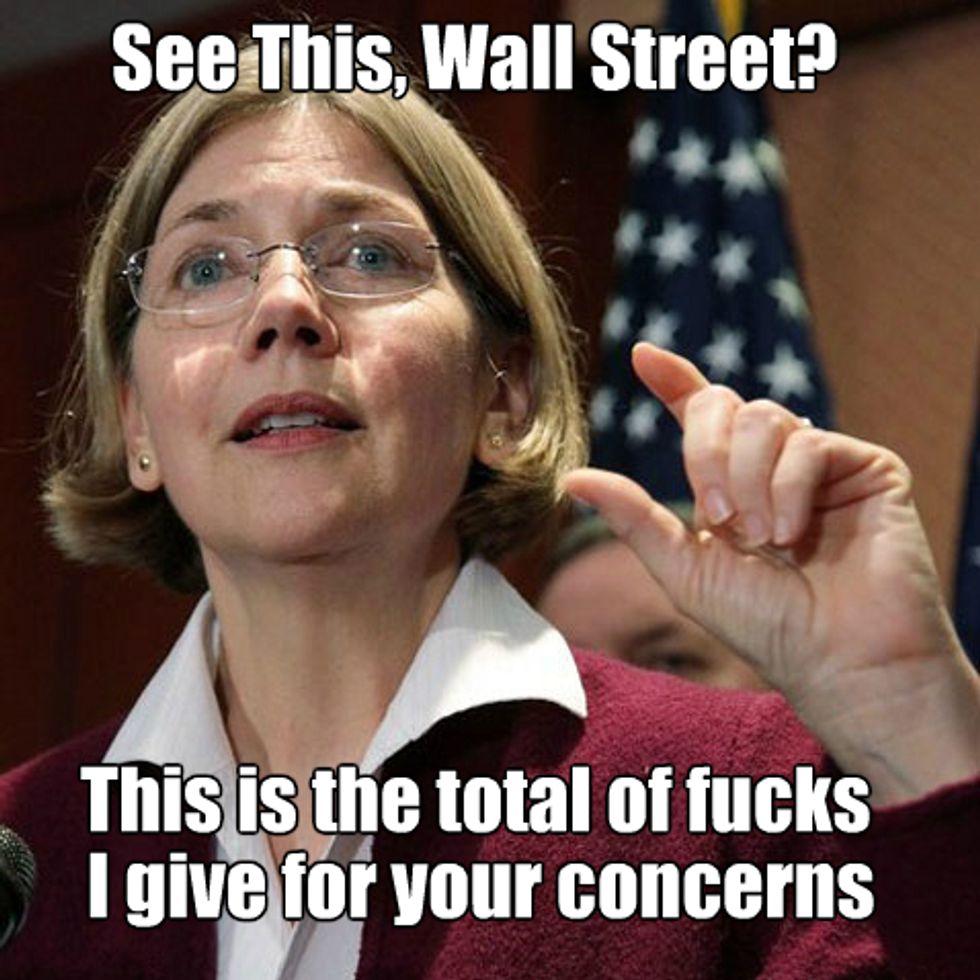 Seems JPMorgan Chase CEO Jamie Dimon isn't familiar with certain truths about what you should never do: never tug on Superman's cape; never start a land war in Asia; and never EVER tell Elizabeth Warren she doesn't really get the intricacies of the banking system. But that's exactly what Dimon did in front of a roomful of bankers at a meeting in Chicago Wednesday. We're looking forward to her inevitable reply, because Elizabeth Warren does not suffer pompous CEOs gladly.

“I don’t know if she fully understands the global banking system,” Dimon fretted, but he also generously offered to meet with her any time she wants, so he can explain it to her, presumably in small words that she can grasp. It's a line that Warren is likely to make Dimon regret -- our impulse would be to spray paint it all over his Gulfstream, but she's a lot classier than that. What he's really worried about is that she understands his business all too well. While Warren declined to comment on Dimon's statement, she actually answered his pretend concerns in advance, in a speech she gave back in April:

I was in Washington in those months after the [financial] crisis, but I wasn't one of the guys. I hadn't worked for a Wall Street bank. I didn't play golf with the CEOs. I hadn't smoked cigars at the club. Nobody talked about this during my time at the congressional oversight panel. But over the life of that panel, 10 different people served on the panel: nine guys, one woman -- me. Not many people thought about it or noticed it because this kind of imbalance is so pervasive across finance. ...

Maybe bankers are like gun humpers in that respect -- they seem to think that since people who call for sensible regulations on gun safety occasionally call a "magazine" a "clip," they're utterly incapable of seeing why guns are wonderful and beautiful and keep us safe. The biggest problem for Jamie Dimon isn't that Warren doesn't know how banks work; it's that she doesn't share his worldview.

Warren and Dimon also have traded dueling anecdotes about their previous meetings. In her book A Fighting Chance, Warren tells a story about meeting with Dimon shortly after she became a senator:

She said their conversation heated up after Dimon complained of stiffening regulation, and that she warned him [Consumer Financial Protection Bureau] rules might take effect that would spell trouble for the bank.

Warren said Dimon “leaned back and slowly smiled,” and then replied, “So hit me with a fine. We can afford it.”

Dimon's office has denied he ever said any such thing, but we're inclined to believe Warren on that one. At his speech Wednesday, Dimon countered with an anecdote of his own, saying that he'd met with Warren to discuss regulation of credit cards while the CFPB was being put together:

He quoted her during the encounter as complimenting the bank’s product: “By the way I have your credit card, and I love it.”

Well, then, guess that makes all of Elizabeth Warren's alleged antipathy to Wall Street just a lot of hooey, doesn't it? She may talk tough about cracking down on banks, but she just loves our card, so gosh, she's one heck of a hypocrite. All she really needs is for a banker to sit down and explain to her how the system works, and then she'll see the light.

Which sounds fine, as long as we watch that conversation on pay-per-view. In our Elizabeth Warren T-shirts, of course.