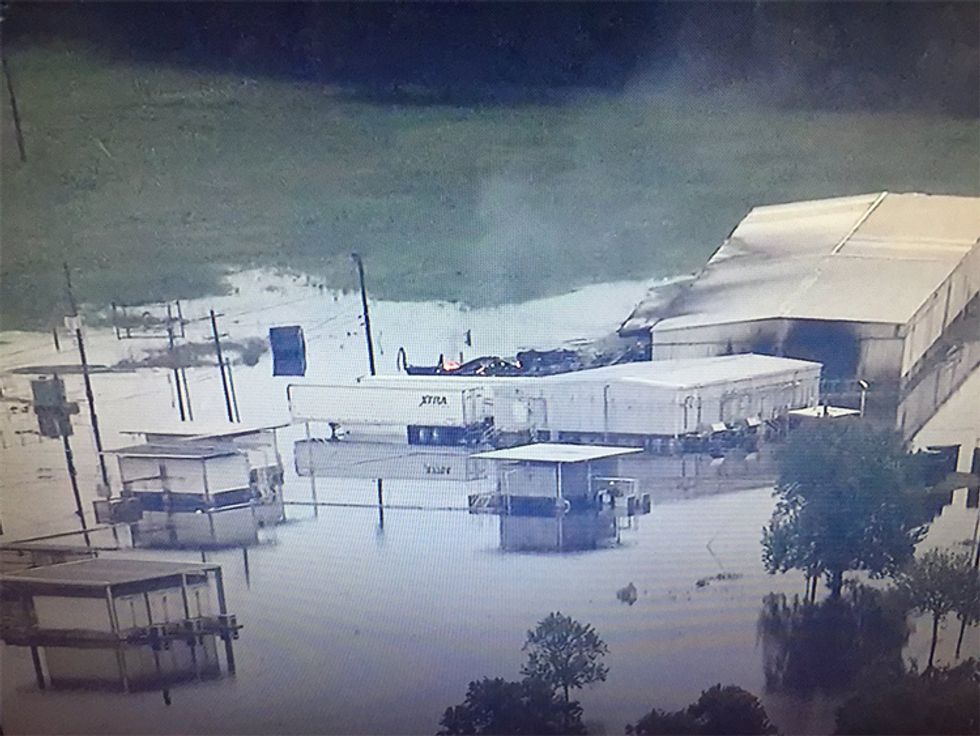 Heck of a pop, Brownie.

Volatile chemicals stored at that flooded Arkema plant in Crosby, Texas, either caught fire and exploded, or exploded and caught fire last night as the storage containers' refrigeration units failed, according to the plant's operators and law enforcement. The company said the Harris County Emergency Operations Center informed it that two explosions had taken place at the plant at around 2 a.m. local time. The chemicals, organic peroxides used in the manufacture of plastics and other products, are stored in refrigerated trailers in several locations on the plant grounds, and more explosions are likely as the chemicals lose refrigeration and begin to warm.

A company spokesperson was a bit less than elegant in telling any residents still inside the 1.5-mile evacuation zone they should stay inside, keep windows and doors closed, and not run their air conditioning:

"You shouldn't be here, but if you haven't left, shelter in place," Arkema spokesman Jeff Carr said. "That's our advice."

Harris County Sheriff Ed Gonzales seemed almost excessively concerned in making it absolutely clear that there were no explosions, just some popping sounds from the chemical reactions that unsophisticated rubes might think were explosions, but were definitely not explosions, nosiree:

"I want to be clear, it was not an explosion," Harris County sheriff says of chemical plant incident in Crosby, TX https://t.co/tmufk7LYnn pic.twitter.com/gEFSnyCCm7

Honestly, everything is under control. Situation normal. Had a slight refrigeration malfunction and a chemical reaction. But, uh, everything's perfectly all right now. We're fine. We're all fine here, now, thank you. How are you?

Bob Royall of the Harris County Fire Marshal’s Office explained to reporters they shouldn't get all het up over terminology, even if Arkema was saying "explosions":

“I don’t want the public thinking these are massive explosions,” Royall told reporters. Attempting to explain why the plant operator called them explosions while local authorities did not, Royall said: “We’re on the same page. It’s a matter of terminology. I call it a chemical reaction and an overpressure of the container.”

Seriously, just relax. It was a chemical reaction and an overpressure, which is SO TOTALLY NOT an "explosion." Royall just doesn't want irresponsible journalists to blow this up into something it's not.

A fire marshal's spokesperson, Rachel Moreno, told the Houston Chronicle details about what's there, how it's stored, and what officials are planning to do about it:

Three of the vans lost refrigeration by Wednesday morning. Six of them had not, Moreno said.

The explosions started about 1 a.m., causing flames and 40 feet of gray smoke that later turned black.

The company said it had agreed with local authorities that, because of the volatile chemicals involved, "the best course of action is to let the fire burn itself out."

The sheriff's office twitter account said one deputy was taken to the hospital after inhaling fumes, and another nine "drove themselves to hospital as precaution." Later in the morning the department tweeted that eight of a total of 15 deputies at the hospital had been released, while 7 others were still being evaluated, and that Arkema had informed the department the fumes were not toxic. So that's reassuring! Just don't open your windows or run your AC if you're downwind.

Would you believe that, in this age of skepticism and distrust, some people in the area weren't altogether reassured? Says the Chronicle:

[At] least one family not far outside the 1.5-mile zone was left worried.

"But homes two miles away are safe?" questioned Alicia Garcia, who had recently returned to the family's home about four miles away after evacuating Sunday because of flooding.

Officially, yes. Unofficially, we'd go visit friends in Austin, maybe. And it's not like Arkema is going out of its way to be too transparent about what particular compounds within the exciting family of organic peroxides are inside those refrigerated vans or elsewhere on plant grounds. During a presser Wednesday, Arkema CEO Rich Rowe said that because of the flooding and the danger of the chemicals warming, "There is no way to prevent an explosion or fire," and he turned out to be right; of more concern, Rowe "refused to release the company's federally mandated risk management plan or its chemical inventory to reporters," according to the Chronicle.

The "Rachel Maddow Show" reported Wednesday night that when Houston Chronicle reporter Matt Dempsey asked Rowe if he'd release the chemical inventory, Rowe didn't see why he'd want to do that (since MSNBC embeddable videos don't play nice with Wonkette's fancy https secure site, here's a screenshot of the transcript; it's at about 10:19 in the video):

It's like Three Mile Island, but with 'organic peroxides.' Not the good safe hippie kind of 'organic,' either.

Maddow then went on to remind us that Texas state government changed the law on disclosing such chemical inventories -- they used to be public records, but after the devastating 2013 explosion of a fertilizer plant in West, Texas, companies no longer have to disclose the records. In 2014, Greg Abbott, then campaigning for governor, explained it was no big, since if anyone wanted to know what chemicals were stored at a chemical plant, they could just drive right up and ask:

Oh. And then the chemical companies can say NO, end of story. Take their word for it -- it's all perfectly safe. Why on earth would a Texas chemical plant not want to tell the complete truth?

Yr Wonkette is supported by reader donations. Please take a nice hit of O2 from your personal breathing apparatus and click the "Donate" clicky.