Chicago Cop Bummed He Had To Shoot Those Black People, Sues Survivors 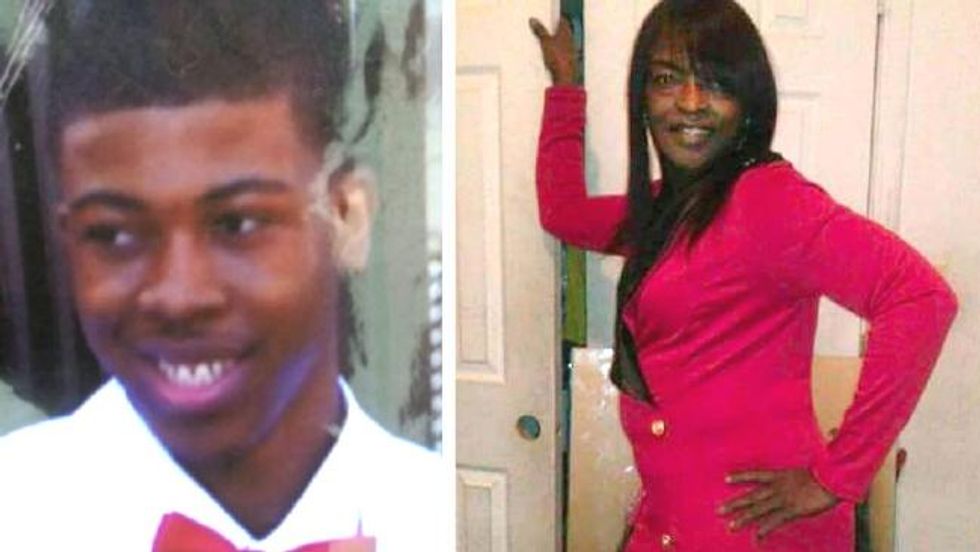 In a move that's certain to help improve relations between police and the populations they keep safe, a Chicago cop is suing the estate of Quintonio LaGrier, the 19-year-old he shot to death, along with an innocent bystander, at the young man's home on the day after Christmas. That ought to be a warning to people not to make the police kill them.

In the early hours of December 26, 2015, officer Robert Rialmo responded to a call about a domestic disturbance. Quintonio, a Northern Illinois University student who had reportedly been acting "erratically in the months leading up to the shooting," called 911 three times, claiming that someone was threatening his life. but giving no details. While police were on the way, his father also called 911 to say that Quintonio had tried to break into his bedroom with a baseball bat, and asked police to help his son, whom he later said "had some emotional problems." Rialmo shot the teen just outside the home; one bullet went through Quintonio's arm and struck the family's downstairs renter, Bettie Jones, in the chest, killing her. Jones's death has been described as an accident by police.

Four days after the shooting, Antonio LeGrier filed a wrongful-death lawsuit against the City of Chicago, accusing 911 dispatchers of rudely dismissing Quintonio's calls for help (when he didn't answer the first dispatcher's questions, she hung up on him), and accusing Rialmo of acting recklessly. Friday, Rialmo filed a countersuit against the teen's estate, claiming that all the unpleasantness of having to shoot and kill two people had left him badly traumatized.

The lawsuits present very different narratives of what happened. LeGrier's suit says Quintonio was shot from a distance of 20 or 30 feet away, while Rialmo's countersuit says when the teen was about four feet away from him, Quintonio "took a full swing at Officer Rialmo's head, missing it by inches," after which Rialmo backed away with his gun still holstered as Quintonio swung the bat again. According to Officer Rialmo, he shot the teenager as he prepared to swing at him a third time, from a distance of 3 or 4 feet.

LeGrier's attorney, Basileios Foutris, disputes Rialmo's account, arguing that it made no sense for Quintonio to have attacked a police officer after having called 911 three times:

"If you're calling multiple times for help are you going to charge a police officer and try to hit him with a bat? That's ridiculous," Foutris said.

(Just to cover all the Rashomon bases here, we should note that the LeGrier family's lawsuit alleges Quintonio became increasingly frustrated and angry after being dismissed by 911 operators. So yes, lawyers do argue in multiple directions.) Foutris also called the countersuit "a new low even for the Chicago Police Department ... First you shoot them, then you sue them."

Bettie Jones's family has also filed a lawsuit against the city, which claims Rialmo indiscriminately fired a "hail of bullets" at Quintonio LeGrier and in the general direction of Ms. Jones. LeGrier's body was hit by six bullets, according to an autopsy.

Yr Wonkette is neither an attorney nor a medical examiner, but we're reasonably certain forensic evidence should indicate fairly clearly whether all those bullets went into Quintonio LeGrier from a distance of four feet or twenty. But maybe we've seen too many movies? If the evidence really does show that LeGrier was shot at extremely close range, we'd be willing to buy Rialmo's version of events, although his lawsuit for $10 million (presumably to come from any potential settlement with the city, unless a family who had to take in a renter had a secret stash of millions) still sounds over the top:

We get it: Shooting people to death is haaaard. In addition, an attorney for Rialmo, Joel Brodsky, explained that if only people didn't have domestic disturbances, cops wouldn't have to sue them after killing them:

"Facts are a stubborn thing," Brodsky said, quoting U.S. founding father John Adams. "This whole horrible event was the result of Quintonio LeGrier trying to take my client's head off with an aluminum baseball bat."

The AP reports that lawsuits like Rialmo's are "extraordinarily unusual," according to former federal prosecutor Phil Turner, now a defense attorney who isn't involved in the case:

He questioned whether a judge would give it any merit and said it appeared intended to intimidate LeGrier's family. He said he had never heard of an officer blaming his shooting victim for causing trauma.

"That is a known part of the job," Turner said of policing's emotional toll.