Chicago Tribune: Let Gays Eat Those Swastika Cakes We Like 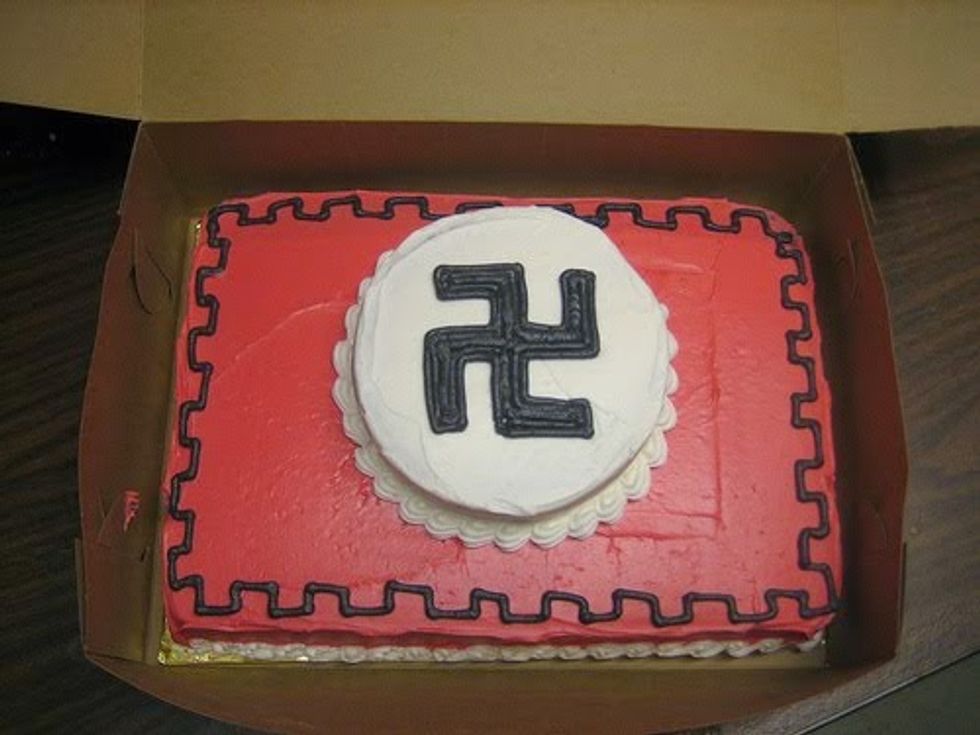 Who is being a stupid asshole today? It is the editorial board of the Chicago Tribune! Happy to get in on the "hot takes from last decade" trend our Robyn chronicled so ably yesterday, the ed board apparently sat in a circle, sniffed their own wind, and then chose the sphincter that was most noxious among them to expel "thoughts" on Masterpiece Cakeshop v. Colorado Civil Rights Commission, the gay wedding cake case currently before the Supreme Court.

To be forced to create a cake for a same-sex wedding is a similar burden [to a New Hampshire resident having to display "Live Free or Die" on his license plate, so we're already deep into WTF]. Imagine a Jewish baker being required to put a swastika on a cake. In other contexts, the state of Colorado is more understanding: It sided with bakers who refused to provide cakes with messages disparaging same-sex marriage. So while Colorado is content to exempt some bakers from compelled speech, it wants ["Christian" baker Jack] Phillips compelled to create an opposite message.

First up: Fuck you.

Third with a snap in Z formation: "Nazi" is not a protected class for public accommodation under the law, but we'll be sure to let you know should that change. The affianced couple were asking for the same cake the baker, Jack Phillips, would create for anyone else, and he refused to provide it before even asking whether there'd be a big ol' gay cock topper. If those Jewish bakers were regularly creating swastika cakes, but wouldn't sell that same cake to a Nazi, the Nazi miiiight have a case! Except he still wouldn't, because "Nazi" is not an immutable characteristic, like "gay" is, unless you count those "ex-gay" guys "married" to "ex-lesbians."

Fourth: Really, just fuck you again, that was disgusting. Was the Chicago Tribune done being stupid and shitty? Nah dude.

The lawyers for the couple claimed that allowing the bakery to refuse them would be akin to letting a business bar black customers. But race has an exceptional status in anti-discrimination law, supported by constitutional amendments. And the places once closed to blacks — restaurants, motels, bathrooms — served more urgent needs than those at stake here. Blacks traveling in the South during the Jim Crow era might be unable to find any place to attend to basic bodily functions. A lawyer for Phillips argued that if a merchant refuses service to a black person, the merchant’s objection clearly is to the person, not to expressing a message.

So we guess if a bakery -- instead of a restaurant, motel, or bathroom -- wants to refuse service to black people, under the Tribune's formulation, that's fine! The Civil Rights Act disagrees. Also, word word word "the merchant's objection is to the person, not the message." Fine, let's make them an interracial couple instead of a black guy, Tribune. Many "religions" would refuse to endorse that "message," for which they have very ugly words and sometimes murder. Do they have to accept a cake order once they find out the groom is an urban? Why or why not? (Please answer in haiku or interpretive dance.)

Gay couples in Colorado have far more options for their wedding confections. [David] Mullins and [Charlie] Craig could have easily gotten what they wanted without forcing a baker to swallow his objections.

Oh, haha, what a clever reference to the gay couple trying to force the poor baker to swallow their homosexual loads. Don't let anyone ram nothin' down your throats, Chicago Tribune editorial board. Shove it up your asses instead!