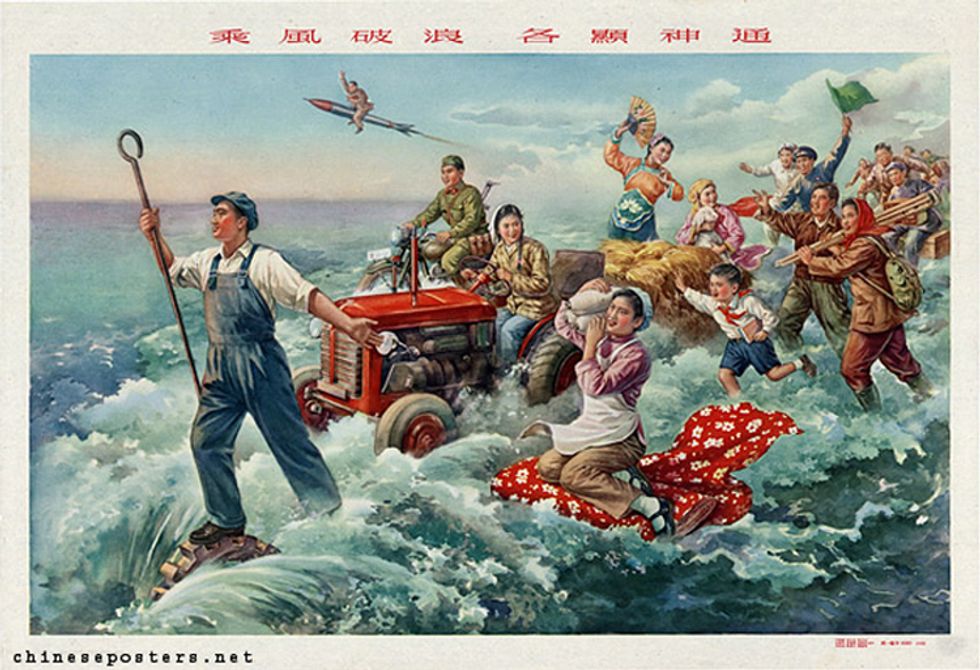 China's amphibious motorcycles and tractors to be 60% cleaner by 2022. Free LSD For artists will continue as is

While not nearly as sexy (?) as the news that John Boehner will be dragging his orange ass back to Ohio (or more likely, to a nice lobbying firm where he can make lots of money to feed the wind-up monkey on his back), there's some way more important news out of Washington, at least for the long term: Chinese President Xi Jinping announced that China is adopting a cap-and-trade program to limit emissions of greenhouse gases, which is HUGE news in the fight against climate change. The move also eliminates one of climate change deniers' favorite arguments against the U.S. taking any action: Why should we reduce our CO2 output when China's building all those coal power plants and won't do anything about climate change? Not that we doubt Republicans' creativity in finding other reasons to ignore the issue, like maybe throwing TWO snowballs, but it's still a good thing.

The Chinese cap-and-trade program is a follow-up to the agreement reached last November when Barack Obama traveled to China to do some Star Trek cosplay and figure out what the world's two biggest producers of carbon pollution could do to keep the planet from overheating. Ironically enough, the Chinese plan is largely based on the market-based initiative that Obama tried to get Congress to pass back in his first term, which the Senate killed because senators from coal states argued that China would never agree to similar reductions. And maybe because Sen. Joe Manchin (D-But From West Virginia) shot it.

China's action isn't being taken solely out of its desire to stand on a hilltop with a Coca-Cola and sing about sunshine and rainbows, of course. As the New York Times points out:

Domestic and external pressures have driven the Chinese government to take firmer action to curb emissions from fossil fuels, especially coal. Growing public anger about the noxious air that often envelops Beijing and many other Chinese cities has prompted the government to introduce restrictions on coal and other sources of smog, with the side benefit of reducing carbon dioxide pollution. The authorities also see economic benefits in reducing fossil fuel use.

In addition to developing a carbon market scheme, China will offer companies incentives to move toward greener power generation, provide economic aid to developing countries to help them transition from fossil fuels, and to place limits on public spending for public works that pollute. That last initiative borrows from an American plan that did work, a 2013 Treasury Department policy to stop public financing of new coal-fired power plants. China has also been meeting with California environmental officials to see how that state's cap-and-trade program works.

In August, the Obama administration announced new carbon limits for power plants, which Republicans mocked because the Chinese would never take similar action, so why should we Hurt Jobs when China is a lot worse? Well, guess what? According to the Times story, "international negotiators say Mr. Obama’s regulations have helped break a long deadlock between the United States and China on climate change." Funny how that worked out. Now, of course, the argument will switch from "they'll never agree to do anything" to "they're going to cheat!!!" Not that western capitalists would ever sink so low as to try to game emissions controls.

So let's all take a moment to pause and reflect on this weird moment for the planet: The leaders of China and the United States agree with the pope of Rome that it's possible to stop global warming, and virtually all the Republican candidates for president insist that even "if" science is real, there's nothing we can do about it because it would be bad for profits.

[NYT / Image: "Brave the wind and the waves, everything has remarkable abilities" ChinesePosters.net]