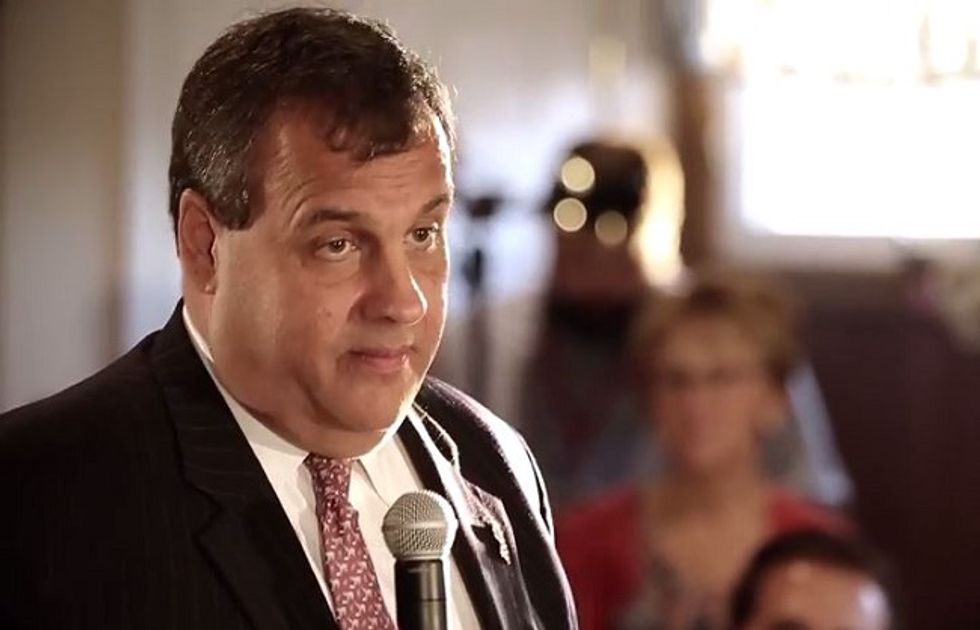 Having burned all his bridges in New Jersey – those he didn’t shut down, anyway – Gov. Chris Christie today announced his escape plan: to run for the GOP nomination for president in 2016. There are so many reasons why Christie is likely undertaking this utterly doomed effort: ego, pride, galactically outsized ambition, the fact that everyone in his state hates him so much he might as well spend even less time there than he already does. Yr Wonkette couldn’t make it to this announcement in person like last time, but we could commandeer the TV in our brother’s living room to watch and write a live-blog.

10:15 A.M. – While we’re running our nephews over to their mom’s workplace so we can come back and watch this shitfuffle in peace, we’ll leave you with some background material. Here is the announcement video Christie released Sunday night that makes him look like an old Catskills comedian now earning a living playing nursing homes. Here is an article about a recent Farleigh Dickinson University poll showing him with an approval rating in New Jersey of 30 percent, lower than the approvals of former Governor Jon Corzine at the time that Christie thumped him in the 2009 election. Here is a video of a monkey masturbating, which pretty much sums up what the entire political press will look like for the next 17 months.

11:00 A.M. – Christie is making his big announcement at his alma mater, Livingston High School in Livingston, where the big lug began his political career by serving as class president for three years. Definitely not in attendance? The school district superintendent, who announced he would boycott the speech as a protest of Christie treating the schools and the teachers’ unions like the toilet of an Atlantic City casino after he tore through the complimentary buffet.

Also likely not in attendance: Christie’s Livingston H.S. buddy and former consigliere David Wildstein, who is busy these days meeting with his lawyers after taking a plea deal in federal court over his role in the Bridgegate scandal. If Christie’s campaign ends with him being indicted on corruption charges, it will most likely be because Wildstein sang like a canary in exchange for a reduced prison sentence.

The best part? Christie is only one of the Republican governors running for president who could be undone by criminal charges before the primary voters start hitting the polls. (Bobby Jindal remains too dumb to so much as successfully tear the tag off a mattress.) Democracy!

Meanwhile, Hillary Clinton forgot to turn over to Benghazi Investigation Czar Rep. Trey Gowdy some emails telling Bill she’d be home late because she wanted to hit a yoga class. BOTH SIDES!!!111!

11:10 A.M. – We missed the name of the person introducing Christie because it’s on a split screen with the MSNBC panel, where Tamron Hall is showing a montage of times the big lug has told people to sit down and shut up. Expect to see this montage approximately 7,456,854,387 times if Christie gets any traction in this race.

11:15 A.M. – Per Politico, Christie is not using a teleprompter today so as to showcase his slogan that he’s “telling it like it is.” And also because you just know that speaking extemporaneously will be a skill the candidates will bludgeon voters over the head with after eight years of the Kenyan Usurper reading off a teleprompter like a common moron. Expect to see a Christie campaign ad built around this exceptional skill sometime soon.

11:18 A.M. – And here’s Christie, along with his four kids and his wife wearing a dress in a bright enough shade of yellow to make us check the color balance on our TV.

One of the women holding a sign behind the stage keeps blinking in an exaggerated manner, like a hostage in a video signaling S.O.S with her eyes. Which for all we know is exactly what’s happening.

11:27 A.M. – He’s bragging about his record getting New Jersey budgets under control (using the smoke and mirrors tricks that all governors use to balance their state budgets, which is often a constitutional requirement). There were hard choices! Chris Christie made them! Now most everyone in New Jersey hates him! Vote Christie, he wants to be hated by all of America!

11:30 A.M. – The blinking lady is gone, whisked back to the dungeon under the governor’s mansion, presumably.

11:35 A.M. – Ripping on both parties for refusing to “compromise.” Hey, remember when President Obama used to talk about compromise and the members of Christie’s party told him to fuck off again and again and again? Sure we’re liberal homers, but we don’t think this is a “both sides!” issue. There is one side that tried to be reasonable and one side full of people whose brains were long ago eaten by space lizards.

Christie says the American people are not angry, so he’ll yell at them until they get angry.

11:42 A.M. – LOL, not using a teleprompter but there is a little music stand that he keeps reading off of. So off the cuff!

11:45 A.M. – Hitting Obama on his “weak and feckless” foreign policy and leadership in the world. Vote for Christie, who will yell at our allies until they do what we want them to do. America will be Respected again! Yes, we meant to capitalize that.

Give Christie this: He works hard to sound passionate. He just feels so … small. To us he sounds like an alderman yelling at his constituents to let the big developer build the mall on the land where they want a park. He’s a small-timer whose ambitions are so far ahead of his qualifications, he’s about to start lapping them.

11:49 A.M. – “A campaign that every day will not worry about what is popular but what is right, because what is right will fix America, not what’s popular.” Is he quoting Tanya Donelly lyrics?

11:56 P.M. – And it’s over! Christie will immediately decamp for New Hampshire to campaign for several days. We haven’t seen a New Jersey resident flee to New Hampshire that fast since Vito Spatafore also left home ahead of a scandal that dropped his approval rating to zero. And he was an earner! Whereas Christie’s entire economic record as governor is a video of him yelling at public-sector unions while his state’s credit rating swirls down the shitter.

Welcome to 2016, Governor. We thank you in advance for the laughter.