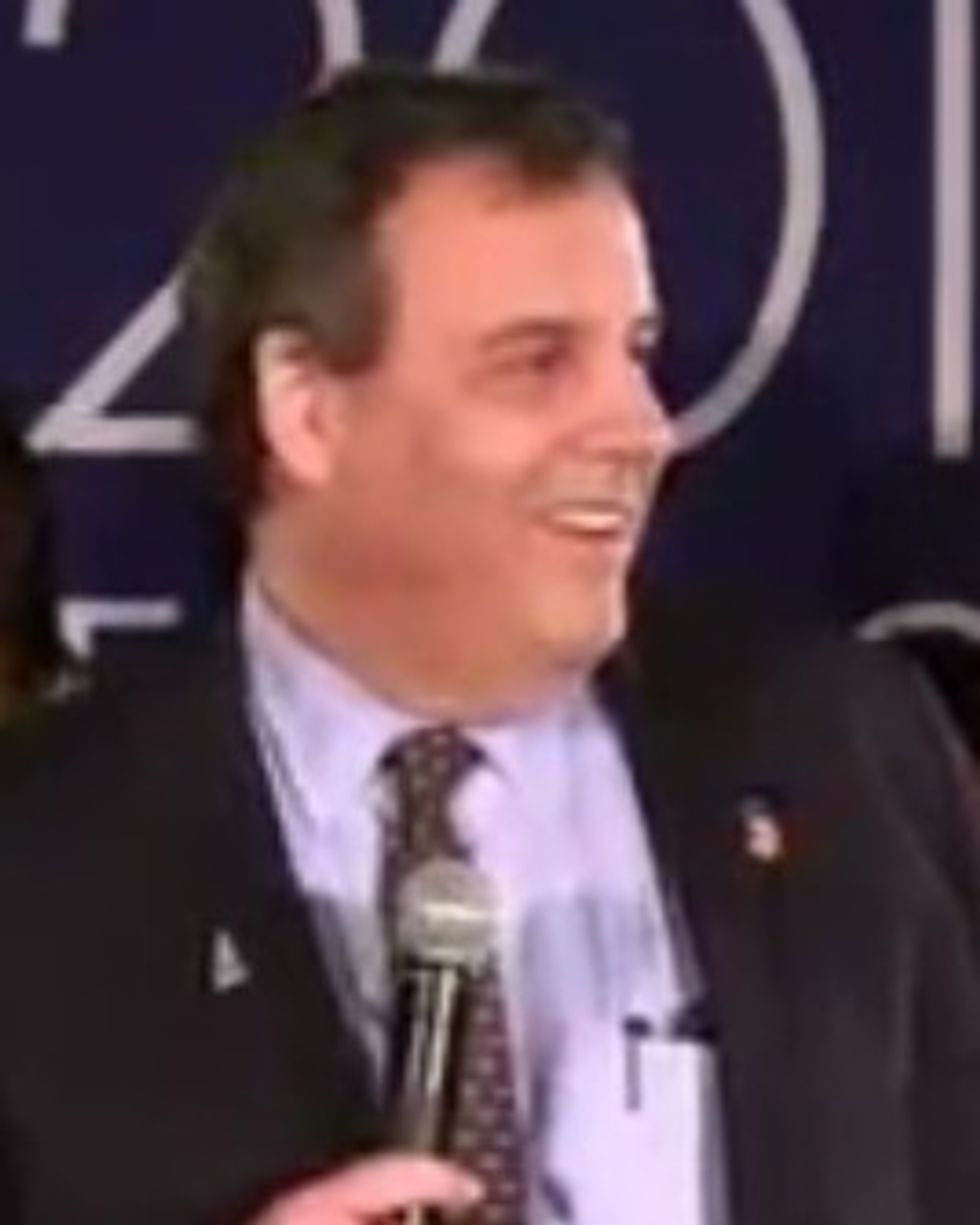 So please remember to keep this family in your prayers...Hi, Jennifer!

[contextly_sidebar id="pVKa4EYabfxR3cMOIN1IgnzODIuJxc9G"]Chris Christie took a moment from his busy campaign schedule to pretend he gave a damn about the ginormous snowstorm that hit the East Coast over the weekend. He left New Hampshire for a whole three days, almost, to act like he had a state to govern during a weather emergency, which is, of course, what he's best at. And then he skedaddled straight back to campaigning in New Hampshire as soon as the last few flakes settled. For chrissakes, it's not like he's running for president of New Jersey, now is it?

But as our friend Tommy Christopher over at Mediaite points out, Chris Christie is not made of stone. On Monday, during a town hall in Hooksett, New Hampshire, he offered a touching memorial to a dumb New Jersey mom and child who let themselves go and get killed by carbon monoxide, because they were fools:

A young mother and her one year-old child who were in their car and did not clear the snow away from their tailpipe and died of carbon monoxide poisoning, and her 3 year-old child was also in the car, is in critical condition, so I hope that tonight, you’ll keep that family in your prayers, 'cause that is a tragic loss of life. But that’s what happens in some of these storms, people don’t know where to go or exactly what to do, and you try to tell them stay in your home…

God, you try to tell people to stay home and be safe, and they go and let themselves get carbon monoxide poisoning. Whatcha gonna do, right? But yeah, it's all tragic and stuff I guess, so please pray for them, and notice his serious long face here, because Chris Christie cares. Just as long as you don't get in his way like the 76-year-old state senator he wanted to beat with a baseball bat.

But then, like a doggie seeing another doggie in a passing car, Christie's face suddenly brightened as he saw someone far more interesting than some stupid disposable poor people who can't vote in Hew Hampshire anyway:

Spotting local GOP chair Jennifer Horn, Christie instantly went into full schmooze mode, all thought of the silly dead people wiped away by the need to make sure a VIP gets a good seat for the performance:

Jennifer! Come on up here! We’ve got seats up here for you, you’re the chairman of the Republican Party in New Hampshire! [applause]

We got special seats for you up here! We don’t let the chairman of the New Hampshire Republican Party stand in the back if she doesn’t have to! Thank you for coming, Jennifer!

And then, as if he hadn't just been joking about the absurdity of the chairman of the New Hampshire Republican Party having to remain standing, Christie was instantly back to Somber Mode:

Um...but, you never know in these storms, you know, you have to be smart about this. You know, I continue to tell people to stay in their homes, and don’t go out in your car, and sometimes people just have to, and feel like they have to, and some tragedy ensues. So they're certainly in my prayers and I hope they'll be in your prayers, too.

[contextly_sidebar id="GYUZtJHSZ90sGtFEFr7b4VRdEbKqJBfQ"]That was awfully nice of Christie to remember he was busy being "concerned" about the tragic deaths of those dummies who couldn't follow simple instructions, so they went and died. Truly a shame. Most of the people who fail to listen to Chris Christie merely get their traffic snarled.

[contextly_sidebar id="vGWFHTH9wUSg88tykluILDTwiNZuPmld"]As if that weren't enough tone deafness for a single town hall, Christie then went on to engage in his favorite hobby, yelling at young women who ask him questions. This time it was a young woman who was obviously lying about the storm damage she'd been hearing about. After warmly congratulating her on her choice to go to school in Pennington, New Jersey, Christie turned sour when she asked the sort of question that only a planted opposition researcher or some other troublemaker would ask: "Why are you here in New Hampshire campaigning instead of there, helping to survey the damages done by the coastal flooding from the storm?"

Christie wasn't having any of her Gotcha Question nonsense:

Young Woman: All over the state -- of flooding...

That's the kind of toughness we need in a president. Just as he won't be bullied by some clearly dishonest, lying girl who probably doesn't even go to school in Pennington, where they have an honor code that clearly says you shouldn't lie about having friends and family "all over the state," Chris Christie will not take any shit from Vladimir Putin or the Iranians, either.

Besides, Christie added, there's not a hell of a lot one governor can do, stupid girl:

I’m the governor. I’m not the chief engineer. I run a government of 60,000 people. They know exactly what they need to do. I was on the phone with them six different times today to check on what’s going on [...]

By the way, you know what the National Weather Service called the flooding? "Moderate." Except you’re watching CNN and they’ve got nothing else to show. Because plowing snow is pretty boring. So when you see water flowing in with little icebergs on them, you say, "Oh, look at that."

[contextly_sidebar id="grPErpbhzu2NN2DYsEcNKuO4VwKroBmK"]Look, you do not question Chris Christie about his qualifications as the Disaster Governor. Just sit down and shut up, will you? Because Chris Christie personally rebuilt New Jersey after Hurricane Sandy, except in the parts where mayors didn't endorse him, maybe.

Honestly, it's about time you people had some goddamned decorum and prayed for the real victims, such as Chris Christie's electoral prospects.