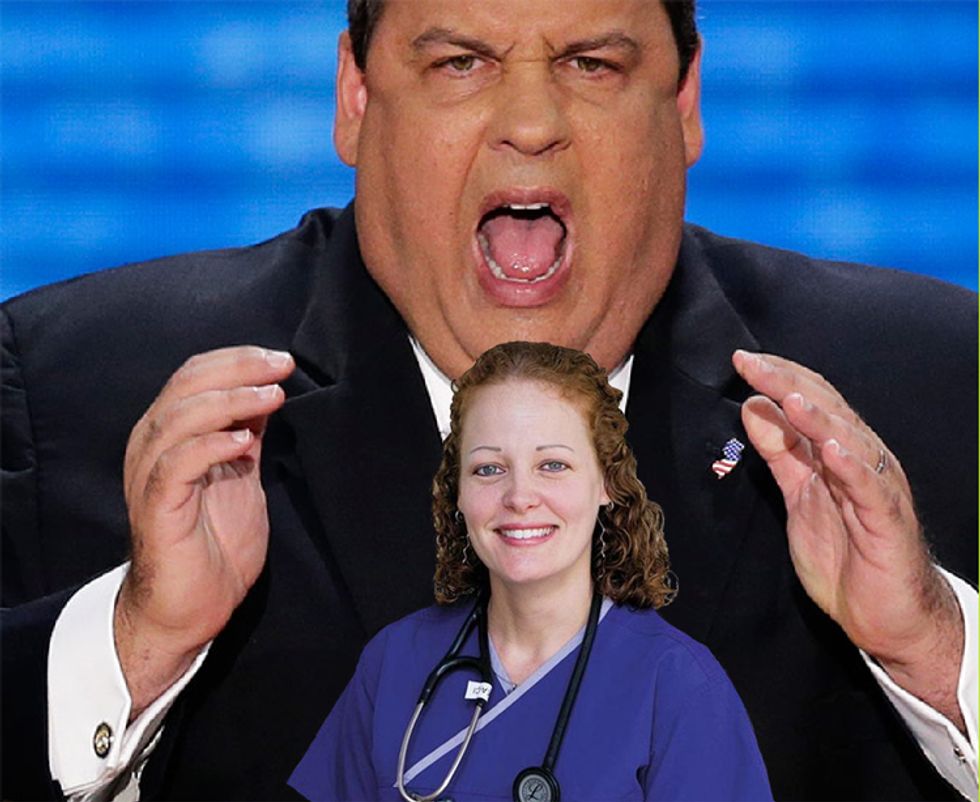 New Jersey Gov. Chris Christie said Monday that public health policy needs to find a "balance" between the need to protect the public and parents who don't know shit about science. This comes less than four months after Christie slapped a completely healthy nurse into a quarantine tent because she'd been treating Ebola patients.

But there are some very good reasons for the different approaches to nurse Kaci Hickox and parents whose kids are at risk for measles and other deadly diseases. For one thing, nobody's made any horror movies about measles, which is far more infectious than Ebola but is not from Africa, and also there's no election coming up next month.

While visiting an American pharmaceutical company in London that manufactures a flu vaccine, Christie was asked about parents who refuse to immunize their children against measles and other potentially deadly diseases. The New York Timesreports that he "stopped short of recommending that parents immunize their children against measles, or any other illness, calling for 'balance' and 'choice.'" He noted that he and his wife had in fact vaccinated all four of their kids, but explained that what really matters is the freedom to choose whether to protect your kids and the community from a disease that should have been eradicated decades ago, or to believe in unscientific paranoia you read on the internet:

Mr. Christie said that “not every vaccine is created equal, and not every disease type is as great a public health threat as others.”

For instance, protecting against measles -- an airborne virus that the Centers for Disease Control and Prevention warns can be transmitted by coughing or sneezing and can remain infectious in the air for up to two hours -- is apparently something that people should have a lot of personal choice about, for freedom.

On the other hand, when Kaci Hickox returned from Africa after treating Ebola patients, Christie ordered her confined for 21 days in a tent in an unheated wing of a hospital in Newark, even though she had no symptoms and tested negative for Ebola, twice.

At the time, Christie insisted that Hickox was "obviously ill" and had to be confined for the safety of the public, even though Ebola is only transmitted by direct contact with bodily fluids from patients who have symptoms, or by contact with items that have been contaminated with the virus, which cannot be spread through the air.

In contrast to Christie's laissez-get-sick call for "balance," President Obama said in an NBC interview, "There is every reason to get vaccinated -- there aren’t reasons to not," and he called on all parents to get their kids vaccinated, adding that "the science is pretty undisputable." In a remarkable show of restraint, the president managed to refrain from adding "for fuck's sake."

“I just want people to know the facts and science and the information,” the president said. “And the fact is that a major success of our civilization is our ability to prevent disease that in the past have devastated folks. And measles is preventable.”

In addition, CDC Director Tom Frieden emphasized on ABC News's This Week that measles is "a serious disease, and it would be terrible if we had preventable illness and even death from this disease that’s preventable from a safe vaccine." He added that parents who don't vaccinate risk not only their own kids' health, but also the health of those who can't be vaccinated, such as infants and people with immune deficiencies:

If many kids aren’t vaccinated, then kids who can’t be vaccinated -- those who have immune problems -- are at real risk of getting severely ill from measles. What do you do to your own kids doesn’t just affect your family, it affects other families as well.

Obviously, that sounds an awful lot like socialism, and now Barack Obama has gone and made measles a partisan issue by disagreeing with Chris Christie. Get ready: The same people who were screaming that Obama was trying to kill us with Ebola are almost guaranteed to call on people to be skeptical of what Big Government tries to tell Americans about the need to vaccinate. Our money's on Fox's Keith Ablow, but it could be any of the usual crew. The only real question is how they'll connect the current measles outbreaks to Benghazi.