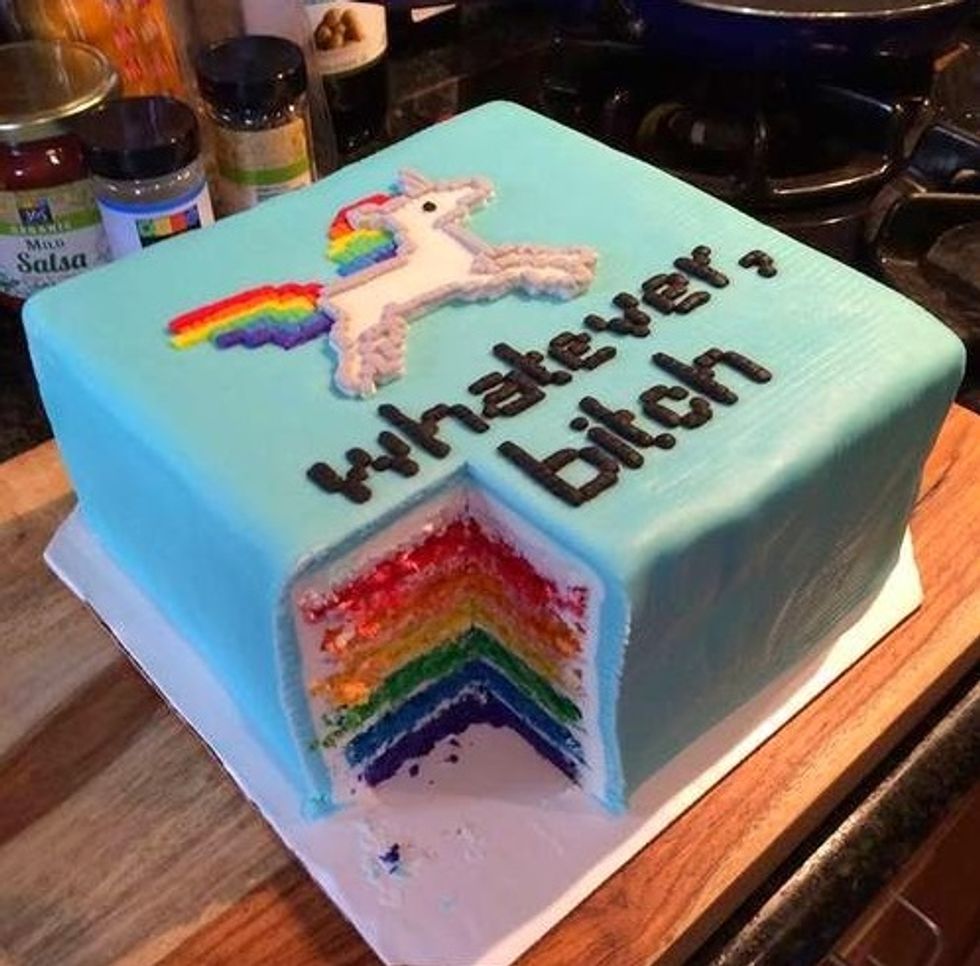 Not the actual cake that was ordered.

An Ohio baker has done her level best to expand the boundaries of the National Dumbfuckery on Religious Freedom, insisting that her Christian faith prevents her from baking a cake for a lesbian couple. Not a wedding cake: a fucking birthday cake.

It certainly wasn't the text message Candice Lowe was expecting to get on her honeymoon. She says it came from the owner of a local bakery, canceling the order for her wife's birthday cake. Lowe says, "after she saw my Facebook page, she found out that I was in a same-sex marriage and she could not do my cake." ... The couple was just married two weeks ago and are still on cloud nine after celebrating with their son, family and friends. But that all came crashing down. In some ways, they say, it's like taking two steps back. "It wasn't a wedding cake, it was just a birthday cake [for my wife, Amanda]," Candice said. "A birthday cake has nothing to do with your sexual preference."

Pardon us for a moment.

According to the blog Peacock Panache, Ms. Lowe didn't say anything about her sexual orientation when she ordered the cake, but then the baker looked her up on Facebook, which is apparently a necessary part of baking a goddamn birthday cake for some people. Oh dear, and there was a very happy photo of the newlyweds:

Obviously, the baker had to send an apologetic text, in the cutest most whimsical font possible, to let Lowe know Jesus wouldn't allow her to bake cakes for demon lesbianese people:

Update: New photo has removed baker's name. Also, as a couple commenters have noted, that smiley face at the end makes the whole "Can't serve you since you're hellbound!" message much nicer. To be fair, did you really want a baker who can't spell your/you're anyway?

Ms. Lowe posted the screenshot to her Facebook with the single comment "Just instantly pissed me the fuck off" plus five frowny faces, and things quickly went viral, as they do.

Contacted by the TV station that broke the story, the Good Christian owner of Take the Cake initially "expressed interest in sharing her side of the story," but then stopped returning their calls, and has not responded to any media inquiries. Clearly, she needs some time to deal with all the oppression she faces (NO, DO NOT DOX HER), and because her name has been mentioned in some stories, doubtless some assholes have threatened her, which is NEVER OK. It's perfectly sufficient for the internet to ask her to consider why on earth she thought it was her business to take to social media to check the relationship status of her customers in the first place.

Don't worry, we're certain a GoFundMe will be set up to help the poor bigot sooner or later. Will give the last word to Friend Of Wonkette Dan Savage, who explained where exactly this leaves us in the Culture War as of July 7, 2016:

Christ on a crutch. At least one good thing came out of this, besides the shaming of a bigot. We also learned from the Lowes' Facebook cover photo that everyone in their wedding party was secretly a superhero (except maybe Amanda, though for all we know she had something appropriately spandexy under her gown):

No love for Madman? Fine.

We wish the happy couple a long nerdy life together, and all of those cakes we like.

[13ABC via The Stranger / Peacock Panache]