Christian Figures Out Why Women Get Sexually Harassed. Surprise, It Is Abortion! 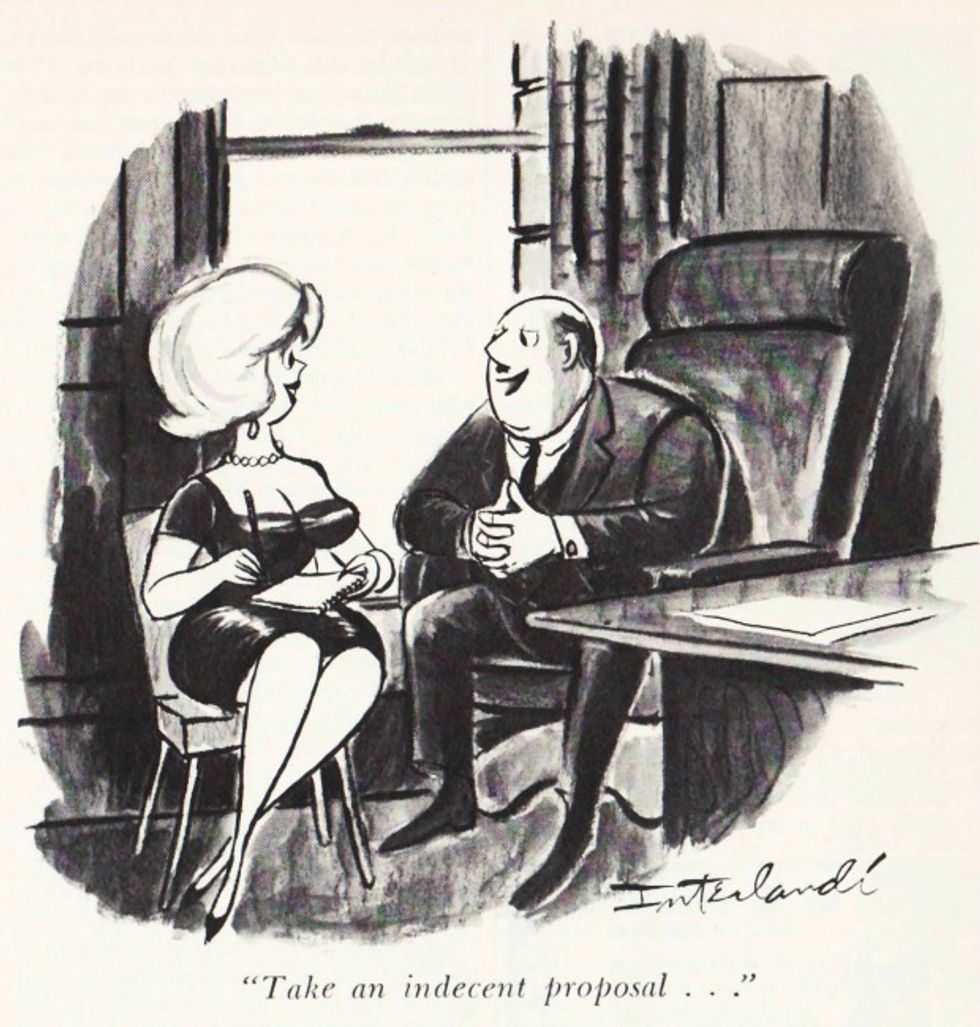 You know what wasn't legal when this cartoon was made?

Lo these past few months, women across the nation have come forward with harrowing stories of sexual harassment and sexual assault. Surely, we can all agree that this is very good and very necessary. But why was this all happening in the first place? Why is it that men felt so entitled to women's bodies? Why is it that these men believed there would never be any consequences to their actions?

If you are a normal person, you might assume it is because we live in a society that is still very sexist. If you are "internationally known author, interpreter of culture and activist/theologian" Dr. Joseph Mattera, however, you may have come to an altogether surprising conclusion.

In a recent article for the Christian website Charisma News, Dr. Mattera explains that the real reason all those women were getting sexually harassed is actually because abortion is legal. Yes, the only way to get men to stop thinking they are entitled to do things to women without their permission is to force women to have babies against their will. Makes all kinds of sense!

Dr. Mattera's theory is that men sexually harass and abuse women because they have no respect for human life, because abortion.

Having less cultural regard for the rights of the most vulnerable in society (a human baby) can easily result in projecting less value to all other humans. Hence, the equation goes like this: A culture with less regard for innocent unborn babies can equal less regard for all other humans (Resulting in more post birth racism, crime, murder, rape and sexual harassment). Hence, this eroding of societal mores makes it easier for people to objectify one another for their own ends (like a mother terminating her pregnancy for economic reasons or to avoid embarrassment).

What a poignant observation! Whoever even heard of "racism, crime, murder, rape and sexual harassment" before abortion was legalized in 1973, except for literally every person who was alive before 1973?

You may now be wondering "But what about all those people who really hate abortion, but who have also sexually harassed and abused women? Bill O'Reilly, for instance! An astounding array of church leaders from nearly every possibly denomination! Roy Moore!" Dr. Mattera admits that it does happen, but that it is less likely to, because doing so would violate their core belief system.

Does this mean that a pro-life individual will never sexually harass or abuse another individual? Of course no—since all humans are born in sin, we are all guilty of living duplicitous lives and compartmentalizing truth—however, a pro-life person who sexually harasses another person is clearly going against their core belief system, which can make it harder for them to act on their deviant sexual impulse.

It's the pro-choice ones you have to watch out for:

Conversely, pro-choice people lack the moral foundation in their worldview necessary to protect the innocent—which can possibly result in making it easier in their conscious to objectify and mistreat (post-birth) human beings.

Dr. Mattera, notably, does not point to any particular study that has been done. There is absolutely no data to prove that pro-choice men sexually harass or abuse women at rates higher than pro-life men. He just imagines that this is the case, just as he imagines that pro-choice people lack a moral foundation simply because they prioritize protecting the lives of already living women (whom, I gather, he does not consider "innocent") over that of a fetus.

In conclusion, I believe that the current conversation regarding sexual harassment and abuse should also lead us to further dig down and re-examine the abortion debate—because the two are inexplicably connected.

Wonkette is fully funded by stunningly attractive and kind readers like you! Click here to leave us a tip!