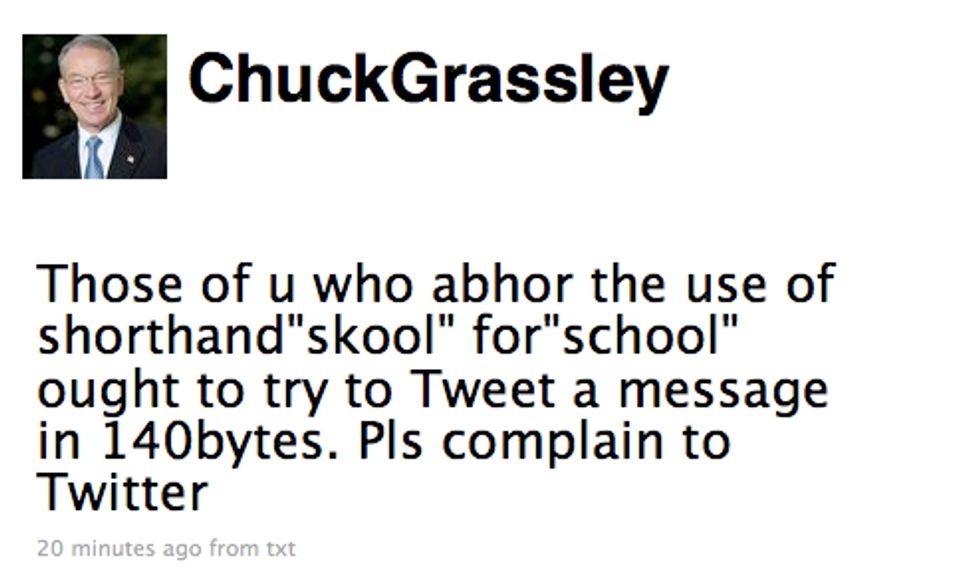 We all know what happens when Chuck Grassley isn't sleeping or unconscious: He uploads, uh, "bytes" to his Twitter Page. Mrs. Barbara Grassley has had enough. But every time she asks her husband politely, "Don't you think you've done enough of that Twitter stuff for one day? Also, what does'doRITE' even mean?" he just freaks out and screams "I'm no NAIL!" which is true but hardly the point. This went on for years, until Barbara caught Chuck "tweeting" like a dumbass during church, and that's when she realized it was time to tell an Iowa newspaper that Chuck Grassley is a weirdo and has issues.

Why won't Chuck Grassley put his phone down for like ten seconds and give his wife a hug?

"I had had to tell him to knock it off," she said, motioning as if slapping the senator’s hand. "Put it away."

Imagine Chuck Grassley running around the house with his fly unzipped, his man meat just floppin' around everywhere as he frantically touch-types "140 byte" illiterate messages on his Twitter machine. Barbara yells at him, "Knock it off! Put it away!" So Chuck begrudgingly puts his junk back in his pants and then continues to leap about the house, tweeting as he goes la la la la. [Iowa Gazette via The Hill]