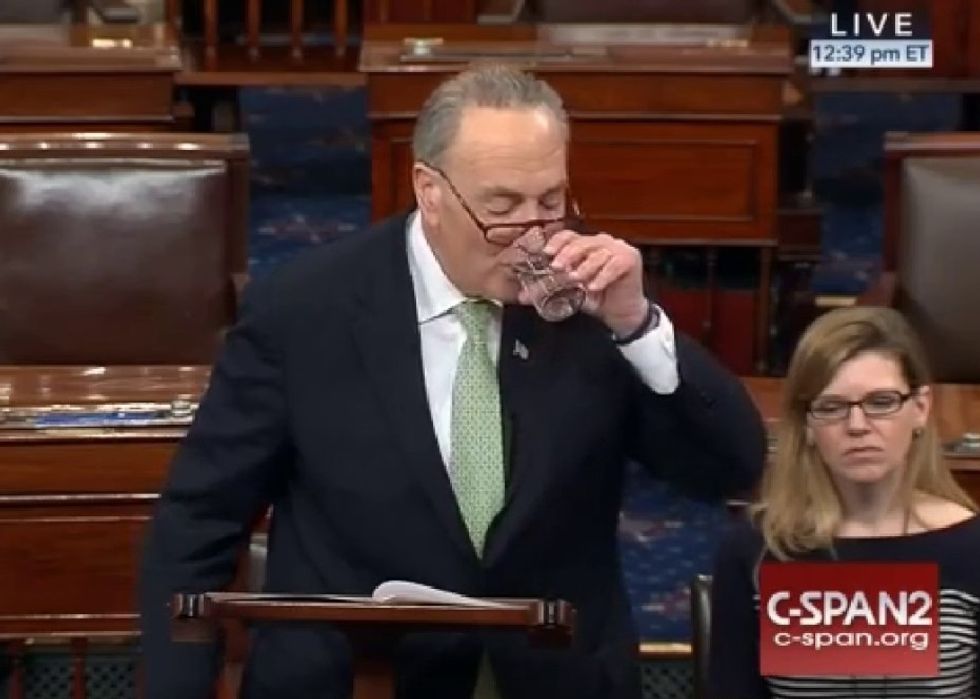 See, Donald, this is how you drink water with one hand.

Chuck Schumer reportedly sent word to the White House yesterday that Donald Trump can just forget that nice offer Schumer made last Friday to pay for a big chunk of the Wall in exchange for fixing DACA. Schumer had said during the weekend shutdown that he'd told Trump in the Friday meeting (which Politico tells us is now being called the "cheeseburger summit" ... no Coke, Pepsi) that he'd offered to meet Trump's request for border wall funding, but that Trump "can’t take yes for an answer. That’s why we’re here." Now that the shutdown is over, the wall offer has apparently expired, too. Trump better not expect a better offer in the future, either -- he had his chance and he threw it down the shithole.

Schumer “took it off,” said Sen. Dick Durbin (D-Ill.), the No. 2 Senate Democrat. “He called the White House yesterday and said it’s over.”

If Trump wasn't willing to sign on to a DACA deal with wall funding in it Friday, according to an unnamed Democratic aide, he's "missed an opportunity to get the wall." Or if you're the least bit cynical, at least until the next time it becomes useful to dangle the wall funding as an incentive for Trump to approve a DACA fix.

Sen. Jeff Flake thinks funding for the wall will have to be part of any compromise to prevent DACA recipients from being deported by Trump's own stupid decision to end DACA last September, and he thinks it might now have to be more than the $1.6 billion Schumer reportedly agreed to last week:

“Sen. Schumer’s already indicated that he would go for more. Republicans will go for more,” Flake said. “It’s just how much more we can get from the Democrats.”

Yes, and that's one of the "moderate" Republicans. Then there's rightwing freak Tom Cotton, who not only thinks "shithouse" is a nicer term for countries with brown people in them than "shithole," but also doubts Schumer's recollection of what happened in a meeting Cotton didn't attend:

“They claim that some crazy deal was made,” Cotton said of Democrats. “And then when we say no deal was made, they accuse Republicans and the president of reneging.”

Err... No, pretty sure Schumer et al. said Trump wouldn't accept a deal, not that he made one. That's why the shutdown, you know. The problem was that Trump had rejected a deal he'd previously said he'd be happy with. That's actually different!

Taking back the wall funding offer seems like a smart move now that DACA negotiations aren't going to be part of a deal to keep the government open (this week, at least); on Saturday, Illinois Congressman Luis Gutiérrez actually went a little further than Schumer, acknowledging that a wall is a terrible, wasteful idea that maybe he'd be willing to live with if it would shut up the orange idiot who doesn't seem to know that "Dreamers" and "DACA recipients" are actually the same people:

I think it would be a monumental waste of taxpayer money to build a monument to stupidity, but if that is what it is going to take to get 800,000 young men and women and give them a chance to live freely and openly in America, then I'll roll up my sleeves, I'll go down there with bricks and mortar and begin the wall. Because a brick for lives, okay? Let's do it.

Let me just say: That wall is offensive to me. It is insulting to me and people like me who have come to this country, but you know, people of my generation will do what they have to do. Because that is what we do for younger people.

Gutiérrez may be on to something: How about funding the wall in exchange for a path to citizenship for the Dreamers ... and we insist that Trump put on some overalls and lay a few bricks himself? Just tell him what a fantastic photo op it would be, then shoot the scene from the most unflattering angles. Bonus points if we could round up a veteran mason to look at Trump's inevitably sloppy work and curse him out in Spanish.

Yr Wonkette is supported by reader donations. Please click here to send us money. You're a hoopy frood who knows where your trowel is.