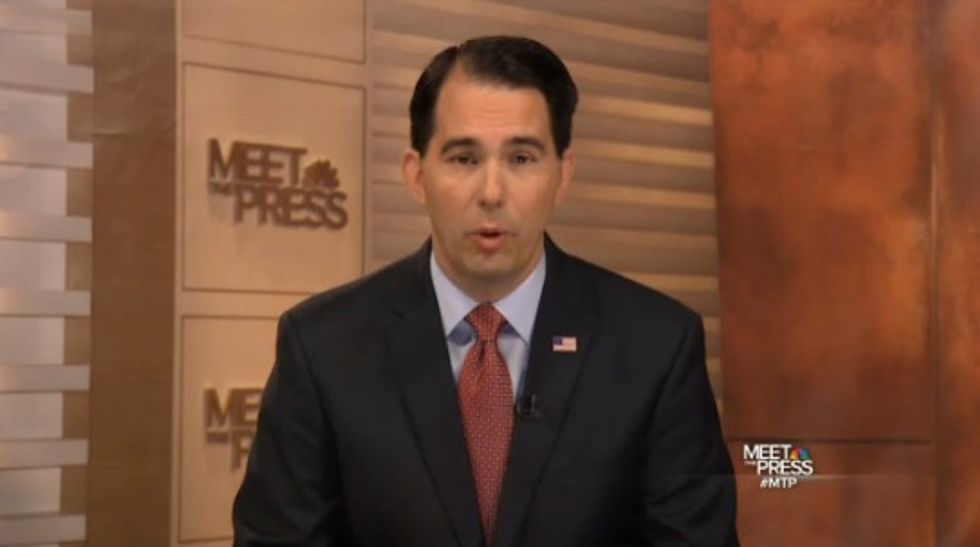 We have to admit, Wonketteers, that we did not stick to our Chuck Todd diet. We really did intend to get up every Sunday for Meet the Press to see Chuck's tough questioning of the Biggest Names in News and stay in shape with his touchscreen map upper-body workouts, but it wasn't until his first show after the Democrats were sent to live on the farm upstate that he enticed us to come back by landing an EXCLUSIVE interview with Scott Walker, King of Wisconsin.

Walker used his first major appearance since winning re-election on Tuesday to blame pro-union protesters for his failure to create jobs, dismiss the flaming budget chasm his state is facing due to his struggles with arithmetic, and pretend he cares about puny little Wisconsin when he's a mere 26 months from being sworn in as president of the United States.

Chuck Todd: I gotta ask you about 2016. You made a pledge in October that you were going to serve all four years. Does that pledge still hold?

Scott Walker: I said my plan was for four years. I've got a plan to keep going for the next four years. But, you know, certainly I care deeply not only about my state but about my country. We'll see what the future holds.

But what about that other guy from Wisconsin, the one who went road-tripping with Mittens Romnington a couple of years ago? What if he wants to make his own ill-fated run for president?

Chuck: Do you defer to Paul Ryan?

Scott: I love Paul Ryan. I've said many times before I'd be the president of the Paul Ryan fan club. But I do think if we're going to beat Hillary Clinton in this next election, we've got to have a message that says Hillary Clinton is all about Washington. I think in many ways she was the big loser on Tuesday because she embodies everything that's wrong with Washington. We offer a fresh approach. Any of us now 31 governors across the country have the executive experience from outside of Washington to provide a much better alternative to the old, tired, top-down approach you see out of Washington. We need something fresh, organic, from the bottom up, and that's what you get in the states.

This was our first encounter with the "fresh, organic" description of GOP governors. It was Sunday morning, so maybe Scott had just come from a victory lap around the farmer's market.

Chuck: You're not deferring to Paul Ryan, then. It sounds like you believe a governor, not a member of Congress, should be the Republican nominee.

Scott: Paul Ryan might be the only exception to that rule but overall, I believe governors make much better presidents.

You heard it on Meet the Press first: Scott Walker says swamp-dwelling Washingtonians Ted Cruz and Rand Paul would not be good presidents! (Actually, transcript notwithstanding, we are not 100 percent sure he did not say "Paul and Rand" rather than "Paul Ryan" -- listen at 0:56 and judge for yourselves.)