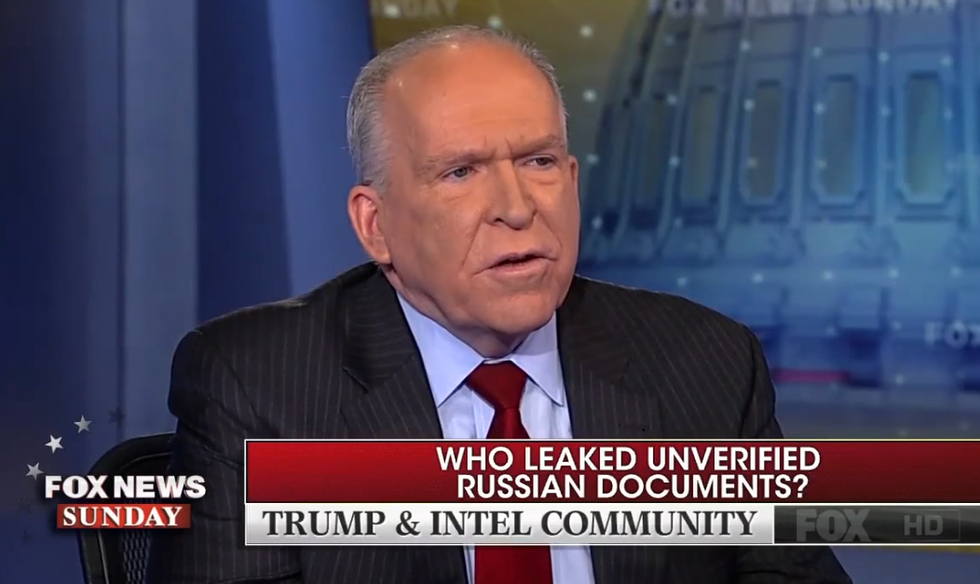 He is just saying.

We imagine one of the first things they do in Spy School, after they teach you how to do really badass high-kicks and stuff, is make sure you know how to answer questions all tricky-like. You can't just say stuff, because you're dealing with highly sensitive information! You have to be able to communicate things without actually saying them, so nobody can point a finger at you and say, "He said that thing."

Tommy Christopher noticed CIA Director John Brennan doing that very thing Sunday morning on Fox News, as Brennan very curiously answered a question Chris Wallace did not ask. Wallace did ask whether the CIA has intelligence indicating that indeed, the Trump campaign colluded with Russia during the campaign. Here's some transcript, and then we'll hand the talking stick to Christopher (start about six minutes in):

WALLACE: Does the intelligence community have any information — I’m not talking about rumors, information — about contacts between the Trump camp and associates of the Kremlin about discussions during the campaign about hacking the Democrats?

And so, if we did come into contact with that type of information, it would have been shared with the FBI, and we would make sure that our intelligence committees then were aware of it as well.

WALLACE: So, is there such information?

BRENNAN: As I said, if we came into — if we had that type of information, we would share it with the FBI.

Huh, why did Brennan not just answer that question? Or, if the answer was "NYET!" why didn't Brennan just say that, instead of telling us all about what the CIA might do if it hypothetically had intel like that? Tommy Christopher says this is pretty important, if you know how to translate Intelligence Speak into U.S. American English:

Brennan could easily have led with his refusal to confirm or deny, but instead, appeared to leave a trail of bread crumbs leading to the FBI, which is facing an Inspector General’s investigation. He also could have safely denied knowledge of such evidence without revealing classified information. [...]

Brennan volunteered that hypothetical twice, each time pointing the finger at the FBI as an answer to Wallace’s questions about the existence of information on Trump’s collusion with Russia. If such evidence existed before the election, this insulates Brennan from the charge that he did not act properly on such information. It is also a very different response than if Brennan had simply said at the start that he would neither confirm nor deny the existence of such information.

Hey look over there, at the FBI! Yes, the very same FBI where the director, James Comey, seems to be totally compromised and won't even tell Congress in a classified briefing whether he's investigating Trump, the FBI where the British spy who uncovered Trump/Russia intel reported that he sensed there was a massive cover-up meant to drag Hillary Clinton through the mud, while ignoring any and all intelligence about Trump -- maybe you should ask THEM about this. Because if the CIA had information like this, then hypothetically this is what the CIA would do, and it would be the FBI's job to investigate and act on that. SHALL JOHN BRENNAN DRAW YOU A MAP TO WHERE THE FBI OFFICES ARE? Because they are not in Langley, Virginia, where the CIA is!

Does John Brennan need to cough and wink and do secret hand motions, or do you catch his drift?

Elsewhere in the interview (which is very interesting and worth a watch!) Brennan said Barely-Elected Trump has literally no idea what he's up against with Russia, and that he should can it with his criticisms of the U.S. intelligence community, and instead put his big boy pants on and act like a president. (He didn't say it that mean, because, again, tricky-like.) So of course Trump took that to heart, then promptly forgot about it, chalked up his fingers so he could type on his Twitter without smearing his Obamaphone screen with pee (allegedly!) and responded like the petulant five-year-old he is:

Shut your yap, puppet. It must be hard to talk anyway, what with Putin's hand all the way up your ass.