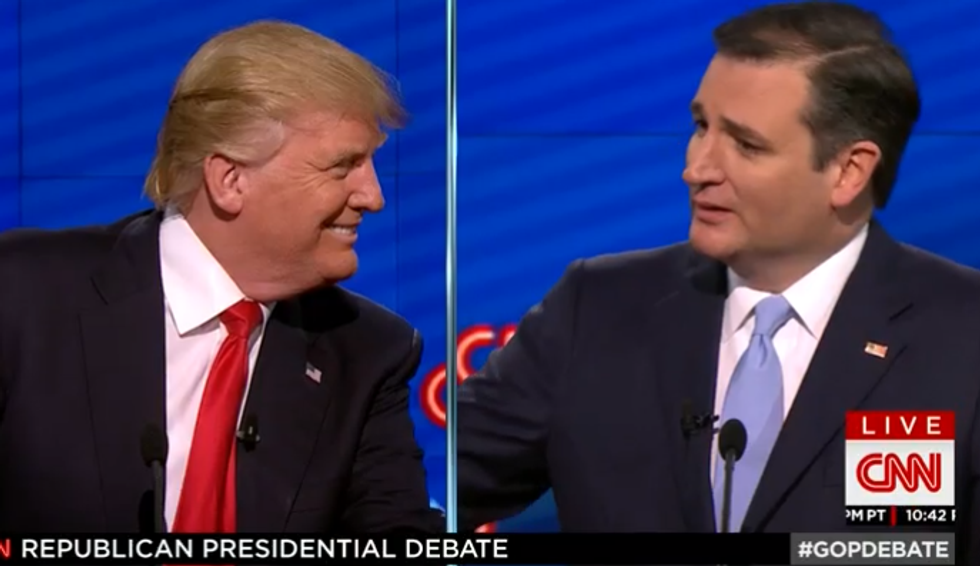 I KNOW SOMETHING YOU DON'T KNOW.

[contextly_sidebar id="Q2RMX06Olj2Ry0INg9h2HK8tFpdmAIy4"]World famous terrific businessman and frontrunner for the Republican presidential nomination (LOL) Donald Trump took a break Tuesday night from saying shit-ass things about the Brussels attacks to defend a woman's honor. Specifically, he needed to defend the honor of the woman he's closest to, the woman he considers the most bangable vagina-haver in all of the United States of Trump. His daughter Ivanka! Haha just kidding. Though he considers his daughter to be spectacularly fuckable, we're talking about his wife Melania.

You see, a Trump-hatin' super PAC called Make America Awesome has been circulating this ad:

[contextly_sidebar id="so8OHbXewUKvGXF14SE4ncHOa73HBlJi"]UH OH BOOBIES! Wonkette is a booby-positive mommyblog, so we must say this Make America Awesome group what's trying to elect Cruz and Stop Trump is a big fuck-passel of prudish dickholes. Of course, the group ran this ad (and a few others) to convince Mormons in Utah and Arizona not to vote Trump, presumably because seeing Melania all wet like that would make them feel shame up inside their magic underpants near their dirty-holes, and Ted Cruz DID win the United States Of Mormon Utah, so .... good job we guess?

So Donald Trump clocked in at his "office" AKA Twitter and blamed Ted Cruz, with an extra-special threat added for Ted's wife Heidi:

We should mention that was the second tweet Trump sent. In the first one, which he quickly deleted, he forgot to say "Lyin' Ted." It's all about branding, obviously, just like Trump Steaks and the Mar-a-Lago. How will people even know which smarmy choad-faced human punching bag named Ted Cruz he's talking about if he doesn't include his #branding?

[contextly_sidebar id="R0l1F4VmbAKgwDbQmC3weIgjzLrlNcKj"]Anyshizz, Ted Cruz The Canadian Fisty Man pulled his Canadian Fist out of his Bible Hole (he was having alone time and Trump interrupted him) and shook it at Trump on the tweeter:

Uh oh shots fired whoa, like Heidi Cruz probably got the biggest ladyboner of her whole life seeing her husband defend her like that. "Oh my foreign-born knight in shining armor!" she probably said before she raised her skirts and flung herself prostrate on the settee so she could show her appreciation, by copulating with her husband.

Where were we? (You? You are dying of the mental images in your head right now. You're welcome.)

So! Ted Cruz is technically correct, though we are loath to admit such a thing. He was not behind those ads. But WTF is Donald Trump threatening to reveal about Heidi Cruz???? Like, we've heard about the time she was found on the side of the road in Texas, and a cop thought she was a "danger to herself," and that she has struggled with depression. OLD NEWS, Trump, you can read it in last year's issue of "BuzzFeed" next time you're on the john.

We know she used to be a big Goldman Sachs Wall Street lady. Somehow we don't think that is what Trump is saying.

[contextly_sidebar id="dIWqvrhzCJmF6MwHIfNTdkFOfCkXplFQ"]We know she's legally blind, because she's on record saying that Ted Cruz looks just like God. (CORRECTION: Our sources at "science" have informed us that does not mean Heidi Cruz is "blind," but that she has bad taste in men, or maybe she's never actually seen what Our Lord looks like naked. OUR MISTAKE.)

We know she was so grossed out by Iowa Republican voters in the days leading up to the caucus that she was reportedly taking a whole bunch of showers every single day. This is actually pretty reasonable, because it's a known bit of Iowa State Trivia that all the state's Republicans are either currently fucking the Iowa State Fair Butter Cow up the ass, or they're waiting in line, at all times. They're a greasy people.

SO WHAT DOES DONALD TRUMP KNOW ABOUT HEIDI THAT WE DON'T? Is she a Democrat? Is she a secret Hill-bot who's only campaigning for her husband because she knows he's going to lose to her girl Hillz? Is she the hottest lay at CPAC, like every year? Do she and Ted have key parties with Ted's dry-drunk dad and Jesus? WHAT IS IT, DONALD?

Is there a sex tape?

Is it with Hulk Hogan? (RELEASE THE TAPE IF SO, GAWKER. This one actually WOULD be newsworthy.)

Did Donald Trump bang her????

Does she put on waders and dumpster-dive behind Planned Parenthood at night, so she can steal all the delicious Texas BBQ-style Planned Parenthood baby parts to eat for dinner, because she's too much of a cheapskate to pay full price?

We're dying over here, Trump. Help a buddy out.