Climate Change Denying Scientist Is Bought And Paid For, Surprise! 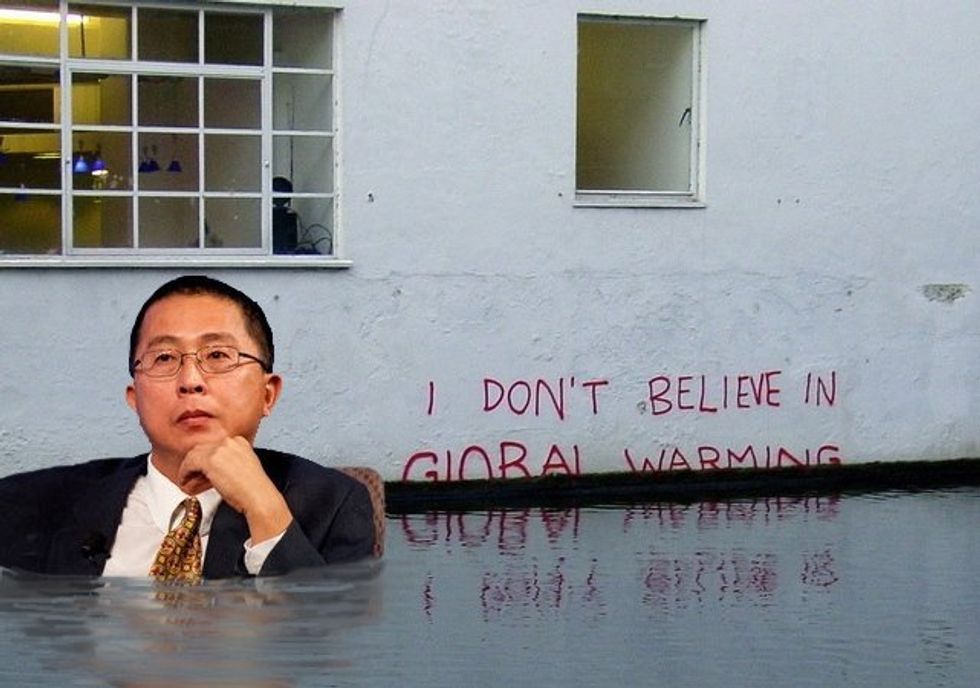 In what could turn out to be helpful news for the reality-based community, a new trove of documents show that one of the leading "scientific critics" of global warming has been funded directly by the fossil fuel industries. Wei-Hock Soon, who goes by "Willie," has traded on his position as a part-time employee of the Harvard-Smithsonian Center for Astrophysics to present himself as a legitimate scientist who's simply not convinced that human activity is responsible for climate change, which has made him very popular with conservative groups and politicians. But documents obtained through a Freedom of Information Act request show that his research was directly paid for by industry sources, to the tune of over $1.2 million. Worse, he's published at least 11 papers that failed to disclose those payments, a serious no-no in scientific ethics.

Say, New York Times, please share with us a paragraph that should make us all say "yikes!"

The documents show that Dr. Soon, in correspondence with his corporate funders, described many of his scientific papers as “deliverables” that he completed in exchange for their money. He used the same term to describe testimony he prepared for Congress.

So hey, it turns out that Indiana congressmoron Larry Bucshon was right: scientists are getting rich off doing research on climate. It's just that the ones getting rich are the ones saying global warming is fake.

Soon's "research," which claimed that variations in how much energy the sun puts out explain climate change on Earth, have already been dismissed by most scientists, who note that Soon is not a climatologist (his degree is in aerospace engineering) and that his papers are deeply flawed. But because he's associated with a reputable institution -- which has long distanced itself from his claims -- he looked just legitimate enough that many climate deniers, most notably Oklahoma Sen. Jim Inhofe, have paraded him as one of the Top Experts who doesn't buy into the scientific consensus on global warming.

In a Senate debate last month, Mr. Inhofe pointed to a poster with photos of scientists questioning the climate-change consensus, including Dr. Soon. “These are scientists that cannot be challenged,” the senator said.

Sen. Inhofe was very conveniently traveling and unavailable for comment on the Times article. Imagine that.

Soon was known to have ties to the fossil-fuel industry, but the FOIA request by Greenpeace revealed just how direct those connections were. He has always insisted that he's never been influenced by his industry connections:

“I write proposals; I let them decide whether to fund me or not,” he said at an event in Madison, Wis., in 2013. “If they choose to fund me, I’m happy to receive it.” A moment later, he added, “I would never be motivated by money for anything.”

His billing statements to his funders for all those "deliverables" should make for some fun explanations, we're thinking.

The documents show that Soon received at least $409,000 from The Southern Company, which operates coal-burning power plants, and which has of course heavily lobbied against greenhouse gas limits. And hey, there's also this completely independent scientist, Willie Soon, who says that CO2 has nothing to do with global warming, so that's pretty impressive. And of course he also was paid some $230,000 by the "Charles G. Koch Charitable Foundation," which apparently just likes to help out struggling scientists whose conclusions might be useful to oil billionaires. More recently, he's received "hundreds of thousands of dollars through DonorsTrust, an organization based in Alexandria, Va., that accepts money from donors who wish to remain anonymous, then funnels it to various conservative causes."

Not that he'd ever dream of skewing his research to please his funders.

Journals that have published papers by Soon that lacked any notification of his possible conflict of interest due to industry funding are reviewing the publications; it's possible that some papers may be retracted because of the ethical violations. Needless to say, we can look forward to Fox News defending Soon as a martyr who's merely the victim of scientific McCarthyism, shunned because he refuses to bow to the Leftist political agenda of Big Climate.

Go read the whole New York Times piece -- it's pretty incredible stuff, about a pretty un-credible "scientist." And while you're at it, go re-watch the episode of Cosmos that recounts how oil companies used paid "experts" to downplay evidence of the deadly effects of leaded gasoline. Gosh, who'd have dreamed the industry would do the same with climate science?