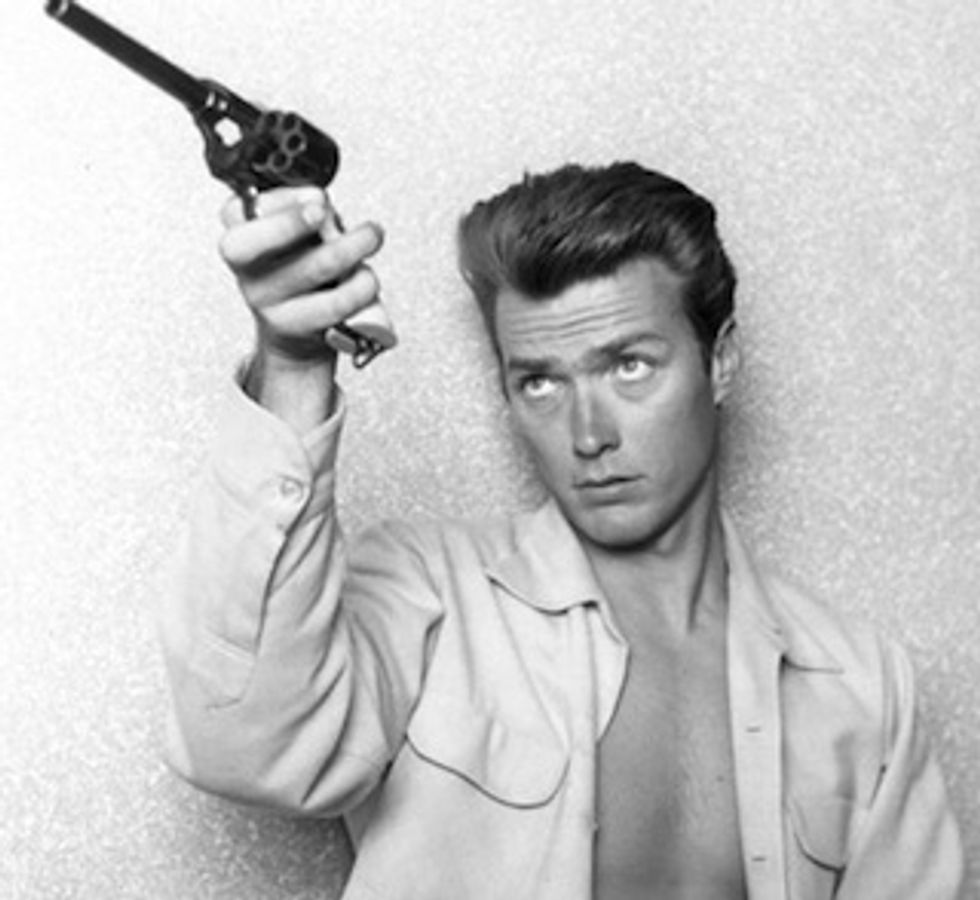 The Republican National Convention was interrupted for 15 minutes last night after an 82-year-old man wandered onstage and began muttering to a chair he believed to be the president of the United States. He was interrupted several times by large men with mustaches, but only because they were clapping.

It is unclear who forgot to teach Clint "I Fought in the Civil War" Eastwood what a teleprompter was, but the move caused many watching to describe themselves as "powerful confused."

There is no way to explain whatever it was Eastwood did last night. It may have been a speech in the planning phases, but what came out appeared to be more of a prolonged, pseudo-political brain-fart, the weird consequence of propping up a spaghetti western star to observe him having a stroke.

Presented here are his exact words, trimmed because WOW there are a lot of them that didn't make sense.

[We see he is gesturing toward an empty chair. Mayhaps Obama was busy?]

And he’s -- I was going to ask him a couple of questions, but -- you know about -- I remember three and a half years ago, when Mr. Obama won the election, and though I was not a big supporter, I was watching that night when he was having that thing and they were talking about hope and change and they were talking about, yes we can, and it was dark outdoors, and it was nice, and people were lighting candles.

Fun fact: One of Eastwood's speechwriters was the corpse of James Joyce.

They were saying, I just thought, this was great. Everybody is trying, Oprah was crying. I was even crying.

And then finally -- and I haven’t cried that hard since I found out that there is 23 million unemployed people in this country.

[All the employed people in the room clap.]

Now that is something to cry for, because that is a disgrace, a national disgrace, and we haven’t done enough, obviously -- this administration hasn’t done enough to cure that. Whatever interest they have is not strong enough, and I think possibly now it may be time for somebody else to come along and solve the problem.

THE ENDORSEMENT! "I think possibly now it may be time for somebody else to come along and solve the problem." Clint might as well kiss Mitt's feet!

Here's where it starts to kind of fall apart. Speeches almost always go downhill when they are interrupted by people who are being imagined. (Sermons notwithstanding, of course.)

Well, I know even people in your own party were very disappointed when you didn’t close Gitmo. And I thought, well, closing Gitmo -- why close that? We spent so much money on it. But, I thought maybe as an excuse -- what do you mean shut up?

OK, I thought maybe it was just because somebody had the stupid idea of trying terrorists in downtown New York City. I’ve got to to hand it to you. I have to give credit where credit is due. You did finally overrule that finally. And that’s -- now we are moving onward.

Props to Clint on this one. Political conventions hardly ever feature "giving opponents credit for stuff." This made the speech much better.

I know you were against the war in Iraq, and that’s okay. But you thought the war in Afghanistan was OK. You know, I mean -- you thought that was something worth doing. We didn’t check with the Russians to see how did it -- they did there for 10 years.

There's no snark left in the tank here. The man made no. sense. (Also: It is totally hunky-dory to be against the war in Iraq. Good to know.)

And then, I just wondered, all these promises -- I wondered about when the --

Clint Eastwood: Will let gays get married and babies get aborted, will not tell Mitt Romney to fuck himself. Noted.

You’re crazy, you’re absolutely crazy. You’re getting as bad as Biden. Of course we all know Biden is the intellect of the Democratic Party. Kind of a grin with a body behind it.

What other kind of grin is there? Is Eastwood seeing disembodied grins? WILL NO ONE HELP THIS MAN?

But I just think that there is so much to be done, and I think that Mr. Romney and Mr. Ryan are two guys that can come along.

He's really laying it on thick, you guys. I think he might consider maybe almost voting Republican.

See, I never thought it was a good idea for attorneys to be the president, anyway.

But, I think it is maybe time -- what do you think -- for maybe a businessman. How about that?

And I think if you just step aside and Mr. Romney can kind of take over. You can maybe still use a plane. Though maybe a smaller one. Not that big gas guzzler you are going around to colleges and talking about student loans and stuff like that. You are an -- an ecological man. Why would you want to drive that around?

OK, well anyway. All right, I’m sorry. I can’t do that to myself either.

Mitt Romney will trade you a small plane for the presidency, please. Also, fuck college students and their hippy-dippy demands for "an affordable education." Also, Faux-bama is RUDE.

I would just like to say something, ladies and gentlemen. Something that I think is very important. It is that, you, we -- we own this country.

We -- we own it. It is not you owning it, and not politicians owning it. Politicians are employees of ours. And -- so -- they are just going to come around and beg for votes every few years. It is the same old deal.

(See: Conventions like the one at which Eastwood said this.)

But I just think it is important that you realize , that you’re the best in the world. Whether you are a Democrat or Republican or whether you’re libertarian or whatever, you are the best. And we should not ever forget that.

And when somebody does not do the job, we got to let them go. Okay, just remember that. And I’m speaking out for everybody out there. It doesn’t hurt, we don’t have to be—

[He is interrupted by a real person.]

I do not say that word anymore. Well, maybe one last time. We don’t have to be -- what I’m saying, we do not have to be metal [???] masochists and vote for somebody that we don’t really even want in office just because they seem to be nice guys or maybe not so nice guys, if you look at some of the recent ads going out there, I don’t know.

Don't vote for people you don't want to be voting for, kiddos. Probably.

But OK. You want to make my day?

All right. I started, you finish it. Go ahead--

Thank you. Thank you very much.

In other news, early reports indicate an empty chair was just elected president.

For an alternate take, see The Blaze, which headlined the speech "Clint Eastwood Comes Out Shooting," and said the speech was "steady and grit-filled," with "a steady aim at the Administration and the policies of the last four years." Certainly makes one wonder why the AP is reporting that "backstage, stern-faced Romney aides winced at times as Eastwood's remarks stretched on." [Washington Post]