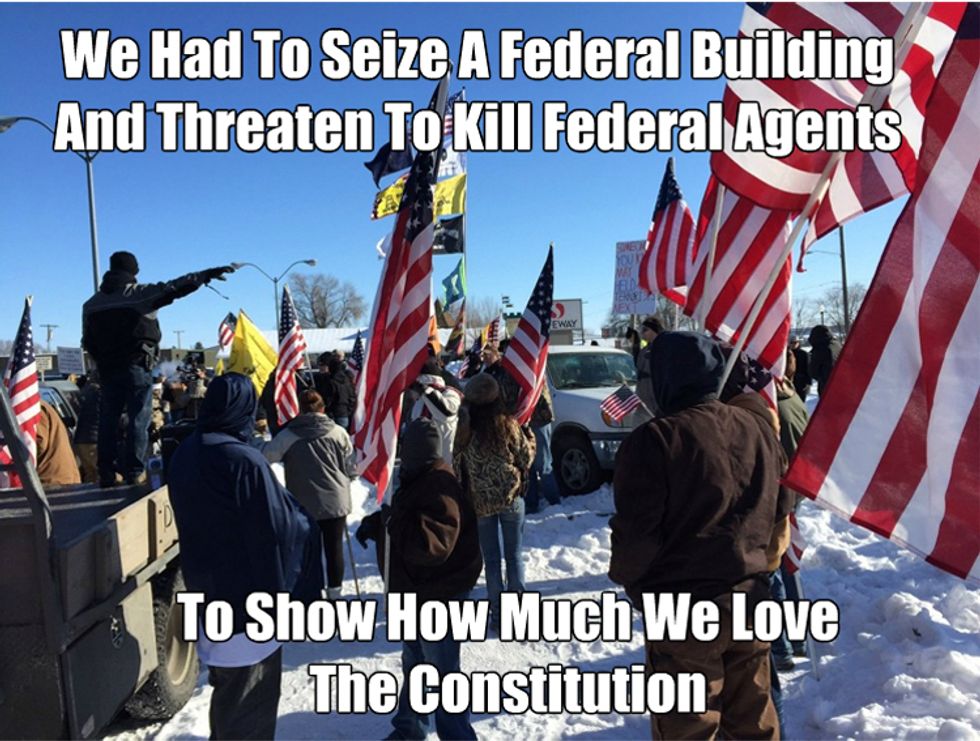 [contextly_sidebar id="t12MbOlls2DheDR1dQoDpUOqIZoagus1"]Big news from the Malheur National Wildlife Refuge in Oregon Wednesday night. While most of the armed militia squatters are already rotting in jail as political prisoners, the FBI decided it was sick of waiting for the remaining four to surrender already, moving in on the refuge and bull-horning that really, people, it's time to surrender now.

The four are expected to surrender Thursday morning thanks to the brilliant negotiation skills of Nevada dingbat assembly lady Michele Fiore, who spent Wednesday night on the phone with the patriots, agreeing with them that yes, Big Government is bad and wrong, but if they'd just hands up, don't shoot, they could end up not dead, and wouldn't that be nice?

Fiore had traveled to Oregon to do a Very Peaceful Protest alongside militia patriarch Cliven Bundy, but that's probably not going to happen, since Cliven was arrested at the Portland airport and charged with "conspiracy to interfere with a federal officer and weapons charges." At least he can keep his boys Ammon and Ryan company in the pokey now.

It all began late Wednesday afternoon when one of the four remaining occupiers rode beyond the barricades set up around the refuge:

At approximately 4:30 p.m. (Pacific) on Wednesday, February 10, 2016, one of the occupiers rode an ATV outside the barricades established by the militia at the Malheur National Wildlife Refuge. FBI agents attempted to approach the driver, and he returned to the encampment at the refuge at a high rate of speed.

At this time, the FBI has moved to contain the remaining occupiers by placing agents at barricades both immediately ahead of and behind the area where the occupiers are camping. Negotiations between the occupiers and the FBI continue. No shots have been fired.

And no shots continued to be fired. However, it was clear that it was time to surrender, as the FBI is Tired Of This Shit. And because all Very Important History apparently plays out on social media these days, the event was livestreamed by the militia. How exciting for us all.

[contextly_sidebar id="0L5qFC524SQ5ju4OKBFVvkGT7FRsUsFH"]Thank baby Jesus for Michele Fiore. (Kind of.) She had traveled to Oregon for some sort of Very Peaceful Protest that was to have occurred Thursday night. But instead of taking her guns and her Bible and her boobs to the Ramada, she ended up sitting on a phone in the Portland airport doing makeshift hostage negotiations.

.@OPB has confirmed the stream from the camp is accurate. pic.twitter.com/KwveRxkyYx

By the end of the night, Fiore was able to tell the anti-government insurgents that everything was OK, the mean feds were going to stand down, and also she was going to bring wingnut Franklin Graham, son of internationally known evangelist Billy Graham, to see them, and they would all walk out of the birdwatching camp Thursday morning peacefully, looking like a really fucked up touring cast of The Wizard Of Oz probably:

"They have given us their word that they are going to stand down tonight," Fiore said, "and in the morning when you guys are going to come out, me and Graham will meet you at that point, and they have promised us that. They've promised us... I expect them to honor their promise."

The good news is nobody got shot, and yr Wonkette would like it to STAY THAT WAY, PLEASE. These militia dickweasels are grade-A weaseldicks, but we really don't want any more of them to die, and, as Fiore said while trying to talk them off the ledge, “one martyr is enough.” We give her one gold star for saying that, and for trying to keep these True Patriots from getting themselves killed in the name of liberty. For future reference, if she really wants to be helpful, she might consider toning down her anti-government argle bargle to discourage future dumb assholes from taking up arms against the evil feds in the first place.