Cliven Bundy Gets Sued, Hides Behind Skirt Of Big Government 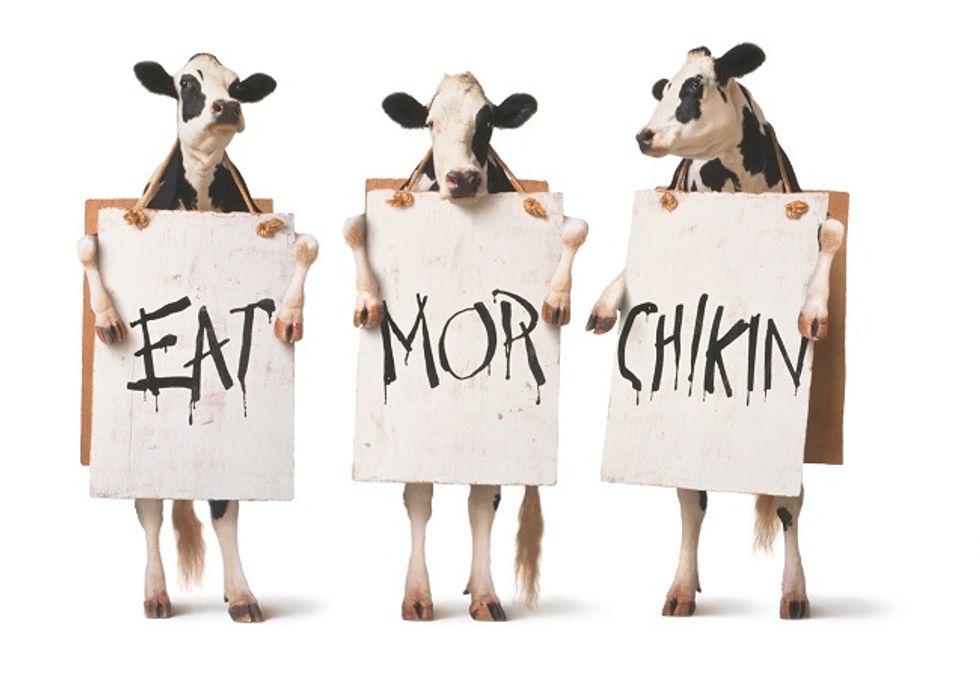 Ho ho, Cliven Bundy, you fat sack of mooching crap! What shenanigans are you and your family of freedom-lovingcutlery enthusiasts getting up to now? Applying for jobs as lecturers in African-American Studies at schools in wingnut-heavy districts? Threatening to tear off Harry Reid’s magnificent yarbles? Getting sued for letting your cattle wander onto an interstate, thereby causing a car crash that badly injured someone? Wait, that’s a new one!

It seems that back on April 14, just two days after the Bureau of Land Management backed down in its confrontation with Bundy’s army of ammosexuals and returned the rancher’s cattle to him, a woman named Danielle Beck and her boyfriend were driving on Interstate 15 in Nevada when they suddenly found all the lanes blocked by a herd of cattle. The boyfriend, Mark Zanatta, tried to swerve around the cows but hit one, killing it and sending the car into a culvert. Beck suffered a whole bunch of fractured ribs. She’s suing Bundy for $20,000 for medical damages and lost income, since the schoolteacher was unable to take a summer job like she usually does to earn some extra cash.

Bundy’s response? "Hey, I turn my cattle loose on all this land near an interstate. If there happens to be a fence with a giant hole in it, them’s the breaks," basically.

He said it is the state’s job to maintain the fence that keeps his livestock off the interstate.

“It’s a state problem. It’s not our problem,” Bundy said. “We really feel bad when it happens. We sure don’t want it to happen. But we’re not liable.”

So Sagebrush Guy Fawkes, that rugged individualist who doesn’t recognize a level of government above the local county sheriff (to whom, you may recall, he tried to pay those grazing fees he owed because he does not believe in the existence of the federal government), now wants the state of Nevada to maintain a fence on land it does not actually own so that he may continue to let his cattle roam freely, without legal or financial consequence to himself. The conservative/libertarian model of self-reliance and small government without the power to enforce regulations of any sort continues to show itself to be one to which we should all aspire.

Just to add insult to injury, Bundy said he has the right to make a claim against Zanatta and Beck for the value of the cow they killed. Because those damn hippies should have expected to see a bunch of cattle wandering in the middle of the interstate at two in the morning and been more careful, we guess.

We look forward to Cliven Bundy’s next interpretation of the intersection of law and personal responsibility, when he will probably shoot someone multiple times and then demand the government return all the bullets to him.