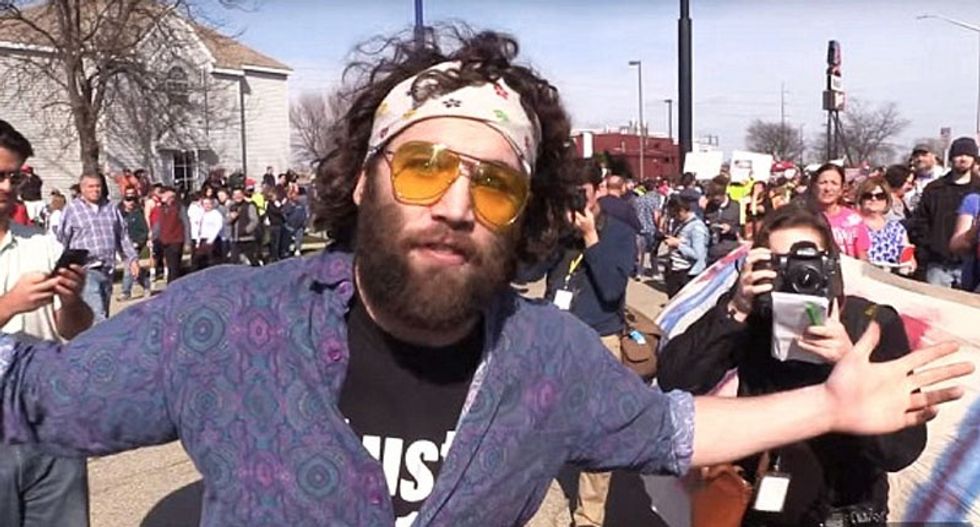 The violence at Trump rallies took a surprising turn this week outside his rally in Janesville, Wisconsin. In addition to the still-unidentified (yes, still) jerk who pepper-sprayed a 15-year-old girl, we also have this indisputable proof that Both Sides Do It: A hippie dude yelling at Trump supporters, calling one of them a "fat bitch" (which isn't nice at all) and then inexplicably attempting a backflip which failed spectacularly. As protest, it was a considerable comedown from the Yippies' 1967 attempt to levitate the Pentagon.

The guy was busy taunting Trump supporters standing in line when someone yelled at him, "What are you smoking?" The Daily Mail picks up the tense standoff that ensued (We've restored the actual words, cleverly hidden by asterisks in the original):

"Is that what you think, I'm on drugs because I hate this fascist prick? Fuck you, ya fat bitch!"

Seeming to realize he is being filmed while abusing the woman, he then turns to the camera, waving his arms and continuing to shout.

And then the guy attempted a very sad backflip while a clever Trumpian shouted "Look at the monkey! Look at the monkey!" The first 4/5 of the backflip were successful, but he didn't quite stick the dismount. After landing flat on his face with a pathetic thump, the dude got up (remarkably quickly, considering) and shouted "I did that on purpose. It’s all a fucking show here!" before stalking off to reconsider whether he wants to keep "activist" on his résumé. As street theater, it was at least a partial success, in that the street played a vital supporting role.

Janesville police have cleared the pavement in any wrongdoing in the incident, but are still investigating whether the man's post-pratfall statement is a copyright infringement against Pee-Wee Herman.