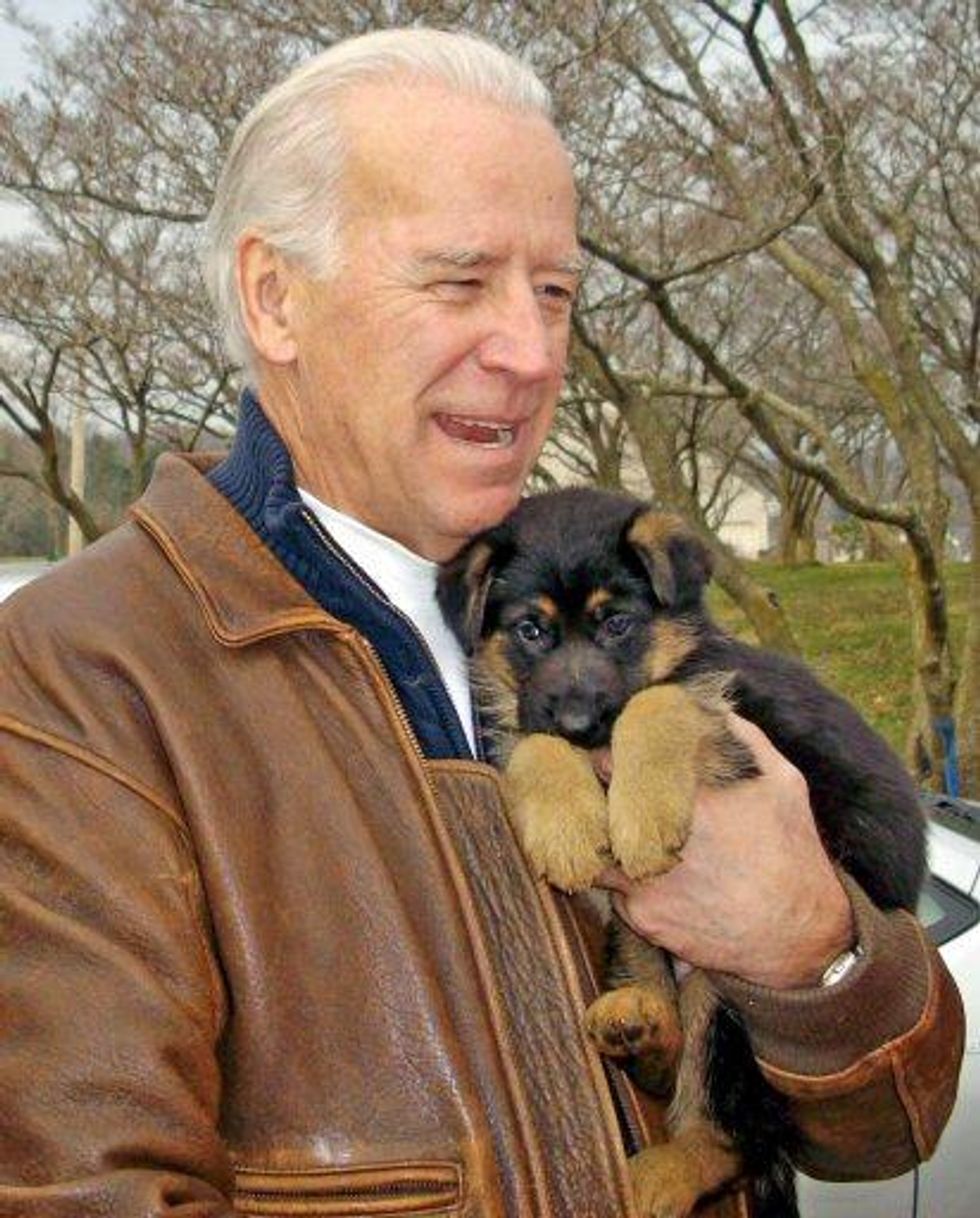 This is actually an adult doggie now. Good dog, Champ!

CNN announced Monday that it had revised its rules for the first Democratic primary debate so that Old Handsome Joe Biden can participate, if he happens to decide to run for president. The network made the announcement after "accidentally" bumping into Biden by his locker after chemistry class, at which time the cable news organization shyly let it be known that participants could announce their candidacy as late as the day of the first debate, to be held in Las Vegas on Oct. 13, if he's not doing anything that night. Biden reportedly said he might be washing his hair. CNN then blushed and ran down the hall, dropping a note that had "CNN + OHJB" written all over one side and "Do You Like Me? Y____ N____" on the other.

Under CNN's criteria for the debate, candidates must also be polling at a minimum average of 1 percent in three polls between Aug. 1 and Oct. 10, which means that Martin O'Malley, Jim Webb, Lincoln Chaffee, and the Pizza Rat will qualify.

There is no chance at all that CNN is only doing this to fluff its own ratings, or to try to influence Biden's decision-making process. The network is simply letting the vice president know it will hold a lectern for him at the Wynn Las Vegas, and all the other kids will be there, and there'll be popcorn and games and a Spin Room. Also, does he really want Hillary and Bernie to be the only interesting people at the party, plus those other three dweebs that CNN's mom said it had to invite? (Lame. Like anyone wants to even see them.) And CNN certainly doesn't come off as desperately trying to inject additional drama into the debate, not with a line like this appearing in its own damn story about the new criteria:

Biden, who has publicly struggled with deciding whether to join the primary, has met the minimum polling threshold for entry into the debate. He would only need to file the necessary paperwork with the Federal Election Commission or declare his intention to do so to appear on stage at the Wynn, according to the criteria.

For that matter, maybe all Biden needs to do is show up and say he's still thinking about it. They'd be OK with that, too.

Vice President Biden hasn't publicly commented on CNN's overtures; sources indicate that he feels flattered but ambivalent, and would be a lot more comfortable if CNN would be a little more subtle, for godssake. CNN insiders vow that they'll get Biden on that stage one way or another, even if it involves a wacky plot in which Don Lemon puts on glasses and a wig and pretends to be CNN's "cousin from out of town" so he can say nice things about the network to Biden down at the Soda Shoppe.

Also too, if you don't mind us suddenly departing from the CNN Awkwardly Woos Biden In A Bad Teen Sitcom narrative, Yr Wonkette has to say that CNN's announcement strikes us as weird, cynical, and manipulative, not to mention a bit creepy, given that Joe Biden is a man who's still deeply in grief from losing his son, as anyone knows who's watched the Stephen Colbert interview. Christ, CNN, let Joe make up his mind himself, you vultures.