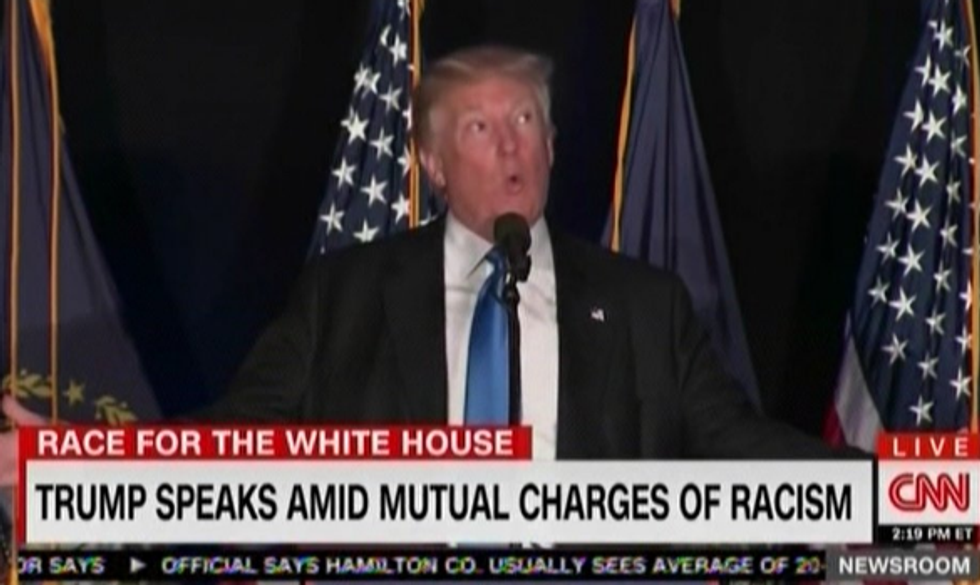 As we were waiting for Hillary Clinton to come onstage in Reno and tell everybody about the "alt-right," a group of undersexed racists who are lover pals with Donald Trump, Donald Trump was also speaking in New Hampshire. So all the networks tried to stay on top of this big news, and of course this means somebody at CNN should fire they-self for doing something stupid and wrong and being bad at "news":

Let us review. Donald Trump called Hillary a "bigot" during a rally in Mississippi, because he's hopelessly trying to pretend he can gin up support among black voters, for his obviously racist ass. Trump has been showing us throughout this entire campaign that he's a homegrown extremist racist, or at least that he's more than willing to play one on TV, and so he racistly told his white supporters in Mississippi that Hillary is THE REAL RACIST. The same man whose rallies are literally #UnsafeSpaces for black folks; who talks about "my African-American," because he has a black friend; who wishes he was "a black" because "a blacks" have it SO MUCH EASIER; who stood up last week and told black folks that their lives were basically worthless shit, so "what the hell do you have to lose" by supporting him.

[wonkbar]<a href="http://wonkette.com/605906/badass-hillary-clinton-ad-just-saying-donald-trump-and-the-kkk-are-madly-in-love-is-all"></a>[/wonkbar]Meanwhile, Hillary has a new ad and is giving a speech about how Trump is LITERALLY the favored candidate of white supremacists, and how he has LITERALLY cozied up to the white supremacist "alt-right," going so far as to bring a shining Dead Breitbart beacon of that movement in to run his campaign.