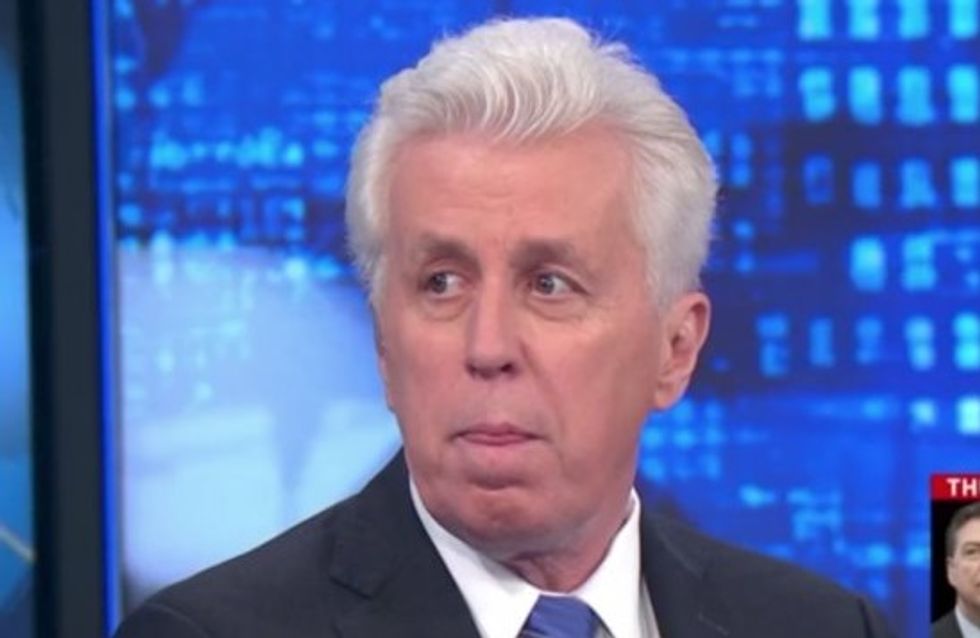 Mortals, what fools these Lords be!

CNN shitcanned its resident Trump humper, Jeffrey Lord, on Thursday, not because he's a brainless puddle of Trump sycophancy and suet, but because he made what he insists was a perfectly innocent Nazi joke on the Twitters. The New York Times reports Lord got the news by phone while being fetched to CNN's studio in Manhattan in a town car from his home in Harrisburg, Pennsylvania:

After Mr. Lord, 66, learned that his contract had been severed, the car turned around. “I didn’t have to walk; I thanked them for that,” he said in an telephone interview from the road.

Not that he'd stoop to being petty or anything (we'll confess, we initially misread that as "a telephone interview from the side of the road" and thought the Grey Lady was making a funny; instead it was just making an typo).

Lord got the boot after a dumb Twitter exchange with Media Matters for America president Angelo Carusone, the target of a recent Lord rant accusing Media Matters of "fascism" for listing Sean Hannity's advertisers. If there's one thing the fascists were notorious for, it was organizing consumer boycotts of those they disapproved of. How well the world remembers Papiernacht, when Hitler's brownshirts published articles suggesting advertisers withdraw their support of Jewish businesses.

When Carusone pointed out that Lord's tweet promoting a follow-up article had misspelled his name, Lord got snotty, because JUST LOOK at the liberal fascist bossing him around like some kind of Spelling Nazi!

Only the worst sort of fascist would demand his name be spelled correctly, after all. But even though Lord was Only Joking, CNN apparently saw the opportunity to save some money on its payroll, and gave Lord the jackboot, issuing a brief statement saying "Nazi salutes are indefensible [...] Jeffrey Lord is no longer with the network.”

Now, we'll confess to just the slightest, tiniest bit of sympathy for Lord, here. The joke itself was clearly not an endorsement of Nazism, and not nearly as good a reason to dump Lord as, say, the totality of everything he's ever said on-air. It's likely CNN was looking for an excuse to dump him, and happily moved as soon as Lord gave them one.

As the New York Times reported back in April, Lord was hired after Donald Trump Himself recommended him, and Lord was unfailingly loyal to all of Trump's positions, even when that required him to bend himself into insane pretzel postures.

If You Think Donald Trump Said Megyn Kelly Was Bleeding From Her Hoo-Ha, You're A Nazi

Consider one of Lord's earliest attempts to clarify stuff for the Great Man, after the first Republican primary debate. After Trump said Megyn Kelly was "bleeding from her wherever," Lord explained that anyone who thought that could even remotely mean Trump thought she was having a visit from Aunt Flo was obviously insane:

What has followed has been 48-hours of the most disgusting pieces of political analyses I have ever heard in my life. A pluperfect example of the insight of Hitler’s Minister of Propaganda Joseph Goebbels: “If you tell a lie big enough and keep repeating it, people will eventually come to believe it.” There was not a word said, not a hint, not a suggestion, that Donald Trump ever said Megyn Kelly asked her lead question of him because she was menstruating. Say again… not… a… word. Not one. This is — there is no other word for it — a Goebbels-esque lie.

Oh, lookie that! He was calling people Nazis from the get-go. Imagine that, what a huge surprise. (Also, "pluperfect" is a verb tense. It does not mean "really really perfecter than perfect, like so totally perfect.")

Now that he's been on the receiving end of a "You're Fired!" Lord says he's received a supportive phone call from Steve Bannon, who told him to "keep fighting," to which Lord bravely -- and we'd like to believe, tearfully -- replied, "Absolutely."

Lord also -- and here's another big surprise -- accused CNN of being exactly like You-Know-Who: "The notion that you cannot make fun of people who use Nazi tactics — they're caving to the Nazi tactics," said Lord, who we almost think may never have heard of any other objectionable political movements, ever. He also accused CNN of having "caved on the First Amendment of all things," which means his understanding of the First Amendment is as thorough as his understanding of fascism.

But don't you go crying for Jeffrey Lord, victim of the Nazis. He told the New York Times he's doing fine, just fine, even with all the stormtroopers nipping at his heels:

Mr. Lord said that he had already received an inquiry from a prospective employer, and mentioned an interest in appearing on conservative talk radio. He said he was also close to finalizing a deal for a book “about the president and the fights he has with various forces.” The tentative title: “The Lion at the Gate.”

But it's all been worth it, he says, since his indefartable defenses of the Best President in the World have made him famous:

“I’m recognized all over the place,” he said. In Manhattan this week, he added, “I was stopped six or seven times by people wanting selfies with me.”

People want selfies with a guy who's on TV? That surely proves the justice of his cause. Say, you know who else liked posing for photos with the common people? In any case, don't think you've heard the last of Jeffrey Lord. He told the Times he's "written seven unpublished novels," which sure as hell sounds like a threat to unleash the things on an unsuspecting world. And if no one publishes them, that's more proof the fascists are everywhere.

Yr Wonkette relies on your donations to keep us oppressing people like fascists. Please click the "Donate" clicky. You know, Hitler clicked a lot of links, too.