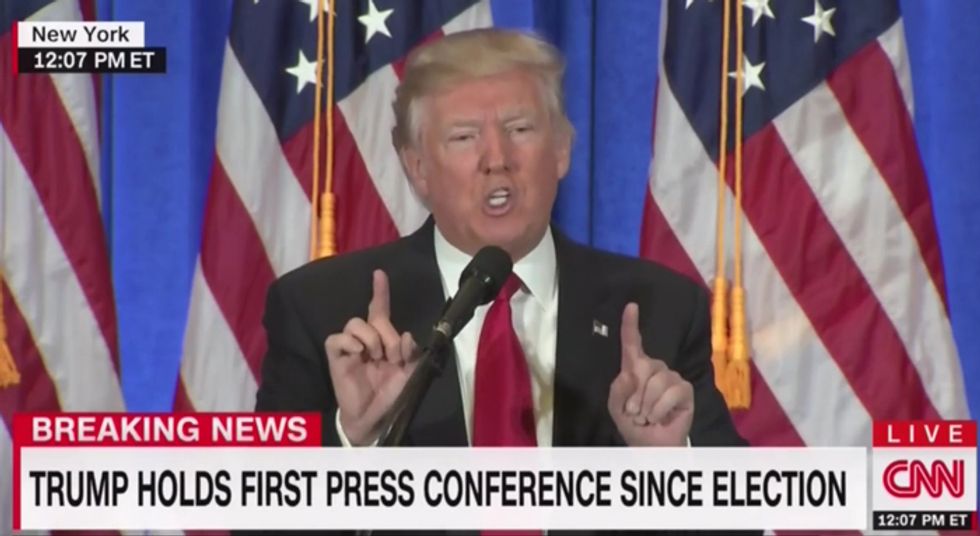 Is this Nazi Germany? No. That's why I'm not taking questions from the Lugenpresse.

In a surprising turn of events, Donald Trump has decided he loves the media now, all except for CNN and Buzzfeed, which are failing and going out of business because nobody believes they are fake news, obviously. In his presser Wednesday, Trump first dismissed the documents alleging ties between his campaign and the Russian government as "fake news," which of course now means "news I don't like," claimed that "Nazi Germany" would have done something like publishing unverified intelligence reports that were unflattering toward its leader (he may want to brush up on Nazi press policies), and decried Buzzfeed as a "failing pile of garbage.” He then took the opportunity to tell CNN reporter Jim Acosta he was not a real reporter because he is from the fake news network, so sickening he can't even believe it:

"No, I'm not going to give you a question," Trump tells reporter. "You are fake news." https://t.co/gVp2PQ1ucIpic.twitter.com/o2JwpwqBRp

CNN's @Acosta: Trump spokesman @seanspicer warned he'd be expelled from presser if he pushed for another question https://t.co/i1GjmeOREe

At one point during this news conference, in the interest of full disclosure...after I asked and I guess demanded that we had a question, Sean Spicer, the incoming press secretary did say to me if I were to do that again, I was going to be thrown out of this press conference.

So there you have it: The first official banning of a news organization from the Trump administration, before there is a Trump administration. It's an excellent warning to the press to stop acting like it's Nazi Germany. No word yet on whether the Trump Flying Monkey Brigade has yet come after Mr. Acosta's family, but give them time. They're just expressing their free speech to protect the Leader from all the lies out there.