CNN Steps On Own Dick, Wonders If Prince's Death Is Good News For Trump And Hillary 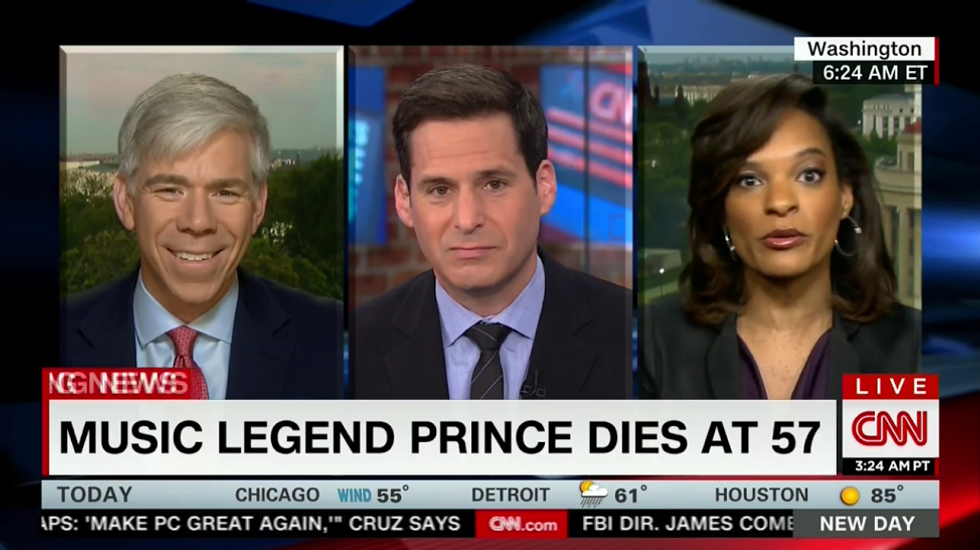 Know what's been nice? Since Prince's untimely passing on Thursday, people really haven't said hardly anything shitty about it. Cities large and small have gone purple, the cast of Broadway's The Color Purple sang the tribute to end all tributes, and people are just pretty much still in shock.

So CNN decided to act like CNN and fuck that all up:

ANCHOR JON BERMAN: Does this freeze the race a little bit, maybe benefit Hillary Clinton and Donald Trump, who are coming off big wins?

NIA-MALIKA HENDERSON: You know, I don't know, I think everybody's mourning the loss of Prince ... so maybe so, it's this rare moment we've had with Prince, who was, I think a figure where everybody liked him ...

And so on! We come not to condemn Henderson's answer, as it was a fucking stupid question and CNN should feel bad. We are also not here to condemn David Gregory for sitting there with a goofy 'scited grin on his face like it's the first time he's ever been on TV.

But way to stay on top of things, Jon Berman, and capture the zeitgeist of what everybody is wondering, whether the death of an American icon might be GOOD FOR HILLARY or GOOD FOR TRUMP. You dumb knuckle-fuck.

Besides, the answer to his question is obvious. The only person Prince's death is good news for is John McCain. Don't know why, but that's how things work.

Speaking of Hillary and Trump, though!

They both actually had very nice things to say about Prince's passing. Here's Hillary not long after she found out, talking to Philadelphia's WDAS-FM. She sounds kinda like all of us do, sad and shocked:

I feel badly about Prince. Not really, though. I never really — I never saw him in concert. That was a mistake for me not to have been able to follow him, to see him in concert. Because he was an extraordinary musician and they say they have enough unrecorded music now to last, they could put an album out every year for 100 years. Remarkable.

Anything you'd like to add, Bernie Cruz and Ted Sanders?

APPARENTLY NOT! Not yet anyway, that we can find. To be fair, Bernie Sanders is a sweet old man, so he may have missed out on the Prince thing by just a hair. Maybe in those unreleased recordings, they will find a Prince song that's good for dancing the Charleston, and Bernie will #FeelTheBern, but for Prince? Or maybe he will say a thing real soon!

So that's your current preznit-wannabes and where they stand on Prince. Let's close out this post by watching that tribute from the cast of The Color Purple, because it's THAT awesome. Stay purple, loves.