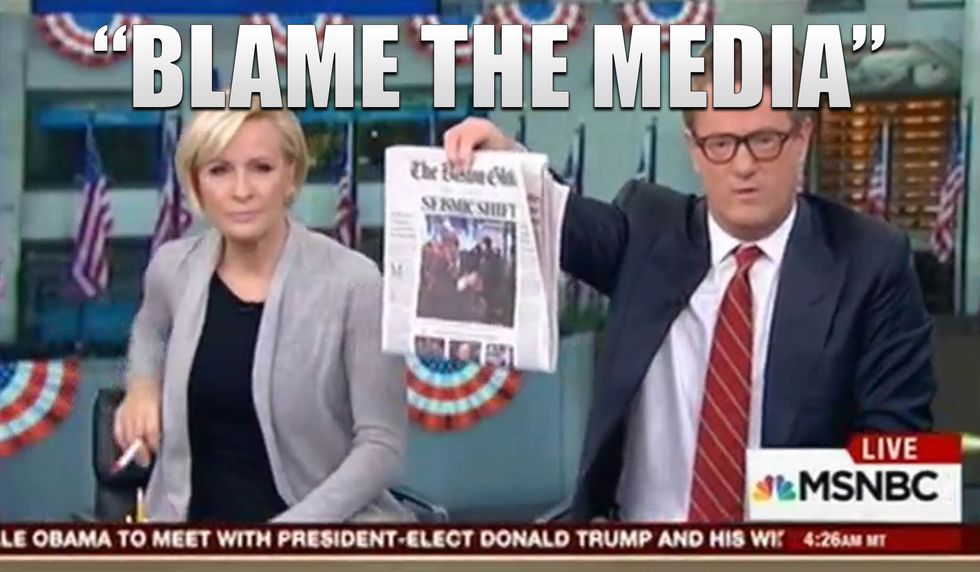 RUH-ROH, there is a media rumble a-brewing, and it is between CNN host Chris Cuomo and those two lovable fuck-birds (ALLEGEDLY!) Joe and Mika Scarborough-Brzezinski, what host the "Morning Bone-Zone, With Mika And Joe!" television program on MSNBC! What happened was, according to Mediaite, a media guy called Angelo Carusone tweeted a thing about how it's kinda gross how Joe Scarborough is advising Donald Trump, and just today Mika B. did a meeting at Trump Tower. (That happened! She was in there for a meeting with Ivanka Trump, SUPPOSEDLY MAYBE, according to CNN's Dylan Byers, but she responded to that charge on Twitter with a solid "that is wrong. Incorrect information. Again." YA BURNT, DYLAN BYERS! AGAIN!)

Haha, Donald Trump's own book says Joe 'n' Mika have been in his harem for YEARS.

And that is when CNN's Chris Cuomo was like "YUP, ONCE A TRUMP HOOR, ALWAYS A TRUMP HOOR!"

And everybody else was like WHOA, and now this is happening on all the streets of Midtown Manhattan, except in front of Trump Tower, because that block is some shit-trash real estate now, for "reasons":

And Chris Cuomo is doing this right now:

As The Hill points out, there used to be some Taylor Swift/Katy Perry-style Bad Blood between Trump and his little buddies at "Morning Joe," like when they weren't sucking his wing-wang like they are right now. Back when he tweeted things like this:

But these days Joe and Mika live inside cuddle puddles with Donald Trump again, which means they are happy now, and Chris Cuomo is free to read them for filth, like this:

Wonkette apologizes for the high-brow, completely grown-up nature of this post. It's a serious issue, and we didn't want to make light of it.