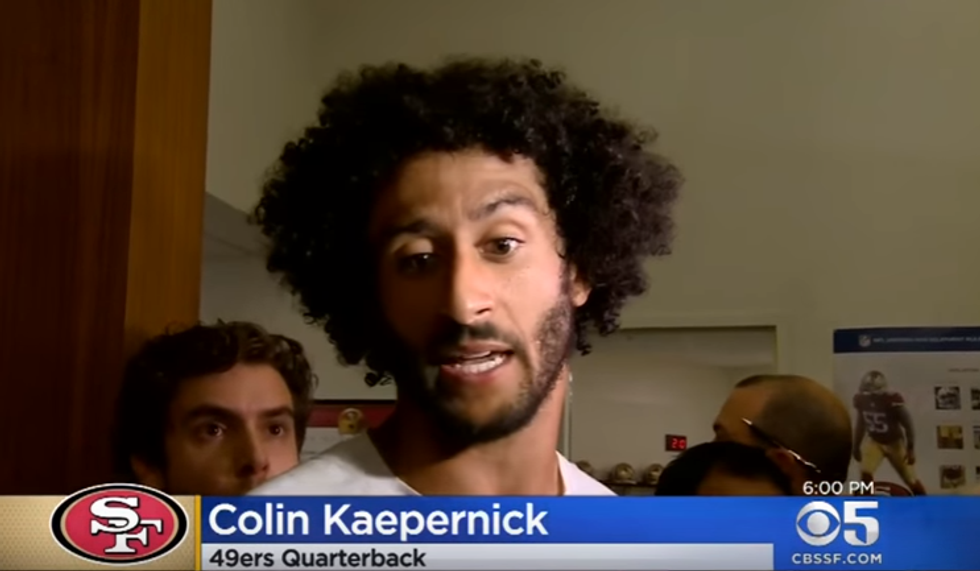 We can't say definitively whether Colin Kaepernick is the Kristi Yamaguchi of quarterbacking, in which case he should definitely have a job by now, regardless of what people think of his national anthem protests, which he did in response to systemic racism in America. We are simply not schooled enough in the dark arts of NFL FOOOBAWWWWWWWW! to expertly decide that on our own. Opinions on the subject run the gamut. Buffalo Bills running back LeSean McCoy says Kaepernick's protests "may have something to do with but I think it also has a lot to do with his play." Matt Barrow, who writes about the San Francisco 49ers for the Sacramento Bee, says depending on how you look at it, Kaepernick was either great last season (a 16:4 touchdown to interception ratio would suggest that!), or it was totally his fault the 49ers sucked so hard last year. Regardless, Barrow says, Kaepernick ended much stronger than he started.

Barrow also says that, despite what you might have heard, the "media circus" surrounding Kaepernick's protests really wasn't all it was made out to be, either on the ground or in the locker room. Most of that, it would seem, is racist caterwauling on Fox News and in internet comments sections.

Back in March, the dorknerds at FiveThirtyEight ran the numbers and compared Kaepernick to other quarterbacks and determined that "Yes, It's Strange That Colin Kaepernick Doesn't Have A Deal Yet." The blog Brick Wall Blitz dives deep into Kaepernick's play and determines that yes, Kaepernick is certainly good enough to start.

Based on that, it seems fucked up that NOBODY has shown any interest, don't you think? If he's good enough that people are actually arguing over how good he is, and if it's true that, as Doktor Zoom points out in the Wonket Secret Chatcave, "mediocre apolitical QBs get jobs all the time," then it would seem that, all things being equal, dude should have a job right now.

Our thesis here is that it's pretty safe to assume Kaepernick's insistence on hurting sad white people's feelings by pointing out that racism is a thing has a LI'L BIT to do with why he doesn't, despite what NFL Commissioner Roger Goodell says. As sports columnist Thomas Lott asks, "Are you sure it's not due to his activism which he isn't backing down from?" (That activism is still going on, by the way, as other players continue Kaepernick's protests in his absence.)

Media Matters put together a video comparing how Fox News treats Kaepernick, versus how Fox News treated the Charlottesville Nazis. It's jarring, watching those assholes talk about how both sides do it and how we should really try to understand the Nazis' feelings, and then pivoting to reporting on Kaepernick as if he's a domestic terrorist.

We wrote about this way back in 2016, because Fox News has been acting like a racist motherfucker toward Kaepernick since those olden days. "Fox & Friends" paste-eating idiot Brian Kilmeade wanted to know why Kaepernick, who was raised by white parents, wasn't acting more like Kilmeade's idea of a #GoodBlackGuy. Tucker Carlson, who is a warrior for the common man, wanted to know why Kaepernick was complaining about racism, when he has all that football player money. Meanwhile, Sean Hannity was yelling incoherent lie words about how Kaepernick is a secret Mooslim.

Also too, back then, Fox News watcher Donald Trump, who was not yet president of America, said Kaepernick should probably go find another country to live in. Ayup.

Even when actual NFL players debunk Fox News's bullshit TO ITS FACE, Fox persists in spreading its narrative about how Colin Kaepernick is some sort of grave threat to white America. For whatever (blindly racist) reason, he just makes Fox News and its white people viewers maaaaaaaaaad.

This week, tons of people have been gathering outside the NFL headquarters to protest how shittily Kaepernick has been treated, and calling for boycotts:

The NAACP has also sent a letter to Roger Goodell, demanding a meeting and expressing its firm belief that Kaepernick is being shut out specifically because he's willing to speak up and cause trouble over ISSUES THAT MATTER.

Well damn. That pretty much says it all, we think.

On top of how Colin Kaepernick is a decent quarterback who it sure seems is being punished for taking a stand (or a knee, as it were), he's an all-around decent guy. Last year, he pledged a million bucks "to organizations working in oppressed communities," and as of now he's made good on $800,000 of that. He's literally giving away all that money, unlike a common Donald Trump, who would make a pledge like that, stick it in his own foundation, then figure out a way to use the cash to buy paintings of himself.

The point is that the way Colin Kaepernick is being treated is fucked up and racist, dude should have a job, and this is worth caring about even if you are not a big FOOOOOBAWWWWWW! fan, which we are not.

Wonkette salaries are fully funded by lovely people like you! If you love us, click below to pay our salaries!