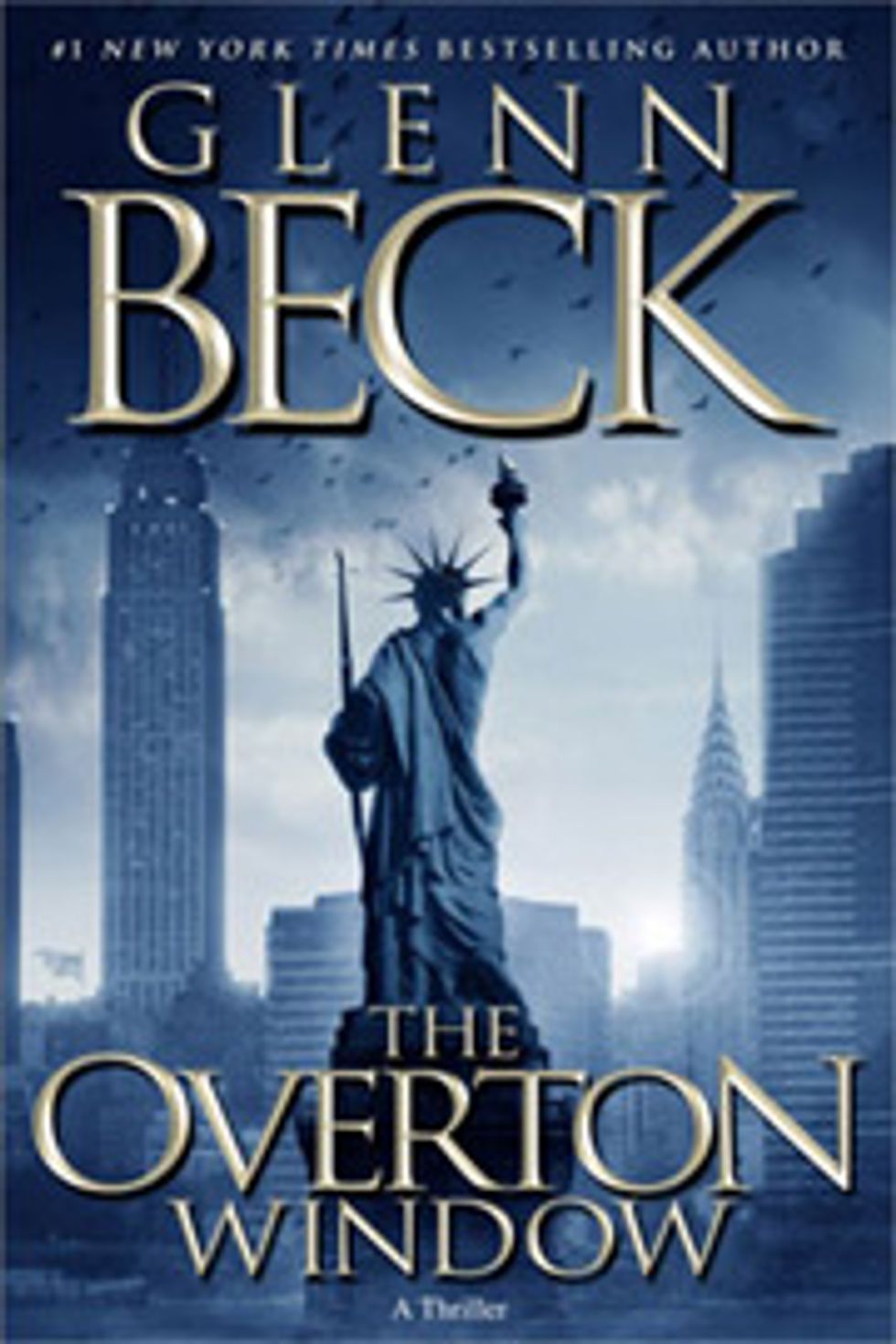 It is summertime, is it not, fellow Wonketeers? And summertime means summer reading: a mystery on the beach, occasional dips into the new Ecco Anthology of International Poetry while you’re on a bus or train to somewhere interesting, or perhaps The Charterhouse of Parma in the shade of a poplar tree. Then again, books and travel are both perilously expensive these days, and neither is particularly American. Not to mention the beach is now smothered by oil-waves and strewn with the inky corpses of pelicans and sea turtles. Maybe it’s better to read something from the Discount stack, something that suits the atmosphere of a foreclosed meth-stained bathtub at 4 o'clock in the afternoon. The debut novel from promising young wordsmith Glenn Beck is just the thing!

As you can see from that terrifying literary trailer, Beck’s first novel is titled The Overton Window, and judging from the name I expected a tale of middle-aged marital angst in a Connecticut suburb. IN FACT, it’s an attempt to breathe new life into the mostly-dead art of the political thriller. So is Glenn Beck the new Graham Greene or Joseph Conrad? Let’s find out, together:

The plot of this thing is hard to summarize, because it’s awfully ... complex? Yeah, let’s say “complex.” There is a hero, Noah Gardner, who works for his father’s PR firm and has “all the bona fide credentials for a killer eHarmony profile.” There’s a brave Teabagger-esque group of rebels called Founders’ Keepers, whose main spokesman is charismatic YouTube presence Danny Bailey, who wears sunglasses at night and -- for all his courage and insight -- is easily duped. There’s Molly Ross, an earnest and idealistic Tea Bagtress who would do anything for the cause.

There are plentiful references to the Bilderberg Group, the Trilateral Commission, the Council on Foreign Relations, and the Club of Rome. There are agents provocateurs from the FBI, a minor nuclear explosion in Las Vegas, repeated references to a despairing Kipling poem, and a romance between Noah and Molly that could be straight out of a teen novel, minus the sex.

My favorite character is Noah’s wealthy father Arthur Gardner, a misanthropic PR billionaire who quotes Saul Alinsky and strives to institute a one world government. Probably the most interesting character in the book, and certainly the most plausible.

The most inspired part of the story is when Danny Bailey recalls the time he dressed up as Colonel Sanders and arranged a “state visit” with the president of the UN General Assembly, forever exposing the hollowness and bankruptcy of international institutions. Because any idiot knows Colonel Sanders had “been dead for almost thirty years at the time.” Ha, stupid foreigners!

So, no worse than Tom Clancy or Dan Brown, and an intriguing mix of political thriller, action-movie-in-waiting, and Colonel Sanders hagiography, with solemn dollops of Paulite/Bagger sermonizing.

Oh yeah, for an actual political thriller, try Kipling’s Kim or Orhan Pamuk’s Snow. Better than Beck, but just as easy to prop up on your bathtub-spanning Freedom Tray.