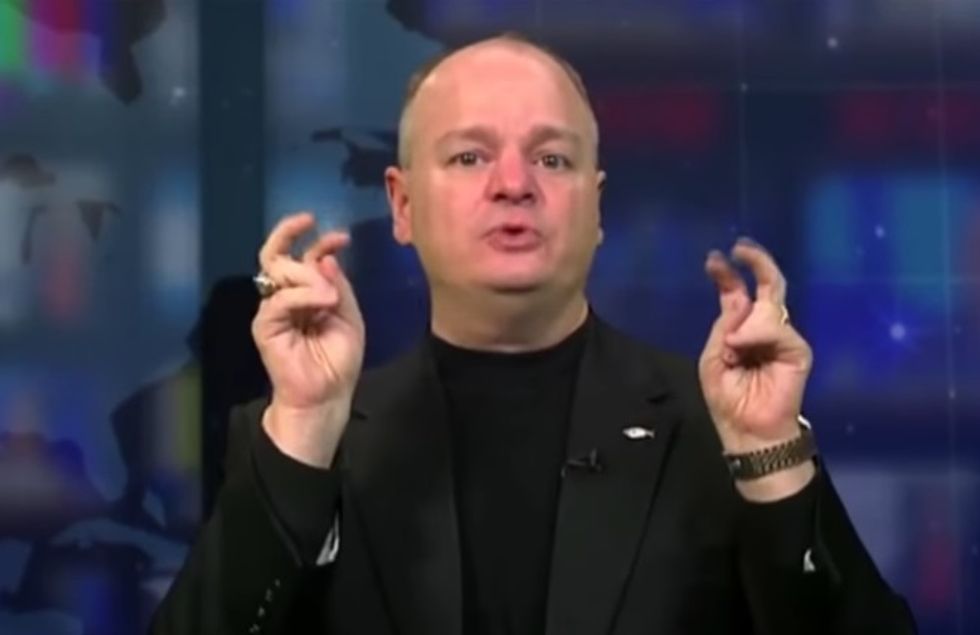 Beloved Colorado wackaloon God-man and soon to be former Colorado state Representative Gordon Klingenschmitt did one of those trippy "Gays are like something I don't like but that is also totally unlike reality" things he's so famous for, this time deciding that gays who insist on getting wedding invitations printed at businesses that are open to the public, just as if they were human beings, are precisely like ISIS extremists who murder gays. Well, yeah, that makes sense, because Gordon Klingenschmitt uses similes like a drunken lemur might wield a TEC-9 loaded with Mike & Ikes.*

On a recent installment of his apostrophe-blaspheming “Pray In Jesus Name” radio show and webcast, Klingenschmitt told the harrowing tale of an oppressed Christian stationery shop in Phoenix that was found to be in violation of a local nondiscrimination ordinance when it refused to print up wedding invitations for a gay couple. After that, he shared a Fox News story about the murder of a gay man in Aleppo, Syria, by ISIS's religious police, known as the "hisbah," which threw the man to his death from a rooftop; a crowd then stoned his dead body.

Klingenschmitt then explained the completely obvious parallels between the two events, which to the non-insane among us might seem disparate indeed:

Klingenschmitt decried as demonic "the Muslim spirit of violence" that motivated the killing, but then pivoted to how America is doing the very same thing, comparing ISIS's "religious police" to the

religious police in Phoenix [who] are going around to the Christians who refuse to print the wedding invitations and they're saying, "Because you're Christian, you're going to go to to jail for six months."** Now how is that any different? We have religious police here in America that are doing the same, on a lesser scale, to the Christians here in America that the Islamic State is doing to the homosexuals in Syria.

Oh! We think we know the difference! We know! If you want to run a business that serves the public, you have to serve everyone in the public! And if your Christian beliefs mean you can't actually do that job, you might want to find another line of business! There is literally nothing in the Bible that says Jesus will send you to hell for printing tacky invitations to anyone's wedding at all, regardless of what those customers do with their dangly bits. Also, "doing the same thing, on a lesser scale," would really be a lot more like pulling away a Christian's chair when they went to sit down, which would still be bad, but at least similar, what with gravity and all. Fining someone for discrimination is really very, very little like murdering someone for being gay because your dumb religion says you should.

In fact, Rev. Klingenschmitt may want to check in with fellow Colorado Springs fundagelical Kevin Swanson, who complains because the politically correct Powers That Be won't let him advocate stoning gays to death in accordance with Leviticus. That sounds a lot more like ISIS than the incident in Phoenix. These guys should really get together and work out who it is God wants dead, and why. And then they should build a time machine and return to the Bronze Age, where they'll be among their own kind.

Klingenschmitt tried to appeal "to the homosexuals out there" and whatever sense of shame they may have left, which we already know is none, asking why those mean old gays won't

treat the Christian couple in Phoenix as if they ought to have religious freedom instead of hiring religious police to metaphorically throw them off a roof? You don’t like it when it’s done to you, so why are you doing it to others?

We'll go way out on a limb here -- a metaphorical one, just so Rev. Klingenschmitt won't get confused and call 911 -- and suggest that when it comes to metaphors, he sucks ass. Metaphorically. What he does literally is none of our business.

Also, as a brief aside, we should note that, depending on how literally they want to take that prohibition on "graven images" thing, the really cautious Christian may want to skip the whole print shop business altogether, but that's neither here nor there.

* Simile credit to Kid Zoom; the initial draft of this post said "an AK-47," but he noted that a lemur would be far more likely to be able to handle the lighter, more compact TEC-9. We feel compelled to note that no lab testing has been performed to confirm either possibility.