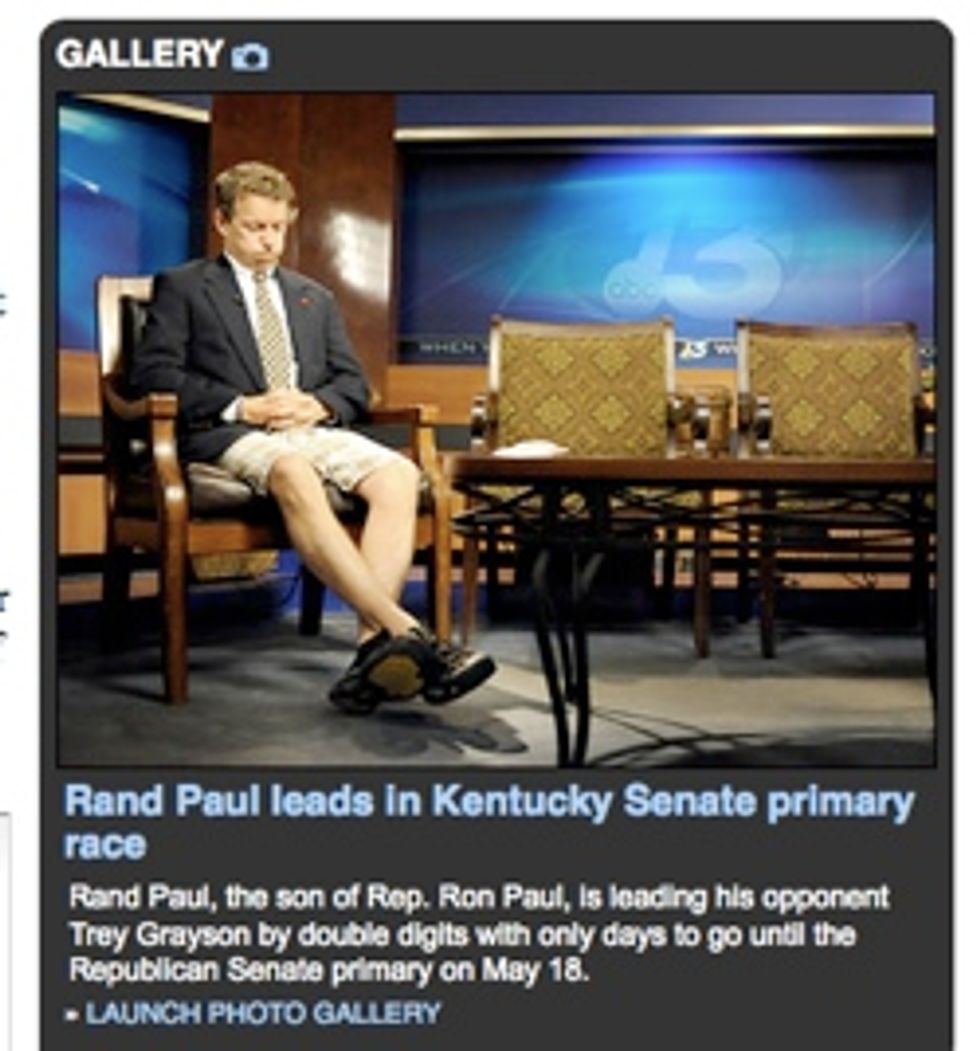 A few months ago, Rand Paul saidsome things that maybe didn't go over so wellvis-a-vis coal miners dying in explosions and black people getting their take-out food from the kitchen entrance. This caused him to go into seclusion, hiding from the press and their "gotcha" questions about policy positions he holds and laws he would attempt to pass if elected. But now he's emerged from his shell, allowing himself to be tailed by a reporter from Details magazine, which, is that still trying to be the gay Esquire? Anyway, Rand Paul is ignorant of his "home" state's history, and also would like the Federal government to stop trying to save the lives of his potential constituents.

You obviously don't have the attention span to read this long article, but here, enjoy this from the opening:

Rand Paul and I are trying to remember why Harlan, Kentucky, might be famous. That's where Paul is driving me, on a coiling back road through the low green mountains of the state's southeastern corner, in his big black GMC Yukon festooned with RON PAUL 2008 and RAND PAUL 2010 stickers. Something about Harlan has lodged itself in my brain the way a shard of barbecue gets stuck in one's teeth, and I've asked Paul for help. "I don't know," he says in an elusive accent that's not quite southern and not quite not-southern. The town of Hazard is nearby, he notes: "It's famous for, like, The Dukes of Hazzard."

"Maybe for some of the coal battles," a young campaign aide in the back seat suggests.

Paul ignores this. "Maybe the feuding," he offers. He mulls this for a moment and says, "The Hatfields and McCoys were more up toward West Virginia, though."

"I think it was the coal battles," the aide says.

Later in the article, the BIG REVEAL is that Harlan County was in fact famous for intense, violent coal battles. There was a documentary about it, which won an Oscar! You might want to Netflix that, Rand.

If you are losing interest at this point, just head on over to The Hill's summary, where you will "learn," in the sense that you will hear again, that Rand Paul loves the totally awesome practice of mountaintop removal, though he thinks it needs a new name because "we're not talking about Mount Everest. We're talking about these little knobby hills that are everywhere out here." Ha ha, they are such tiny mountains, that it doesn't matter when they are dumped into streams! They are so small that they render the local water supply barely undrinkable!

"The bottom line is: I'm not an expert, so don't give me the power in Washington to be making rules," Paul said at a recent campaign stop in response to questions about April's deadly mining explosion in West Virginia. "You live here, and you have to work in the mines. You'd try to make good rules to protect your people here. If you don't, I'm thinking that no one will apply for those jobs."

Yes, absolutely, Dr. Rand Paul, with the labor market being totally free and liquid, and unemployment being virtually nil, the well-informed laborer community will simply refuse to work in unsafe conditions when they could just get jobs as computer programmers or astronauts. Obviously mining companies are falling over each other attempting to woo these skilled coal miners, each one offering more and better in-house safety features than the last. We look forward to non-expert Dr. Rand Paul's further explanation of how the Invisible Hand guides us all to victory, using arguments that have apparently gone unchallenged since he started impressing the dudes with them back in the 12th grade. Maybe now he will get those extra 40,000 Facebook friends, once people finally get their latest issue of Details in the mail. [Details/The Hill/Whas11]