Comey Hearings Just A Bunch Of House Republicans Stepping On Own Dicks. Again. 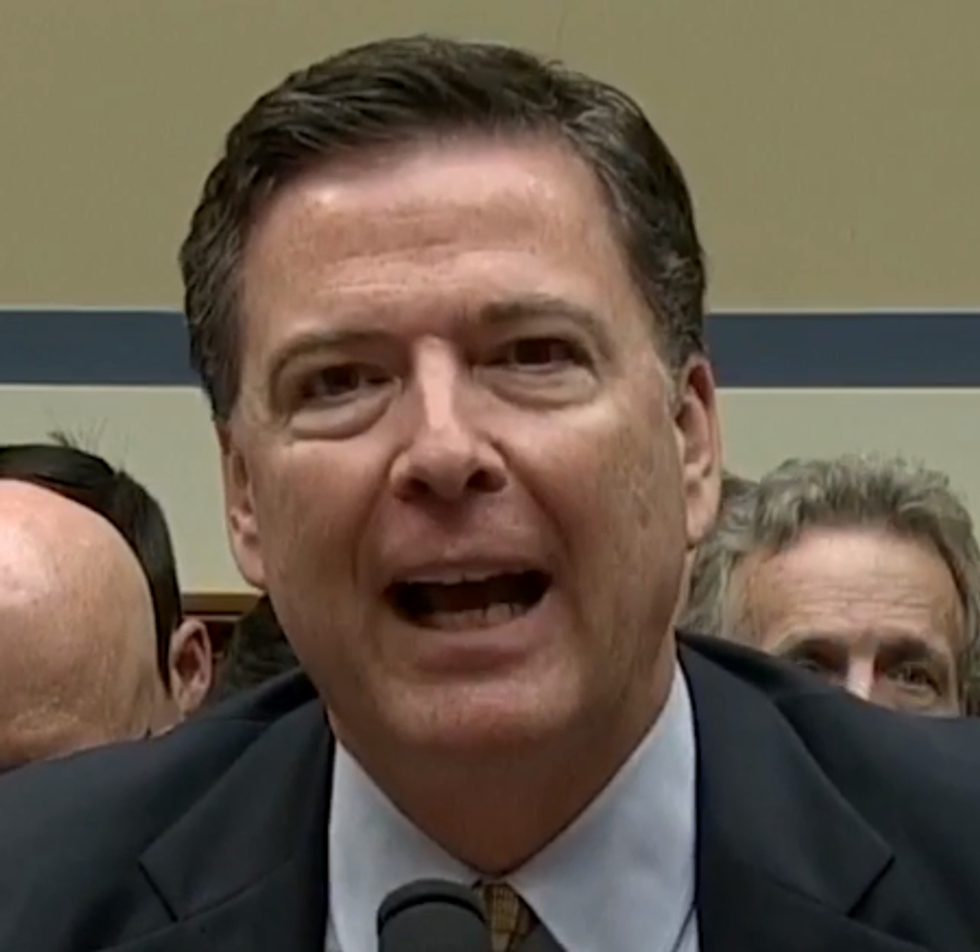 He really had to pee.

Thursday was a wild ride, as House Republicans held a sort of redux of the Benghazi hearings, giving FBI Director James Comey a stern talking-to for not recommending indictment, crucifixion and a burial at sea for known email terrorist Hillary Clinton. Did it change anybody's mind? Hell no. Did it go on for a million thousand hours, with no end in sight? Absolutely, ayup. Let's dive in!

Act 1: The Benghazi Boys are back in town!

The wingnut side of the internet is crowing over Rep. Trey Gowdy's questioning of Comey, which, as Slate puts it, was basically like a LARP-ing demonstration of a Republican campaign commercial. At first glance, the transcriptseems kind of brutal, a rare moment of halfway decent grandstanding from the little thug. He repeated all the times Hillary misspoke or was just plain wrong in public statements she made during the investigation, noting the discrepancies between those statements and what the FBI found. (LIES! LIES! THEY FOUND LIES!)

To paraphrase the dialogue: Hillary said there was nothing marked as "classified," or any other classified information, received or sent on her server; Comey said yup there was. (More on that in a second!) Hillary said she used one device for all her emails; Comey said she used "multiple devices" in her time at State. (For the record, Comey never said whether he meant multiple devices AT ONE TIME, so maybe he and Hillary are both telling the truth!)

[wonkbar]<a href="http://wonkette.com/603699/fbi-refuses-to-imprison-hillary-clinton-for-being-historys-greatest-email-monster"></a>[/wonkbar]Hillary said she returned all her work-related emails to State; Comey said they found some extra shit. (Remember when he said he was actually NOT surprised by that, as things often get deleted and lost when servers are changed and whatnot?)

[wonkbar]<a href="http://wonkette.com/603709/why-hillary-clinton-will-not-rot-in-jail-for-aggravated-emailing-your-ultimate-emails-wonksplainer"></a>[/wonkbar]AND SO ON. Gowdy gave a really good performance! It was like if one of the characters from Deliverance went to college and became a big fancy congressman! He gave a veritable redneck soliloquy about how when HE was a prosecutor, he ain't never heard of no laws where some fuckin' Latin bullshit called mens rea mattered, he just knowed when motherfuckers was GUILTY. He falsely claimed that "thousands" of emails containing classified information were found on Hillary's server, when the actual number was 110 out of 55,000. Maybe he should READ THE REPORT like he wanted us to do with his 800-page Benghazi time-waster.

CHAFFETZ: Did you review the documents where Congressman Jim Jordan asked her specifically [during the Benghazi hearing] and she said, quote, there was nothing marked classified on my emails, either sent or received, end quote?

COMEY: I don't remember reviewing that particular testimony. I'm aware of that being said, though.

CHAFFETZ: Did the FBI investigate her statements under oath on this topic?

COMEY: Not to my knowledge. I don't think there's been a referral from Congress.

CHAFFETZ: Do you need a referral from Congress to investigate her statements under oath?

CHAFFETZ: You'll have one ... in the next few hours.

HUZZAH! In case you wondered what all the Benghazi Boys might spend the first few months of Hillary's presidency doing, they will try and fail to get Hillary convicted of perjury! Stay tuned for Act 2, where we find out that Hillary's "lies" are really not that at all!

Let's take a quick intermission to laugh at these dicksnorkels' hypocrisy, shall we?

Hey remember the time Jason Chaffetz, way back in one of the very first hearings on Benghazi in 2012, helped broadcast the location of one of our secret CIA sites in Libya in a nationally televised hearing?

Remember the time the Department Of Homeland Security had to give Chaffetz a spanking for leaking "sensitive security information" to the press?

[wonkbar]<a href="http://wonkette.com/595080/sad-congressjerk-tasked-with-proving-hillary-did-benghazi-tells-everyone-to-shut-up"></a>[/wonkbar]And remember the time Trey Gowdy, during his Benghazi witch-hunt, accused Hillary of outing a CIA source, but it turned out HE was the one who actually outed that source? HAHA GOOD TIMES.

Act 2: Now what was that about all of Hillary's lies?

Hillary did not lie to the FBI. But these Republicans are saying she sure did lie in other public testimony! Let's see if we can add a little context and perspective, from other parts of the very long hearing.

There were several back-and-forths over whether Hillary was "sophisticated" enough in these matters to understand the classified markings in a very tiny few of her emails. Here's Comey, responding to a question from Republican Rep. Ron DeSantis:

“I just want to take one of your assumptions about ‘sophistication,’” Comey said. “I don’t think our investigation established she was particularly sophisticated with respect to classified information and the levels and treatment.”

“You say the former Secretary of State is not sophisticated enough to understand a classified marking? That’s a huge statement,” said North Carolina Republican Mark Meadows.

“That’s not what I’m saying,” Comey insisted. “I think it’s possible– possible– that she didn’t understand what a ‘c’ meant when she saw it in the body of an e-mail like that.”

Republicans laughed and laughed! If she's not "sophisticated," that means she is dumb and shouldn't be president, right?

Let's see if Democratic Rep. Matt Cartwright of Pennsylvania can clear up something about these classified markings for us:

CARTWRIGHT: You were asked about markings on a few documents, I have the manual here, marking national classified security information. And I don’t think you were given a full chance to talk about those three documents with the little c’s on them. Were they properly documented? Were they properly marked according to the manual?

CARTWRIGHT: According to the manual, if you’re going to classify something, there has to be a header on the document? Right?

CARTWRIGHT: Was there a header on the three documents that we’ve discussed today that had the little 'c' in the text someplace?

COMEY: No. There were three e-mails, the 'c' was in the body, in the text, but there was no header on the email or in the text.

COMEY: That would be a reasonable inference.

WHOA HEY, NOW WE ARE GETTING SOMEWHERE! If they weren't properly marked, then Unsophisticated Hillary might not have noticed at all, which means maybe she wasn't being a big dirty liar all those times!

To clarify this even MORE, let's look at Comey's interaction with Rep. Thomas Massie (R-KY), where we learn that a lot of the (very tiny number of) emails that contained classified info or (incorrect) markings started far below Hillary's desk:

MASSIE: You've basically related to us that this information, this top secret or classified information got into these email chains because of conversations people were having. They were relating what they heard before in other settings. Is that correct?

COMEY: No. Maybe in some cases, but it was people having an email conversation about a classified subject.

COMEY: A lot of what ended up on Secretary Clinton's server was stuff that had been forwarded up the chain. It gets to her from her stack, a lot of that, forwarding. And, then she comments sometimes on it. Someone down in the chain, in typing a paragraph that summarized something put a portion marking "C", "paren", "C", "paren", on that paragraph.

HUH! Improperly (and mistakenly!) marked, way down the email chain, a tiny unnoticed "c" here and there -- what a monster Hillary is!

Epilogue: Let's take a trip to the Land Of Make Believe!

Imagine you are Hillary Clinton during her time at State. Can you see yourself? Are you wearing a pantsuit in your mind's eye? You are on the phone with some foreign dignitary, kicking him/her in the nads. You get a quick email from Huma Abedin, your  adviser, asking for a comment or brief direction on some Issue Of The Day. The email that started the chain has been through 58 hands at the State Department, before finally reaching the secretary's desk. Person number 23 included a piece of possibly classified information, so she wrote a little "(c)" on it.

[wonkbar]<a href="http://wonkette.com/593530/clinton-email-bombshell-john-boehner-probably-blackout-drunk-right-now"></a>[/wonkbar]You fire off a response to Huma that says, "Yes, and where are we on the gefilte fish?" You do not fully read the entire email chain, because you have more ass to kick and YOU AIN'T GOT TIME.

There. You, Hillary Clinton, have now destroyed America, by letting a tiny piece of possibly classified information cross your server.

None of the 110 emails -- NONE OF THEM, as per FBI Director Comey -- had headers saying "Achtung! Classified!" If they had, you would have noticed! According to Comey's testimony, there were only THREE emails that actually had that little "(c)" bore marking thing. THREE EMAILS. And the "(c)" on all three was placed there mistakenly.

Does it sound like the State Department is kind of sloppy as fuck with this kinda stuff? Ayup, it sure does. And it's a known fact that our system of classification is alsosloppy as fuck. Hell, agencies can't even agree on what should be classified in the first place.

But good God, people, cool it with the shit about Hillary's "lies." All you're doing at this point is sucking Trey Gowdy's pencil dick, and you wouldn't want to get that thing stuck between a little gap in your teeth, now would you? SPIT IT OUT, AMERICA.