Comment Of The Week: Get Ready For Your #DadPun, America! 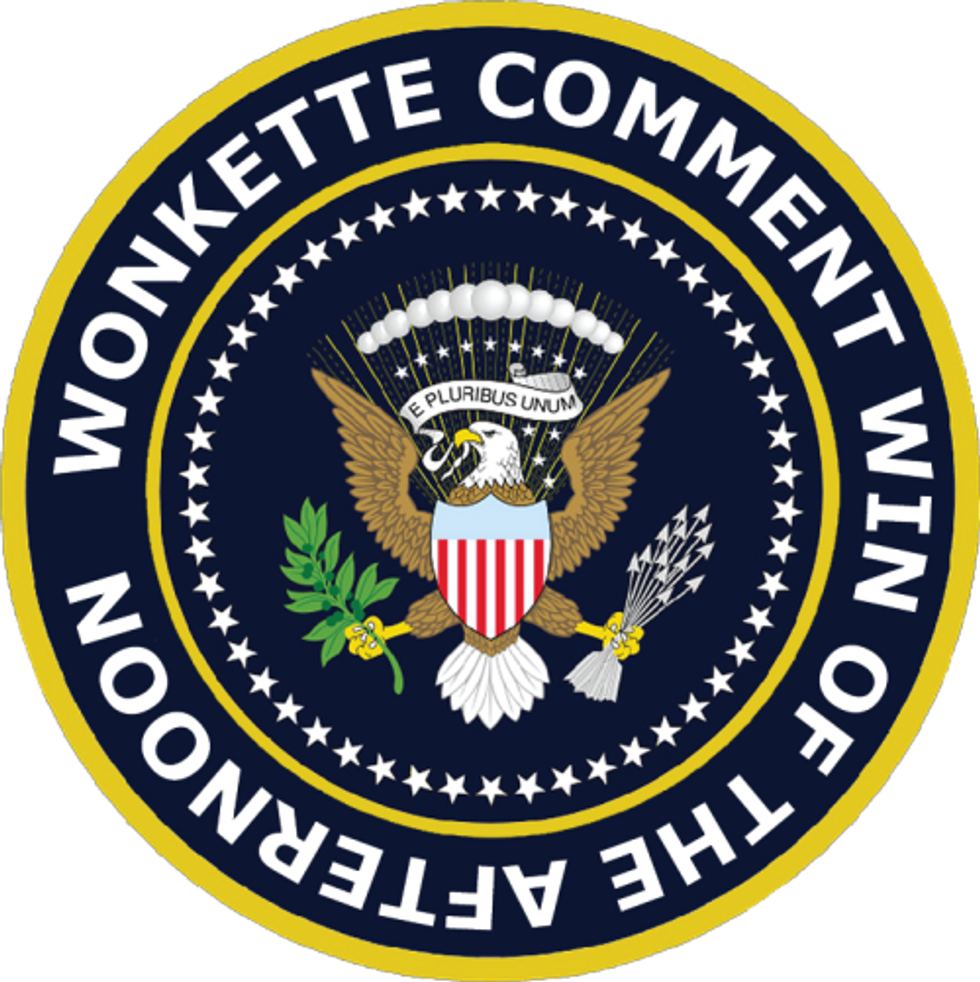 You guys have any submissions for a new COTW logo?

It's Friday, so you know what that means! Bashing out a hurried Comment of the Week post and not even porfraeding it! We had lots and lots of wonderful comments this week, as we do every week, because our readers are THE BEST, not to mention so smart that they would never ever fall for anything so cheesy as empty compliments. So let us get right to the excitement!

Our Second Runner-Up, which wins nothing but bragging rights, comes from alert Wonkette Operative Apple Scruff in reply to Saturday's piece on Elizabeth Warren schooling Donald Trump all over the Twitter machine:

So the entire Democratic party just needs to Tweet mean things about Trump for the next 6 months. Since he just can't resist a Twitter war, he'd be too busy Tweeting back, he'd never leave his office.

Did you hug your mom on Mother's Day and thank her for loving penis so much? WHY NOT, YOU UNGRATEFUL BASTARD?

Our First Runner-Up, which also wins nothing -- only it's a much nicer, high-quality nothing -- came in reply to Monday's story about the crazy Monster Drink lady and her joyous celebration of Mother's Day with this sign:

Most people whizzing by:

London Has A New Muslim Mayor, And The Stupidest Man On The Internet Is ON IT!

The Stupides Man On the Internet, Jim Hoft, found undeniable proof of Muslim treachery. Pity it was 100% fake.

And our actual Comment of the Week, winner of some random Wonkette-branded merch to be chosen at the whim of Yr Editrix, goes to alert Wonkette Operative Shibusa, in a discussion of the Stupidest Man On the Internet, Jim Hoft, and his now-deleted panic over the tricksy Muslim Mayor of London, whose wife wore western clothes during the campaign, but supposedly was forced back into a hijab once the election was over (in reality, it never happened -- Hoft saw a picture of another lady entirely). Shibusa won our #DadJoke heart with this simple observation:

That's how we like 'em. Corny and groany. (Next week, of course, we'll be giving the prize to some erudite comment referencing postmodern literary theory. Or a really grody dick joke.)

All the rest of you get participation medals, which you will have to make yourself by cutting out this simple pattern from your computer monitor or mobile device screen:

Now beat it, and stop filling up the post with music videos, they break Wonkette. Seriously, you people. You think you're DJ's or something?