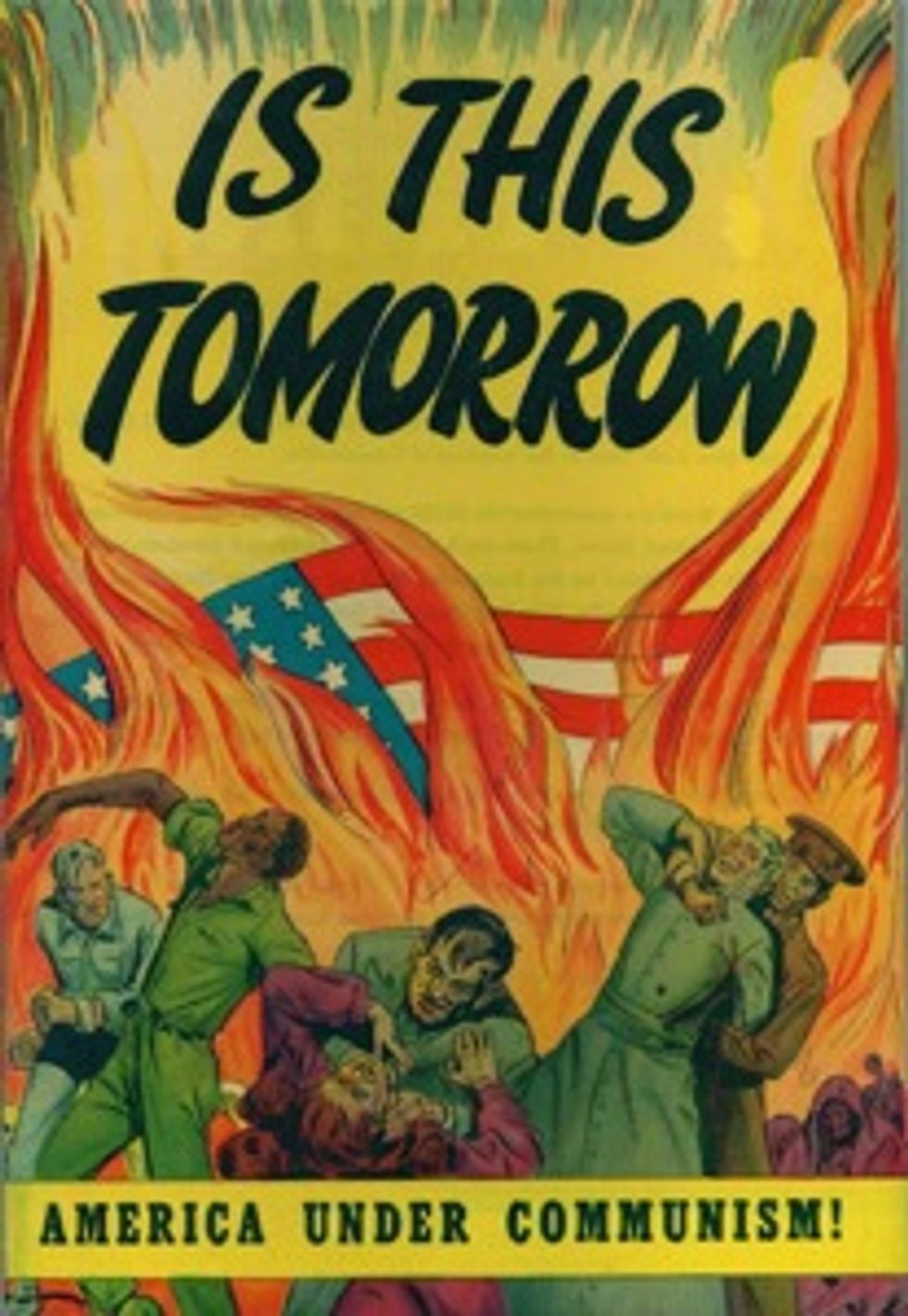 A wingnut jesus-freak lady from our favorite online newspaper,World Net Daily, would like to share something with you -- something she withheld from the American Public throughout the presidential campaign, even though she knew it was true, because she got some forwarded email saying it was true: At a business dinner in 1992, some Russian capitalist's wife said the Communists had picked a new American president, a black guy from Hawaii/Africa named Barack!

Exactly 17 years later, guess who we have as president? THAT ONE.

What prompted this anti-American wingnut lady to finally reveal this awful International Communist conspiracy, now that it's too late? Uh, she saw the cover of Newsweek, which makes the uncontroversial observation that the United States is finally beginning to move towards a European-style wealthy government with expansive social services. You know, like Labour or Social Democrats ... Socialism.

Confronted by this Newsweek cover, the wingnut lady finally broke down and Ctrl-V'd this incredible tale from her Hotmail.

"Yes, it is true. This is not some idle talk. He is already born, and he is educated and being groomed to be president right now. You will be impressed to know that he has gone to the best schools of presidents. He is what you call 'Ivy League.' You don't believe me, but he is real and I even know his name. His name is Barack. His mother is white and American and his father is black from Africa. That's right, a chocolate baby! And he's going to be your president."

She became more and more smug as she presented her stream of detailed knowledge and predictions so matter-of-factly – as though all were foregone conclusions. "It's all been thought out. His father is not an American black, so he won't have that social slave stigma. He is intelligent and he is half white and has been raised from the cradle to be an atheist and a Communist. He's gone to the finest schools. He is being guided every step of the way and he will be irresistible to America."

We sat there not knowing what to say. She was obviously very happy that the Communists were doing this and that it would somehow be a thumbing of their collective noses at America: They would give us a black president and he'd be a Communist to boot. She made it quite obvious that she thought that this was going to breathe new life into world Communism. From this and other conversations with her, she always asserted that Communism was far from dead.

She was full of little details about him that she was eager to relate. I thought that maybe she was trying to show off that this truly was a real person and not just hot air.

She rattled off a complete litany. He was from Hawaii. He went to school in California. He lived in Chicago. He was soon to be elected to the Legislature. "Have no doubt: he is one of us, a Soviet."

At one point, she related some sort of San Francisco connection, but I didn't understand what the point was and don't recall much about that. I was just left with the notion that she considered the city to be some sort of a center for their activity here.

Well, duh, San Francisco? GAY GAY GAY GAY HOMOSEXUAL, that's the "San Francisco connection." And the "activity" is called "men's dicks in men's butts, and ladies' hoohaas on the other ladies' hoohaas," and the "Stimulus" bill is all about TEACHING CHILDREN how to put what where, in the butt, starting at age Six, right after Satanism Service and memorizing Mao's Little Red Book, in Russian.

Oh guess what else, lady? Your beloved Jesus was the worst socialist of all! The only thing he loved more than socialism was hookers and high taxes. "Render unto Caesar," indeed! He must be rolling in his grave, listening to you False Christians shit on the Christian Theology. Cultural Revolution, NOW! WORKERS OF THE WORLD UNITE! VIVA CHE YOU FUCKS.

Communism scheduled for a vote in Senate [World Net Daily]