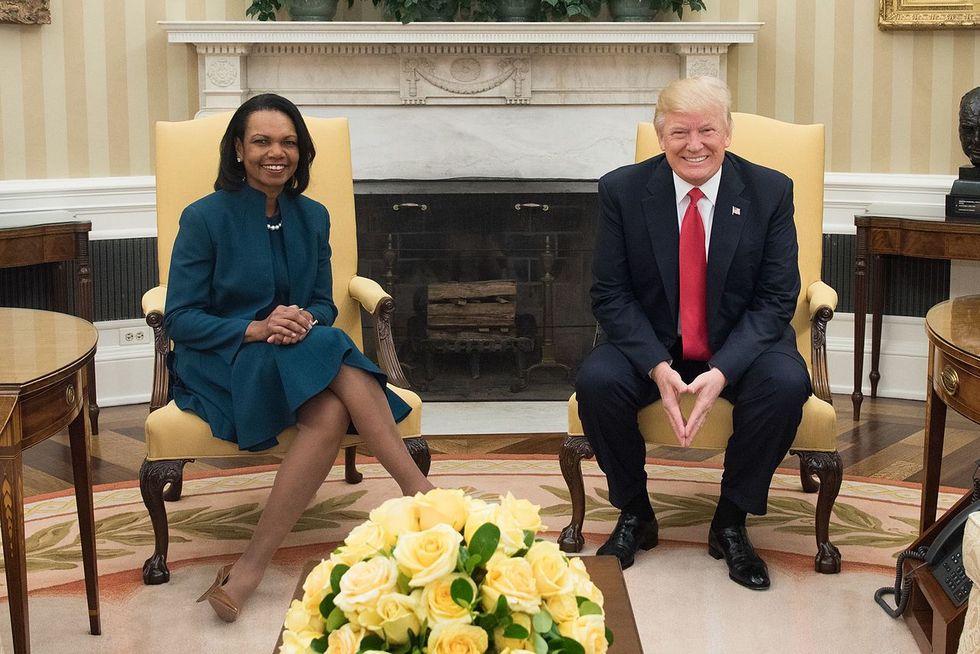 Let's play a game. Let's pretend that you are an African-American woman, a high-achieving woman respected by her party, and from the state of Alabama. Let's pretend that when you were eight-years old, your friend was one of four young girls around your own age murdered in a church bombing perpetrated by the Ku Klux Klan.

Now let's say people are asking for your opinion on whether they ought to vote for the man who prosecuted those KKK members who murdered your childhood friend, or an accused child molester who thinks things were real swell for America when slavery was legal, and isn't all too sure that any constitutional amendments after the 10th (like the ones that outlawed slavery and gave you the right to vote) are really all that necessary.

Is this a hard decision for you? Does this strike you as a good time to be particularly wishy-washy? Well, if it is and if it does, you just might be Condoleeza Rice.

Rather than coming out and endorsing Jones (who, again, sent the people who murdered her friend to prison), AL.com reports that Rice said:

"This week's special election will be one of the most significant in Alabama's history. As a native daughter, I remain - at heart - an Alabaman who loves our state and its devotion to faith, family, and country," Rice stated.

"I encourage you to take a stand for our core principles and for what is right. These critical times require us to come together to reject bigotry, sexism, and intolerance.

"It is imperative for Americans to remain focused on our priorities and not give way to side shows and antics. I know that Alabamans need an independent voice in Washington. But we must also insist that our representatives are dignified, decent, and respectful of the values we hold dear.

"Please exercise your right to vote - a privilege won by the sacrifices of our ancestors. Sustain the central ideals and values that make our country a beacon for freedom and justice for the sake of Alabama and for the good of the United States of America."

DOUG JONES, CONDI, SAY DOUG JONES. It is not hard! It is two whole syllables! You can do it! You all but said "Hey, don't vote for the racist, sexist bigot" -- by which you very clearly meant "Hey, don't vote for Roy Moore, the candidate in this race who is a racist, sexist bigot" -- but for some reason you couldn't bring the words out of your mouth to state it frankly. That is some weak tea, Condi.

This guy helped write a book that said women were not fit for public office. He has said that the last time America was great when we had slavery. At the very least, could you know when you have been insulted?

This is not the time for subtlety. It is not the time for partisanship. It is not the time for fear. What are they gonna do to you, Condi? Do you have future political plans that you fear could be hindered by coming out a little too strongly against a guy who got banned from the mall for trawling for teenage girls? What are you afraid of, Condi Rice? Aren't you a little old to be this afraid to take a stand on a choice this obvious? Shouldn't you be at the "out of fucks" stage of life at this point? Because I'm a lot younger than you are, and I hit it years ago.

Wonkette will always take a firm stand against child molesters who think slavery wasn't so bad! So please click here and give us some money!