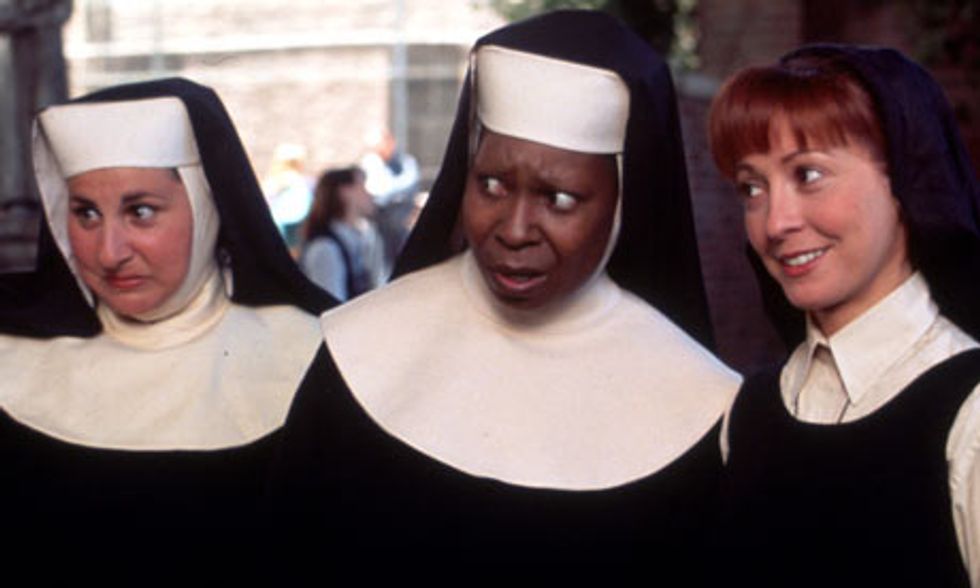 Here at Wonkette, you know welove us some nuns because they are basically big commies like our damn selves. We also like nuns because they seem to get certain varieties of Congresscritters really really riled up, what with their fancy ideas about how Jesus loved poor people and thought they mebbe shouldn't just die in ditches. The latest Congresscritter to yell at nuns is the illustrious Reid Ribble (NO THAT IS REALLY HIS NAME) of Wisconsin, who thinks that he is rubber and the nuns are glue and nyah nyah the Church should really step up their game at the clothing and feeding:

First, what terrible commie things did the nuns have to say about how gubmint should pay for everything while the Church just rolls around in a pile of money?

During a House Budget Committee hearing Wednesday, Sister Simone Campbell, a Catholic nun and executive director of NETWORK, a Catholic social justice lobby, testified to lawmakers about the effectiveness of government subsidized welfare programs and public-private partnerships with faith-based charities.

Hrmm...that sounds more like the commie nun was saying that when government and charities work together, they can help the poor people be not dying and such. Congresscritters do not have the attention span nor cognitive ability to understand that, though:

Instead of focusing on how the government can assist the millions of Americans who struggle to put food on the table, Rep. Reid Ribble (R-WI) indicted Campbell and the Catholic Church for not doing enough to fix poverty on their own, asking, “What is the church doing wrong that they have to come to the government to get so much help?”

Take that, nuns! If you ignore Catholic Charities and and all the donating and social justice-ing, you are totally right that the Church doesn't do anything to partner with government programs to get resources to the poors. You're a goddamn genius Reid Ribble, dude with the name like the sounds the Hamburgler makes.

Never fear. Our hero nuns had the last word:

Campbell shot back, “Justice comes before charity… Everyone has a right to eat, and therefore there is a governmental responsibility to ensure everyone’s capacity to eat. Love and care makes a difference, but the issues are so big there isn’t sufficient charitable dollars there.”

Nuns, did we mention we love you? We love you.