Congressjerk Steve King Warns We Must Brace For Endless Civil War, Thanks SCOTUS 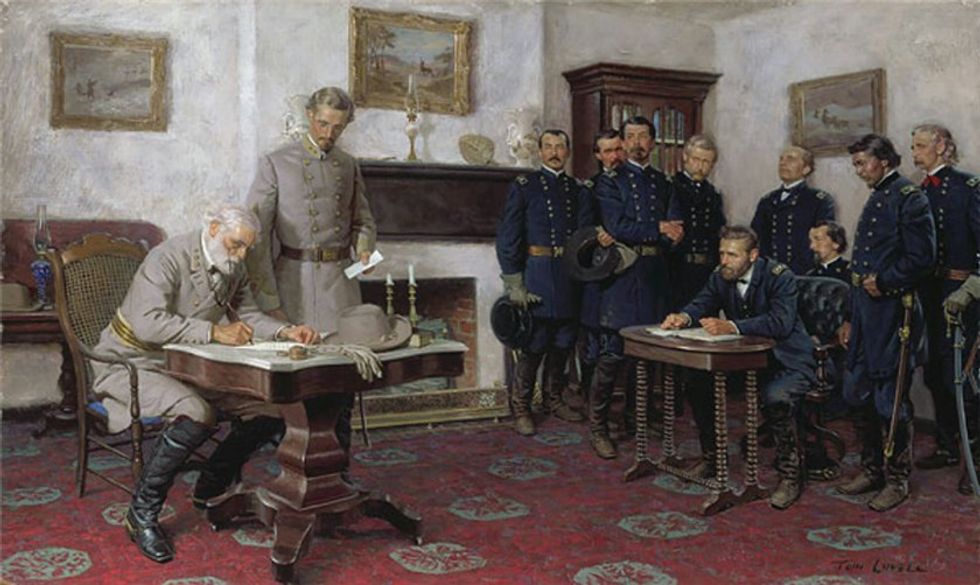 Bad news, guys. We're about to kick off another civil war, according to Iowa Rep. Steve King, who is definitely not A Idiot. What with the Supreme Court poised to force King and all his close personal hetero-friends to suck on gay penises and put rings on them while Jesus weeps in the corner, even the most casual student of U.S. America history can tell you this is exactly how that other Civil War got started:

Dred Scott, back in 1857, the Court thought they were going to solve the slavery question by telling Congress that they couldn't free the slaves and telling the country that slaves could never be citizens. They made that decision and that helped move us towards a civil war. It wasn't the only reason, but it was a big reason.

Let us interrupt this riveting history lesson to remind you, dear readers, that King is also working on a fix to the Fourteenth Amendment because guaranteeing full citizenship to anyone born in America is a real dumb idea, and also not very American. (Neither is trying to amend the Constitution with a legislative tweak instead of a constitutional amendment, but whatever. Details.) We might have waged a war on ourselves to determine whether blacks are people too, but King knows for damn sure browns are NOT. We can neither confirm nor deny that King will then get to fixing the Thirteenth Amendment, and the Nineteenth, and so on.

ANYWAY. The point is, the country almost destroyed itself over a Supreme Court ruling (sort of), so logic dictates that will happen again, if the Court tries to turn everyone gay:

If all of that, to eliminate slavery -- do they really think that they can do what they're gonna do to marriage, with one decision of the Supreme Court, and society is going to accept that? I think we're in for a long battle.

Sweet! More war, right here at home so we don't even have to get on a plane to do it. King and his confederate brethren will make their own country, print their own heterobucks, and fight the war of homo aggression -- for a century, if they must -- to oppose any Supreme Court ruling that declares every person in America is, like, an actual person in America, with the same rights as other persons in America. Got it.

And when you put it that way, it makes sense that the justices should just leave well enough alone, to spare us all the death and destruction and "trauma":

An endless trauma in a similar way that Roe v. Wade did, and the constant marches. The public will not accept a huge decision of a Supreme Court that's not a decision of the people.

Terrific. We look forward to the same schmucks who wave around posters of dead babies marching in the streets with pictures of gay couples fighting about whose turn it is to unload the dishwasher, because the Supreme Court might (will, for sure) issue a ruling that a majority of The People are absolutely fine with anyway.

You know we were kidding before about Steve King not being A Idiot, right? Right, of course you got that.