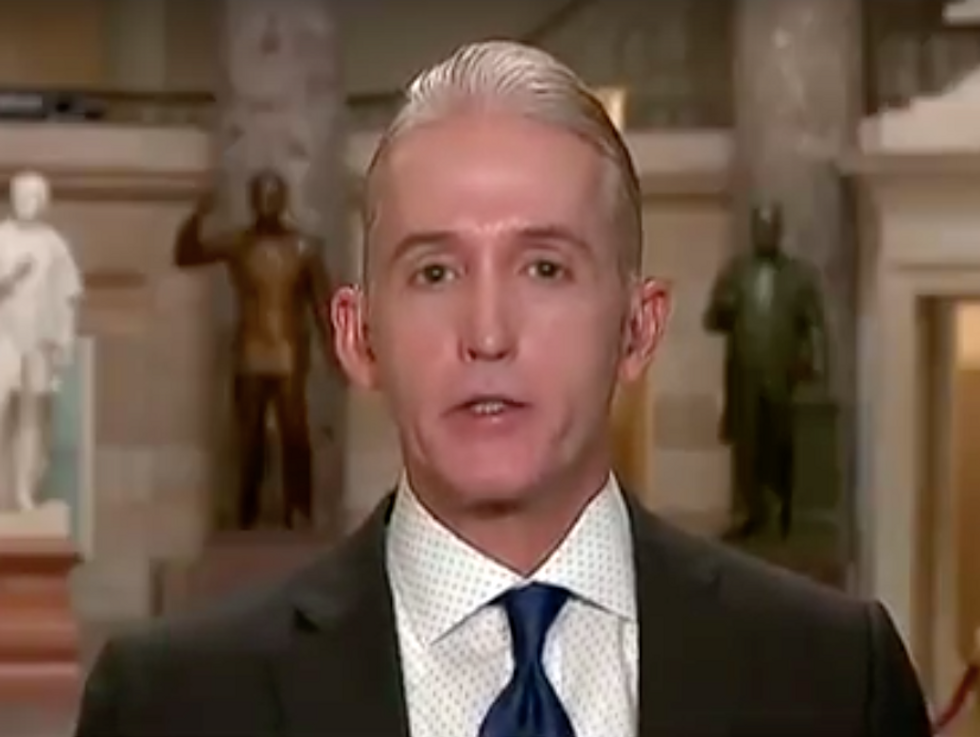 We see you trying to reinvent yourself on the way out the door, Trey Gowdy, and we are not having it. Yesterday Gowdy described himself to Face the Nation's Margaret Brennan as "a lousy politician" because -- we shit you not -- HE'S NOT PARTISAN ENOUGH.

I see multiple sides of a single issue. And the fact that someone disagrees with me, does not make me challenge their love of the country. It doesn't make me believe that they're corrupt. I've got a lot of friends on the other side of the aisle. We disagree on this issue, but -- but I don't question their love for the country and I don't -- I -- I just -- I don't think the end justifies the means.

Yes, if the guy who led eleventy-thousand hours of Benghazi hearings has a fault, it's that he's too evenhanded and unwilling to impugn someone's patriotism for political advantage.

But why would the South Carolina congressman be so worried about his reputation this week? Might it have something to do with that memo that came out the of House Intelligence Committee? Is Gowdy worried about blowback from that piece of shit mash note that got debunked by everyone but Sean Hannity within two hours?

See, only two members of the committee were allowed to see the FISA warrant at the FBI -- Trey Gowdy and Adam Schiff. As Schiff pointed out, Republicans voted against allowing the entire committee to view the classified data. So whatever version of the story appeared in the Republicans' memo, it came directly from Trey Gowdy himself.

All the bullshit lies in that memo can be traced directly back to good old bipartisan Trey Gowdy. And there are some whoppers! Like when they said the FISA warrants on Carter Page were BIASSSSS because the #RIGGED FBI didn't disclose that the Dodgy Dossier on was paid for by Democrats.

Neither the initial application in October 2016, nor any of the renewals, disclose or reference the role of the DNC, Clinton campaign, or any party/campaign in funding Steele's efforts, even though the political origins of the Steele Dossier were then known to senior DOJ and FBI officials.

This would likely be irrelevant even if it were true, which it isn't. As WaPo, the NYTimes, and the WSJ reported just hours after the memo was released, the warrant application made clear that the source was a political opponent. Per WaPo,

The Justice Department made “ample disclosure of relevant, material facts” to the court that revealed “the research was being paid for by a political entity,” said one official, who spoke on the condition of anonymity because of the matter’s sensitivity.

“No thinking person who read any of these applications would come to any other conclusion but that” the work was being undertaken “at the behest of people with a partisan aim and that it was being done in opposition to Trump,” the official said.

Gosh! Who could have drafted language precise enough to accuse the FBI of leaving out CLINTON CASH DNC, without admitting the mention of Trump's political opponents?

Oh, right! Has to be the only guy who actually saw the underlying FISA warrant! Care to comment, Congressman?

They could have easily said it was the DNC and -- and Hillary Clinton. That would have been really easy. I read the footnote. I -- I know exactly what the footnote says. It took longer to explain it the way they did, than if they just come right out and said, "Hillary Clinton for America and DNC paid for it." But they didn't do that.

Oh, so it was there after all! But it was in a footnote, so it doesn't count. Is that what we're going with here? Okay, then!

Lucky break for Congressman Gowdy that Trump's Best Little Errand Boy Devin Nunes was so hot to label it The Nunes Memo! Otherwise reporters might be calling that unpolished turd The Gowdy Memo, which would make more sense considering Gowdy was the source for every single piece of classified information in there.

But watch out, Congressman! The House may vote this week to #ReleaseTheOtherMemo. Maybe Adam Schiff will go easy on you and not call you out personally for all the lies in your version. You know, since you're such decent guy with friends on both sides of the aisle. Good thing you didn't spend the past decade harassing Democrats or anything, right?

And a big mazel tov on your retirement Congressman Gowdy!

There is a time to come and a time to go. This is the right time, for me, to leave politics and return to the justice system. Full statement here → pic.twitter.com/7I8AApqvs1

Which you announced Wednesday. The very day the House voted to release "Devin Nunes's" Memo. By total coincidence, we are sure!

Please money us! We just watched a video of Trey Gowdy talking for like 20 minutes!