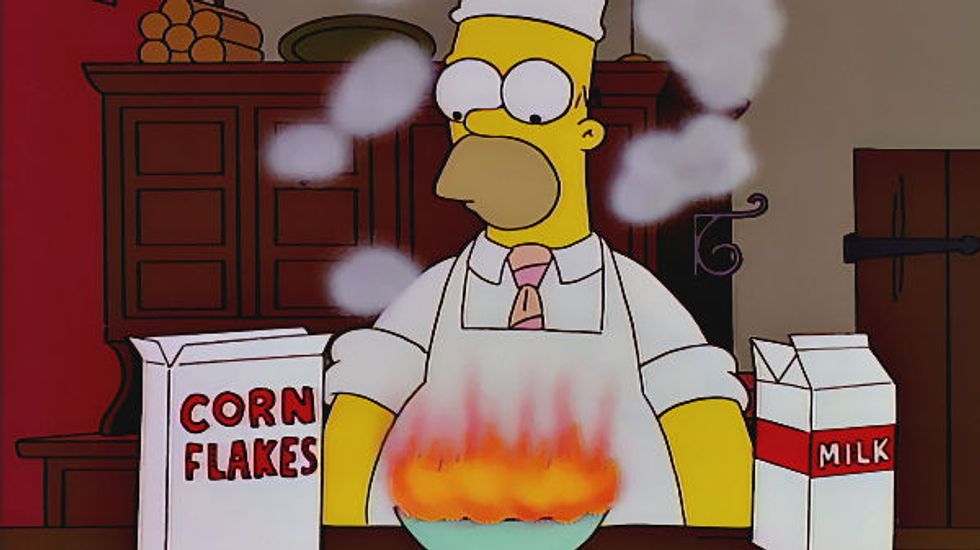 This Week in #Brands: The Swill of the People

All 12-ounce cans and bottles of Budweiser will feature the word "America" on their labels, instead of Budweiser, in the brand's distinctive cursive font.

The temporary label swap, which starts on May 23 and will go through the presidential election in November, is meant "to inspire drinkers to celebrate America and Budweiser's shared values of freedom and authenticity."

Goddammit, America. Did you guys check with Michigan CEO Rick Snyder? What better name could be used to market the Totally Safe! Flint water the state could bottle and sell to replace its poison pipes and poison schools.

But it looks like Budweiser stuck its flag in the Land of Labels and claimed this brand for Budweiser drinkers everywhere. Now whenever you shotgun a Bud and smash the empty can on your forehead, John Ashcroft pops up from under a floorboard to sing "Let the Eagle Soar," followed by an F-15 flyover. This summer is gonna suck.

On cue, Don Trump made a hilarious joke about Budweiser getting in on the ground floor of his upcoming American Greatness movement as he angles for the all-important designation of "Candidate You Most Want To Have a Glass of America With." Because who doesn't want to drink with a thin-skinned, small-handed "billionaire" who makes weird comments about his "hot" daughter?

InBev stepson Miller is not reportedly toying with changing its name to "AR-15," while notably awful Corporate Person Coors might be rolling out a small batch of "Ayn's Night Sweats" in the near future.

Recall Alert! Did you buy your kid's shoes at Payless? Don't be ashamed, just read this

Speaking of products that should be named "America," Payless Shoes pulled its kids' "light up" shoes from the shelves after a Texas family alleged one of its kid's shoes caught on fire.

Jovan Virag told Houston's KHOU that he believes his 2-year-old's favorite "Jake and the Never Land Pirates" light-up shoes caused the backseat of their car to catch fire Friday after they were left there overnight. The parents said they didn't discover the charred backseat until the next morning.

Hey, no big deal. The boy can be Prince of pre-K if he harnesses the power of his spontaneously combustible clothing.

Payless says the recall is merely precautionary and its cheap clothing combined with cheap circuitry is probably right as rain. (Note: use Payless products in rain at own peril.)

Google infringing on predatory lenders' right to advertise with Google

How about a Corporate Person who won't sell all of its very wealthy soul? This week, Google announced it would no longer allow shitbird payday lenders to advertise on its site as if usury should be outlawed like it's the Old Testament or something.

Payday loans prey on poor people, military members, people of color, Kansans, and the otherwise desperate. That's exactly what they're designed to do because if you're wealthy or a chosen corporate person you'll have access to low interest or basically free American capital.

Facebook already bans these ads while Google currently bans ads for things like drugs and dynamite because they're lame and have the right to do so. But the Payday Lobby is going to rabble about Corporate People exercising autonomous rights to accept ad money from lenders accelerating some Americans' descent into unrecoverable debt.

“Facebook and others are making a blanket assessment about the payday lending industry rather than discerning the good actors from the bad actors,” the Community Financial Services Association of America, a payday lending trade group, said in a statement. “This is unfair towards those that are legal, licensed lenders.”