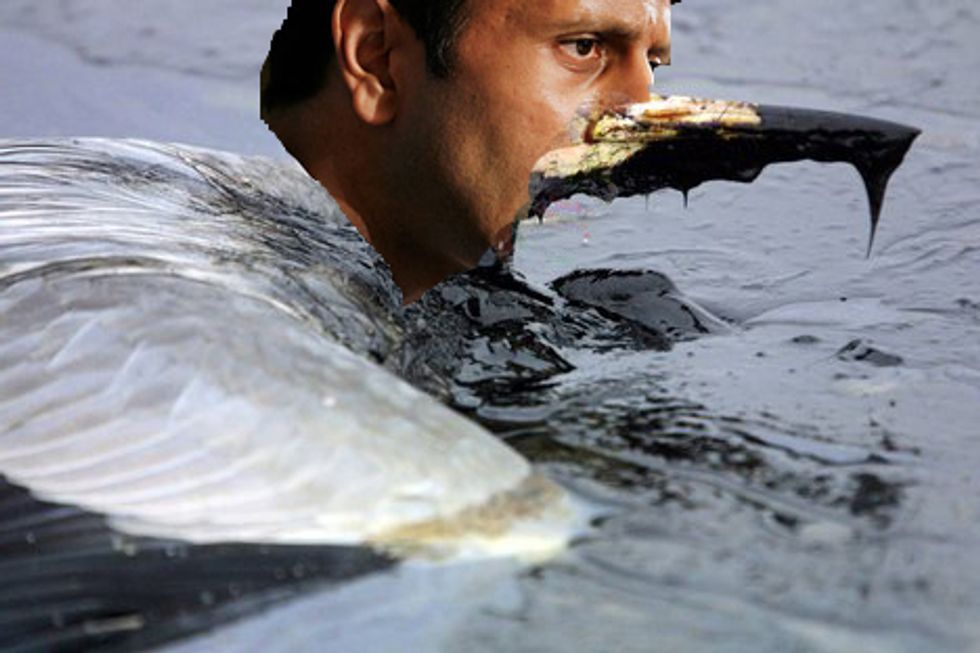 Bobby Jindal is not just a governor looking to run against Obama for president: He also happens to be a beautiful aquatic bird who waspersonally coated in oil by the Evil President while trying only to help the people of Louisiana. And so little Jindal has written a book about himself, to inform America that he is nicer and pragmatic-er and caring-about-people-er than this Obama fellow, who apparently evilly discussed POLITICS with Jindal when there was a bunch of oil in the water. Also in the book: Jindal overheard Rahm Emanuel use a swear word when he was talking on a cellular telephonic device! Rahm Emanuel. These hott deets that Jindal puts at the front of his book will surely make America want to run its fingers through his feathers forever.

And after Obama instituted a moratorium on offshore drilling, Jindal recounts that the president dismissed his concerns about the economic impact of the ban.

“I understand you need to say all of this, I know you need to say this, that you are facing political pressure,” Jindal quotes Obama telling him. When the governor said he was concerned about people losing their jobs, he said the president cited national polls showing that people supported the ban.

“The human element seemed invisible to the White House,” he writes.

All of the South is currently fanning itself wildly, offended that a president would acknowledge that he and a state's governor have different constituencies with clashing opinions on a political issue. "Why I never!" squacked Jindal, probably, in his head, as that guy was certainly intimidated by Obama -- let's be honest. Louisiana humans who wanted jobs are more human than America-as-a-whole's humans, who didn't want their country's coastal environments and economies destroyed everywhere by some high-risk resource collecting.

Jindal also writes about former members of Congress becoming lame lobbyists who act like "aging high school football players recalling their glory days on the field" in talking with current members, which is pretty true! That stuff is corrupt and sad! Jindal then backs down when presented with the names of representatives who might be doing just that, so, you know, he's cool on that. However:

Conservatives, he writes, “need to do more than simply shout ‘Drill, baby, drill’ — we need to aggressively pursue the next generation of renewable and clean energy production technologies.”