Corporate Overlords Want To Replace You With Robots, Still Good With Child Labor 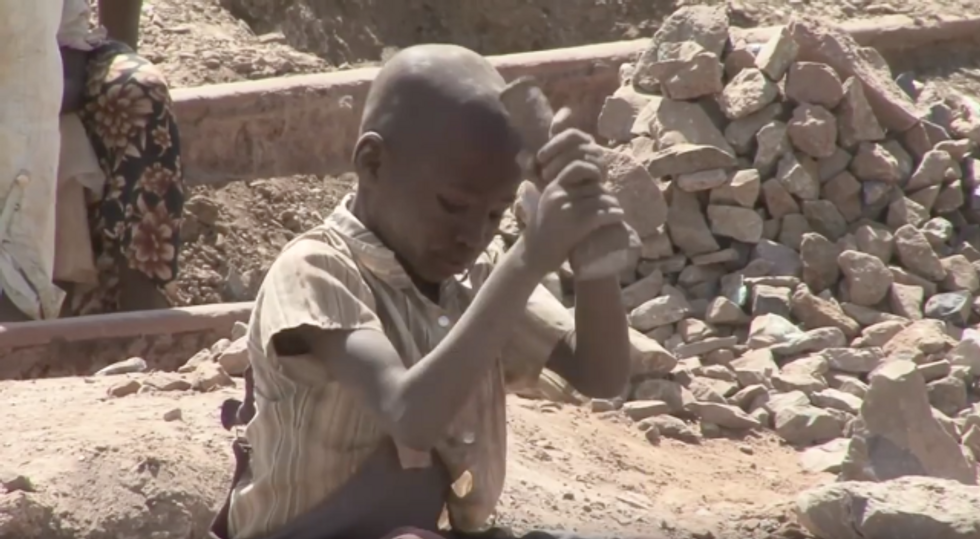 Who's working hard so that they have plenty of free $peech for election season? Our gorgeous corporate persons, that's who. (Eating fondue in Switzerland counts as work. Won't someone think of the jet lagged???)

This week, the annual Davos circle jerk hosted spirited debates concerning the future of artificial intelligence and robotics. Future Robot overlords - Good, or bad? Grab a magnum of bubbly and let's check out a panel.

According to one panel, most of the serious people seemed cool with AI Robots taking millions of jerbs from dumb humanoids who can't even defeat Russian Grandmasters at a game of chess. And the robot that killed a Volkswagen worker last year is nothing to worry about.

[contextly_sidebar id="NA7OVOLSpomjARwD8PqV4bgkra74ZneJ"]But where do we draw the line? Machines displacing millions of workers in manufacturing, education and health care? A-Ok. But what about Machines taking macho soldier killing jobs?

Stuart Russell, who is also a member of the International Committee for Robot Arms Control (ICRAC), said it was theoretically possible to introduce killing machines to the battlefield in a few years if the will is there. He gave an example of quadcopters that could be fitted with weapons and sensors to selectively target and eliminate certain individuals or whole groups of people autonomously.

Taking the power out of the joystick hands of morally flexible drone operators. This is what progress is all about. And Michael Bay can finally make a war movie about characters he really identifies with.

Chances are you're reading this on a product of child labor. Have a nice day.

[contextly_sidebar id="A9v7kLb2B244bTQJGrl2zqyClXSuaGaZ"]If robots are going to corner the market on manufacturing, elder care and noodle making, what's left for the rest of us?

How about mining for the minerals needed to provide for constant smartphone upgrades? And who's the best at getting in the nooks and crannies for these precious earthly substances? Why, impoverished children from a war torn country with incredible mineral wealth, of course!

Children as young as seven are working 12-hour days in dangerous conditions in the Democratic Republic of the Congo to mine the cobalt many global tech firms use in their smartphones, computers and cars, according to a report Amnesty International and African Resources Watch (Afrewatch) released today. The report claims the companies, which include Apple, Microsoft and Samsung, are not performing the basic checks that would ensure mineral mining operations don’t use child labor.

Congo Dongfang Mining is the corporation in question. They're owned by Chinese mineral company Huayou Cobalt. These guys sell batteries to a lot of our favorite corporate tech people. And cobalt is the thing that gives these batteries extended life. How? No idea. Cobalt may contain battery life-extending pixies for all we know. But the next time you have 17 apps open and you're whining about battery life, these are the kids you need to blame.

Samsung, Sony and Vodafone denied having connections to this mining company. Apple corpsplained some argle bargle about "evaluating to determine risks" while Microsoft said it doesn't even pay attention to shit happening at the "smelter level..due to the complexity and resources required.”

That's Microsoft corpsplaining to us that it's too visionary and important to get bogged down in the "what" that it's putting into its products. On the other hand, Yr Wonkette lives by a simpler "you smelt it, you dealt it" motto when it comes to essentially financing child slave labor.

Congo is an incredibly sad place where working backbreaking labor for $1 a day isn't even necessarily the worst thing that can happen to an eight year old. Congo is also not in the middle east and is very short of ISIS, so our media don't have to cover it and politicians don't have to pretend to care about its people. On the other hand, the world's Corporate People DO care since there's an estimated $24 trillion worth of conflict mineral wealth waiting to be extracted from Congolese soil. Maybe as the extraction industries and their customers grow richer, the wealth will trickle down to the child miners eventually.

Let's lighten up the mood with a tale about a douchebag. Last October, Taco Bell marketing executive Benjamin Golden got all shitfaced. Then, when he was acting all drunk and couldn't accurately slur directions to his destination, Uber driver Edward Caban politely threw Golden's lightweight ass out of the car. So of course Golden assaulted his Uber driver before Caban pepper sprayed him and then everyone had a good laugh when Caban uploaded a video of the assault to the trusty ol' internet. In the aftermath, criminal charges were brought against Golden and Caban is currently suing him for the assault to the tune of a reasonable $25,000.

As for the leader of its "mobile commerce and innovation initiatives," Taco Bell decided it did not want their brand associated with something so gross and decided to fire Golden. The hard-shelled executive went on to show a softer side in a teary TV interview expressing remorse that he got caught on video. Like any good white collar savage, he's obviously a really great person and blamed his crime on a foggy booze haze. The story was left to the annals of morning show filler and there it needed to lie.

[contextly_sidebar id="isiu9YaZRW5C2szuj8gQsFJrepJ7nIjE"]Yet, apparently jealous of all the awesome attention Martin Shkreli is receiving, Golden just decided to countersue Caban for $5 million(!), claiming the video was recorded without his consent. Not sure if we agree with your legal team, Ben, but Golden is pursuing his monies and alleging all of the bullshit.

According to court documents quoted by CNBC, Golden claims that he "fear[ed] for his safety and well-being" after being ejected from the vehicle and has "suffered severe emotional distress, humiliation, anxiety, fear, pain and suffering and the loss of his job."

Oh yes. The man who "couldn't remember" what happened now clearly remembers how afraid he was when his victim tossed him out on the mean streets of Costa Mesa, CA. What a poorly conceived, disgusting and somewhat cheesy countersuit. This is the Taco Bell of countersuits.