Corporations And Celebrities Agree: Anti-Gay Indiana Can Get Bent 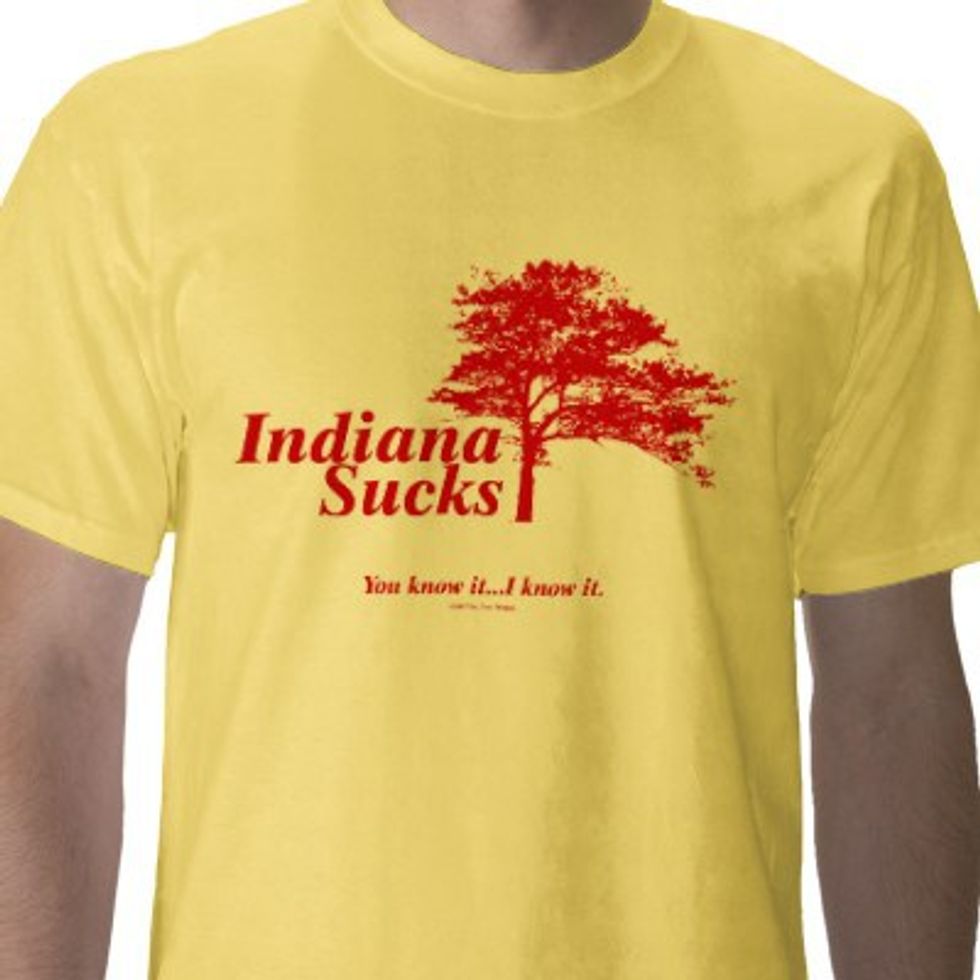 On Thursday, wingnut Indiana Gov. Mike Pence signed his state's Fuck The Gays bill into law, which basically says that as long as your religion tells you Jesus's first and only question on Judgment Day will be "and how many of my gay children did you personally abuse?", you are free to use those beliefs to deny LGBT people service and accommodations in the forgotten, godforsaken state of Indiana. Gov. Pence did so because apparently the threat of losing tourism dollars and business is less important than making sure nobody forces Aunt Lurlene to bake a pie for a fag. This is called Religious Freedom, and it is somehow what this great nation was founded upon, according to idiots.

The Disciples of Christ denomination issued a statement saying, basically, "We don't think Jesus is a bigot, and we might have to take our huge annual convention elsewhere if you sign this." Gen Con, the largest gaming convention in the country, said they might just have to do the same when their contract expires in 2020, depriving the state of some $50 million in tourism moneys per year.

Now companies are starting to come through on those promises! Salesforce, a $43 billion software company, is making good on threats to pick up and leave Indiana if Pence signed the bill. Scott McCorkle, CEO of Salesforce's Marketing Cloud division, had explained in a previous letter that you simply can't attract the best and brightest people if some of those people have to worry they'll be forced to endure legalized discrimination at the hands of Bible-beating bigots (not the best and brightest) as a part of their daily life.

The New Civil Rights Movement reports, in a series of tweets, Salesforce CEO Marc Benioff confirmed that no, these were not idle threats, because fuck you, Indiana:

Bye bye, those moneys! How else are the theocratic fuckweasels of Indiana going to bring harm to the good people of the state of Indiana, not just LGBT people, but all people whose livelihoods depend on corporations like these?

Think Progress reports that Yelp is pretty pissed off as well, not only at Indiana, but ANY state considering these laws. Here is a fun part of Yelp's open letter to the Backward States, signed by Yelp CEO Jeremy Stoppelman:

While Indiana is the most recent state to enact a law allowing for this kind of discrimination by businesses, unfortunately measures are being debated in other states across the country that would follow Indiana’s example. These laws set a terrible precedent that will likely harm the broader economic health of the states where they have been adopted, the businesses currently operating in those states and, most importantly, the consumers who could be victimized under these laws.

Just as I said in my letter to Governor Brewer, it is unconscionable to imagine that Yelp would create, maintain, or expand a significant business presence in any state that encouraged discrimination by businesses against our employees, or consumers at large. I encourage states that are considering passing laws like the one rejected by Arizona or adopted by Indiana to reconsider and abandon these discriminatory actions. (We’re looking at you, Arkansas.)

BUT WAIT, THERE'S MORE! The city of San Francisco is just going to cold-boycott Indiana, by refusing to fly into the air and land the entire city in the middle of one of the state's many open expanses of void, despair, and nothingness. Just kidding, but San Francisco Mayor Edwin Lee has announced that, from now on, city employees will not be permitted to travel to Indiana for anything related to their work:

San Francisco Mayor Edwin M. Lee announced that he is banning all city-funded trips to Indiana in light of the passing of what some call discriminatory legislation.

"We stand united as San Franciscans to condemn Indiana's new discriminatory law, and will work together to protect the civil rights of all Americans including lesbian, gay, bisexual and transgender individuals," Lee said in a statement.

Lee ordered city departments to bar city employees from taking work-related trips to Indiana on the taxpayer's dime unless it's necessary for public health and safety.

Also pissed off, but not taking concrete action (so far), are Apple, Eli Lilly, and the NCAA. Wouldn't it suck if the NCAA pulled out of Indianapolis, all because a rabid cohort who are rapidly aging out of human life can't stand gay people? It could happen!

Think Progress also collected an assortment of Mean Tweets directed at Gov. Pence, from Hillary Clinton, Ashton Kutcher, George Takei, and James Van Der Beek, but we have picked our favorite Celebrity Twitter rant, and it is from Audra McDonald, the immensely talented Tony Award-winning singer and actress. She has some QUESTIONS for Gov. Pence and his cohort of Stone Age troglodytes:

We would say "Brava!" but she's probably heard that so many times she's bored by it. But if you're not down for that kind of Nice Time, being a terrible Wonkette reader, Miley Cyrus is probably more your speed. She just called Mike Pence an asshole and dropped the mic.