Cory Booker Just Called Kirstjen Nielsen A Complicit Asshole, And We Are HERE FOR IT 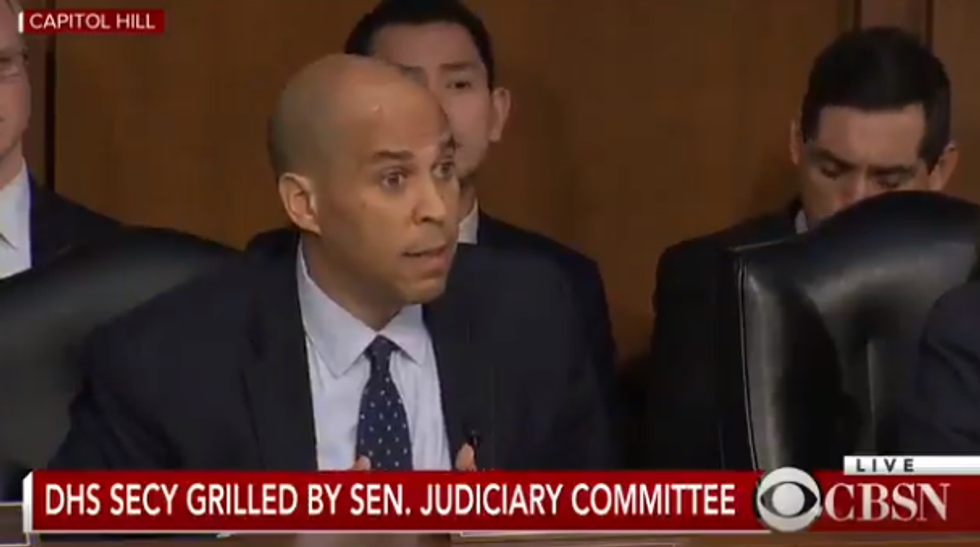 Man oh man, these senators on the Judiciary Committee are not having any malarkey from Homeland Security Chief Kirstjen Nielsen! We already told you about Democratic senators Dick Durbin and Pat Leahy giving her the what-for about her VERY CONVENIENT MEMORY LOSS as to what specific racist cusses the president said in last Thursday's "shithole" meeting. She remembers vividly that everybody was saying F-words and S-words and probably some OMGs and LMAOs too. It was appalling! She just doesn't remember whether Donald Trump had a shitfit in his shitcaked panties and started screaming "shithole" about all the "shithouse" countries that keep sending us immigrants, whereas the nice white people countries like Norway don't send NOBODY! Moreover, she remembers Senator Lindsey Graham telling Trump his business, but strangely has amnesia as to what it was all about. Maybe they were arguing about who won their last golf game or whose turn is it to buy dinner!

Speaking of amnesia, Senator Cory Booker (D-He's Running) had some WORDS TO SAY about Nielsen's amnesia, and oh boy was he mad! Here are some videos and pull quotes, but you should really WATCH THE WHOLE THING, as they say on internet dot com:

Cory Booker: "We have a history that is beautiful and grand and also ugly. From this nation to others, we know what happens when people are bystanders and say nothing." (via CBS) pic.twitter.com/I43rklf1JB