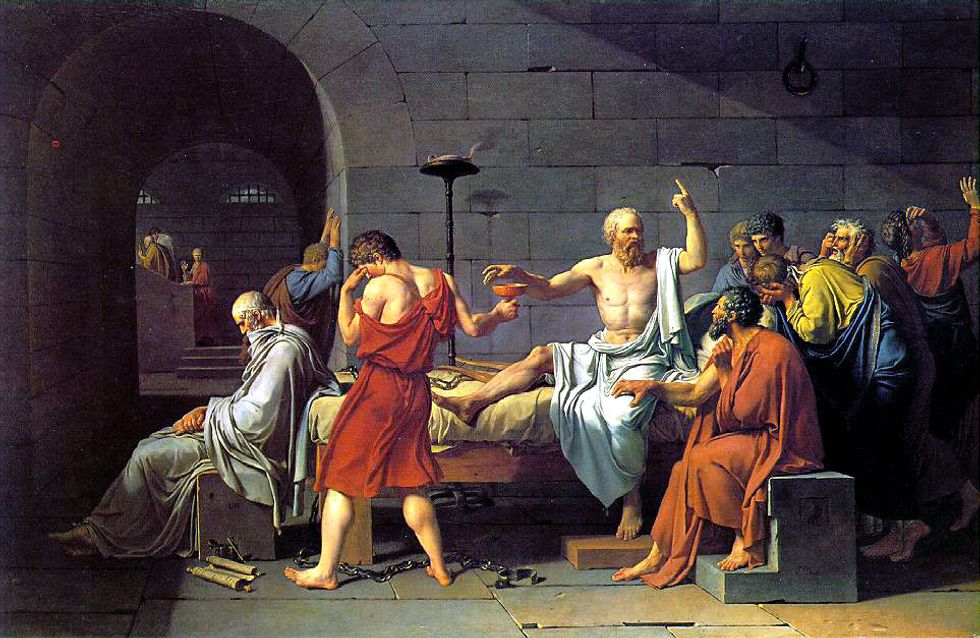 'The Death of a Salesman,' by Duke Ellington

This is a follow-up to my less-than-favorably received post yesterday, where I argued that Hillary Clinton didn’t win the debate the night before, so much as Donald Trump lost it. This post is part mea culpa, part still, don’t be an asshole. I don't want to spoil it, but the don't be an asshole part is much longer.

Counterpoint: Trump Lost, But Only Because He Hung Himself From His Own Dick

The original headline diminishes Hillary. She absolutely did have a good debate after the first 20 minutes. Yes, I maintain that those first 20 minutes were not the greatest for her, whether she was playing to some grander strategy or not, and I’m far from alone even in lefty circles.

But, later in the debate, she successfully got Trump to shit himself, she knew to sit back and let Trump shit himself, and when the time was right, she expertly demonstrated how badly Trump had just shit himself. I should have given much more credit for that part of her performance.

Please understand that my disappointment was mostly because I had very high expectations for her going in. Though it didn't come through in my post, I happen to think she's normally an excellent debater, and I thought she would cut through Trump like a super great cutting thing cuts though something easy to cut. I don't think she did that, but she did more than enough to win and I should have given her her due (as if she cares what I think).

Still, Don’t Be An Asshole

I wrote a post about what I saw as Hillary’s missed opportunities against Trump. My view was that Trump blew it more than Hillary blew him away.

This doesn’t make me a mansplainer, or an MRA guy, or an apologist for Trump’s racism (?), or a good fit for Breitbart, all of which were suggested in the comments.

I’ve been doing this long enough to know that people would definitely take their craps on the post, because it went against the mood of the moment, and in retrospect it didn’t give Hillary enough credit. I’ve had lots of critics on other posts.

But what bothered me to the point of getting actually pissed off was that nobody (else) challenged the premise that writing a post critical of Hillary meant that I must be a mansplaining MRA Trumpkin.

Just one, “Actually, he’s only writing what he thought about the debate (even if I think he’s wrong and dumb)” would have been nice, friends! Even the part about how I am dumb!

There were no negative gendered phrases or terms in what I wrote, overt or implied. That’s because I was just writing what I thought about the debate.

I can’t show you my heart or my true beliefs, but I can tell you with words that I was holding Hillary only to this standard: Have the best debate possible, and hurt Trump as much as possible. I did not add “…for a woman” or “…if she can avoid being so frigid for once!” neither mentally, nor in what I wrote.

It frankly sucks to have your character impugned for expressing an opinion as benign (I thought) as “I don’t agree that Hillary was great in that debate.” In fact, that tendency to maul dissenters with ad hominem is one of the things that most repels me from the right.

One reason we love Wonkette is because at Wonkette, we delight in mocking this habit when the right does it. We correctly say that this is precisely why their political beliefs tend to be so fucking dumb: Nobody can depart from the orthodoxy or they’re thrown out of the treehouse.

Let’s please not be that, okay? If there is any public spiritedness behind this post (and there isn’t much), it’s that I see this same tendency growing on the left, and I think it’s a bad trend. If we are the smart, rational ones, let’s meet dissent smartly and rationally. I am not saying that I have always met dissent smartly or rationally. Just, let’s all of us try, okay? I’ll try too, it’ll be nice.

So basically I’m going to continue to criticize Hillary when I feel it’s warranted, and I’ll absolutely continue to praise her most sycophantically when she does good (which I have done many times before, and I fucking voted for her in the primary back when it was competitive even though I also liked Bernie, so there!) And every single time, I will fess when I have been unfair or just plain wrong.

But if your view is that I can’t be critical of Hillary, or even mistakenly unfair to Hillary, without the root cause being that I am a shitty misogynist, then you can absolutely go fuck yourself.