Cracker Barrel Comes To Its Senses And Remembers Who Eats There 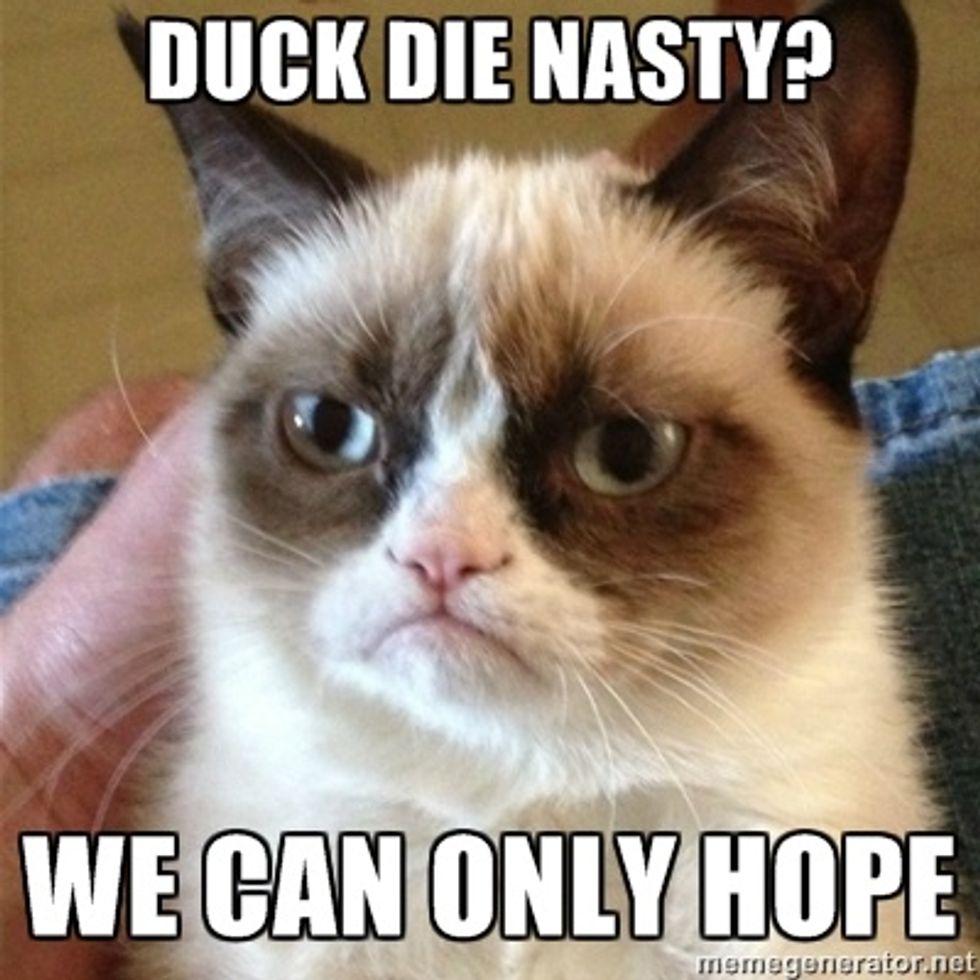 Handling the fallout from a celebrity kerfuffle is supposed to be sort of predictable. A sportsball player has an affair or announces he's in favor of death camps, and all the product licensing deals vanish overnight. That's how the script is supposed to go. But the poor corporate overlords at Cracker Barrel badly misjudged just how much their clientele would respond to the homophobic, racist comments of Duck Dynasty star Phil Robertson. Instead of being put off by his announcement that homosexuals are hellbound and the blacks were much happier under Jim Crow, they ate that shit up, and turned the guy into a bona fide Culture Wars martyr. Hickmerica therefore did not care for Cracker Barrel's decision Friday to remove some Duck Dynasty products from its stores, and so an instantTwitter shitstorm ensued, and a "Boycott Cracker Barrel" page on faceplace got thousands of "likes" within hours, which is how Americans vote today. Cracker Barrel's initial statement that it operates "within the ideals of fairness, mutual respect and equal treatment of all people" but acknowledging that it had "removed selected products which we were concerned might offend some of our guests" simply proved that Cracker Barrel, as one discussion thread on Ann Coulter's official website put it, chose "gays over Christians."

Great American Mike Huckabee called for a boycott, because Jesus:

“Cracker Barrel has decided it wanted to be the first big corporate sponsor to distance itself from Phil Robertson and in doing so, it has decided it doesn’t want ‘his kind,’ in their stores,” Huckabee said on Facebook. “Well, I’m ‘his kind,’ so they won’t be seeing me at their tables in the future.”

He added: “If it’s his Christian beliefs that make them uncomfortable, then we all need to know.”

Happily, the honchos at the BarrelPlex quickly recognized the error of their ways, and returned all the merch to the shelves, issuing an apology to the butthurt masses to make it absolutely clear that they can continue to stuff their gullets with lard without worrying that the corporation didn't share their prejudices.

"When we made the decision to remove and evaluate certain Duck Dynasty items, we offended many of our loyal customers. Our intent was to avoid offending, but that's just what we've done.

"You told us we made a mistake. And, you weren't shy about it. You wrote, you called and you took to social media to express your thoughts and feelings. You flat out told us we were wrong."

Still, the company's willingness to briefly treat Robinson as if he'd said something offensive left some good Christians wary, such as this nice lady quoted in a story on Christian Post:

"Cracker Barrel. Was it the almighty dollar that changed your mind? Because now that you opened this can of worms, most Christians want to know exactly where you stand on the issue of homosexuality."

It is expected that the possibility of backlash is slim, since any potential gay boycott of Cracker Barrel is likely to have as much impact on the company's bottom line as a tea party boycott of Ebony magazine.

Follow Doktor Zoom on Twitter, or he'll tell everyone he saw you reading Das Kapital at Cracker Barrel.