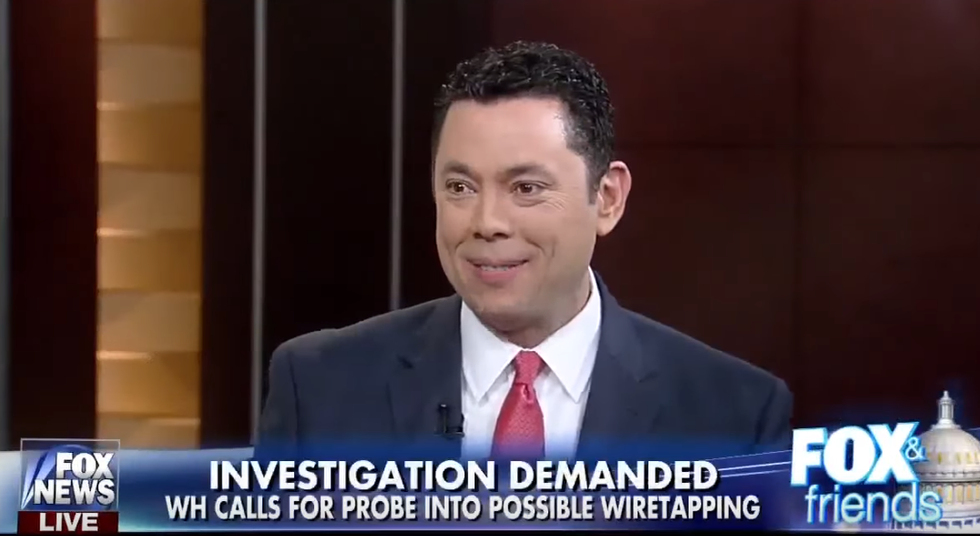 Is this really the face of somebody who knows something you don't know?

We all know that the old "stupid or evil?" question doesn't apply to Utah Rep. Jason Chaffetz, who's pretty sure he's still got tons of Hillary Clinton emails to investigate, and who thinks he's just too PRETTY for his own constituents to protest him and yell at him. It doesn't apply because the answer is clearly that he is both stupid and evil. Well here's yet another example of that!

Chaffetz visited the idiot couch at "Fox & Friends," which is a lot like the balls at Chuck E. Cheese, except there are no colorful plastic balls, and a whole lot more colorful diaper accidents, to tell Steve Doocy, Brian Kilmeade and Ainsley Earhardt that he has seen Donald Trump's tweets about Obama doing an "illegal wire tapp" to him, tweets for which there are NO EVIDENCE, and he's super excited to get right to investigatin' them!

KILMEADE: First off, when the tweets come out on Saturday, what are you thinking?

CHAFFETZ: Well wow! You wake up from the morning, you have no idea what's going to happen!

We know! It's like we have an incompetent, lying manchild in the Oval Office, and what's he gonna do next? Just kidding, Jason Chaffetz is not having an intelligent human reaction to Trump's Twitter tantrum:

This thing Donald Trump found inside his rectum. Seems like a fun thing to play with, doesn't it, congressman!?

CHAFFETZ: Devin Nunes and the House Intelligence Committee will take the lead on this, we'll play a role on the Oversight Committee, but I'm going to go into it eyes wide open ...

Oh great, Rep. Devin Nunes, all of whose pacifiers are Trump's Butt-flavored (allegedly!), will get right on it! Nunes, you'll recall, is one of the ones the Trump White House called and begged to make leaky leaky to the press that there are NO ties between Trump and Russia, and he came through when he did a presser saying JUST THAT. He also recently threatened to investigate the press, because you know, #reasons.

Devin Nunes and Jason Chaffetz are SO 'SCITED, because they get to do a fake investigation into a "scandal" that only exists because their "strong" "tough" "president" made it up.

CHAFFETZ: I've had experience, the Obama administration has been notorious on this type of stuff ...

ONE OF THE DUDES: What do you mean???

THE GIRL: You were a victim!

Oh God. Chaffetz then launched into a hissy about how "over 40" of Obama's Secret Service employees illegally leaked stuff on him and nobody was punished ever. The truth, because Chaffetz is a liar and won't tell you, is that 41 Secret Service employees were punished, and it was Obama's Department Of Homeland Security that did the investigation and punished the folks.

Chaffetz also bitches about the oh-so-terrible way Obama's IRS investigated conservative groups, just for being conservatives. That story is completely true, in wingnut idiots' minds, but not in real life.

About his newest Trump dingleberry investigation, Chaffetz says he doesn't know what they're going to uncover, but he's surely excited to find out. Now, Wonkette couldn't tell for sure from watching the Fox video, but we're going to GUESS Chaffetz jizzed himself right about then.

Here, off the top of our head, are a few things Chaffetz could be seriously investigating, if he was a growned-up boy who wasn't going to be denied entry into Mormon heaven, on account of how he lies and he sucks:

Like we said, those are just ideas off the top of our heads. Come up with more in the comments, or just use the comments to tell Jason Chaffetz to go fuck himself, we don't care.

Wonkette is totally reader-supported, so if you like it when we call Jason Chaffetz names, throw us a few dollars!